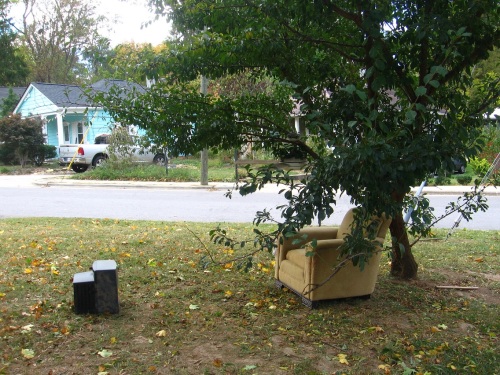 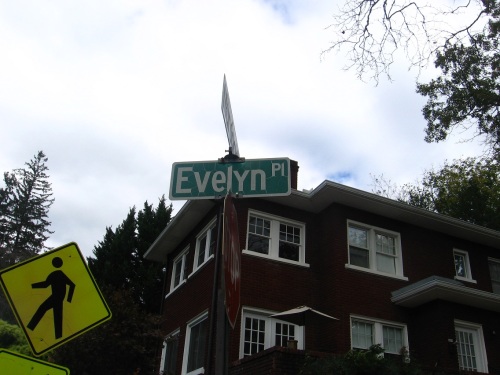 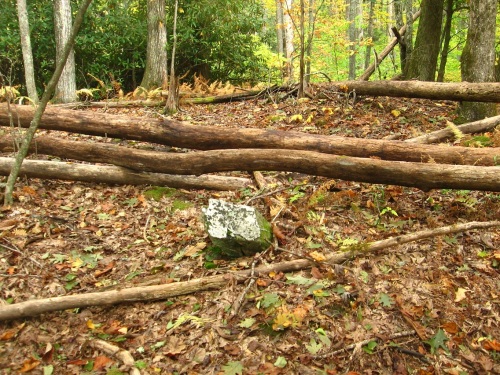 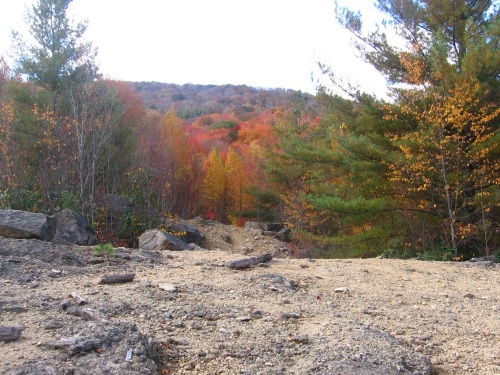 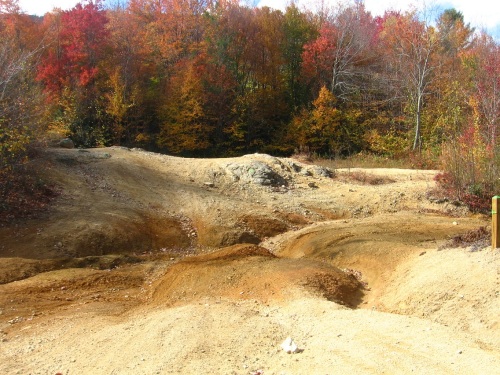 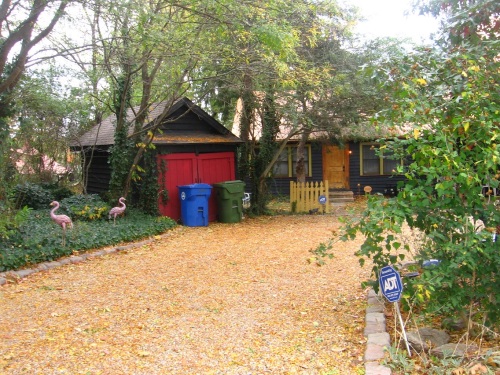 More photos from Winner/Fairyland on The Beach. Some obvious comparisons can be drawn to Bigfoot’s recent toy happening called Chesterton.

This appears to be the central structure of the toy community. 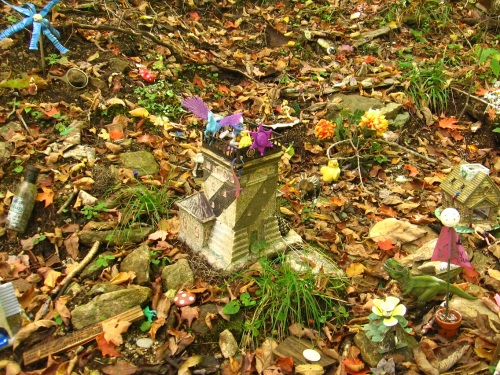 Details of the center. Compare it to this photo coming from Chesterton the past summer, for example. Several resonant elements. 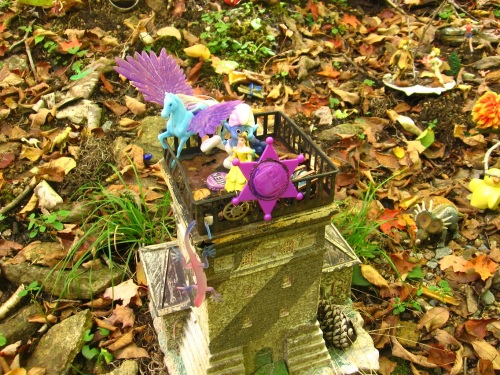 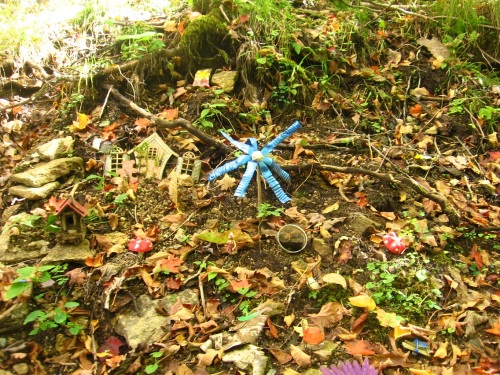 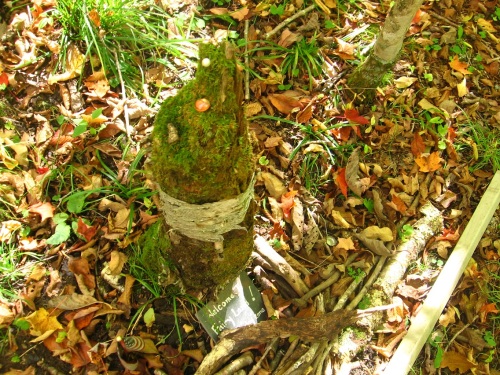 These photos of Winner/Fairyland come from 2 separate, recent visits to The Beach. On the second trip, I also explored a small wilderness region on the eastern part of the large mountain, on the other side of the town from Darkside and Ozland. I do not have a name for it yet. The headwaters of the stream passing by Winner/Fairland are found there. This same stream passes the rock pictured here in the previous blog post.

Example of one of the many rocks found in this eastern wilderness. 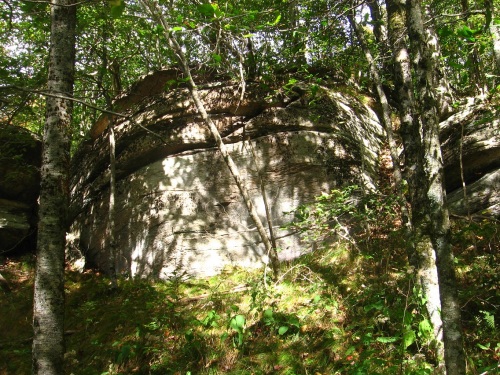 I haven’t been to Darkside up on The Beach (mtn.) in about 2 years, and apparently I haven’t even blogged about it in around 6. Great place! It’s just west of Ozland, which is definitely off-limits for trespassing now, unlike in the far past. Use to be I could go up there and wander down the yellow brick road and not worry about it too much. No longer. People get arrested. Oz is not the laid back place of the 90s and 00s. And it cost a whole lot more to get in now during the days it’s open — once was free! But back to Darkside and happier news.

My Darkside pictures actually didn’t turn out too great this day. Bright sunlight was one culprit. The other was the dense foliage remaining for this late in the year. Been very warm in the Blue Mountain area for certain. Looks like the leaves will be peaking about 1 week later than usual. So today I had no great shots of the famed Temple of the Moon, nor Observation Rock or other prominent Darkside stones. I may return in late October or November.

So below we have what I call Cathedral Rock, I believe, with a much smaller one called Tombstone Rock perched on top. Obvious descriptive term.

This more open and barren slice of land at the front of Cathedral Rock may be the site of a toy happening sometime soon. Perhaps even late October? A possibility. I don’t plan to employ Bigfoot for the same, at any rate, not until next spring/summer/fall. More on Bigfoot thoughts soon — subject of another post.

Amazing views looking over the south lip of Darkside. 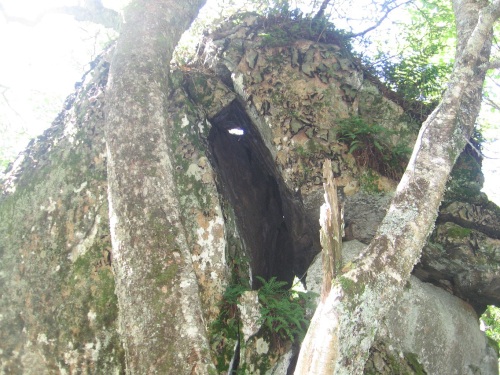 Silhouettes of smaller rocks in the western part of the Darkside bowl.

The top of Pentagon Rock, which, true to its applied name, has 5 sides. I’ve blogged about it and Hobbit Rock in the past.

The top of the Temple of the Moon, the largest standalone rock of the complex.

Temple of the Moon. 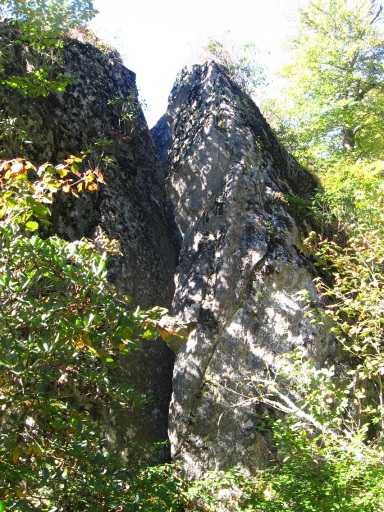 The same day I explored an official trail of The Beach, and took a picture of another rock laying against a pool between two waterfalls, large and small. This has always been one of my favorite spots on the mountain. 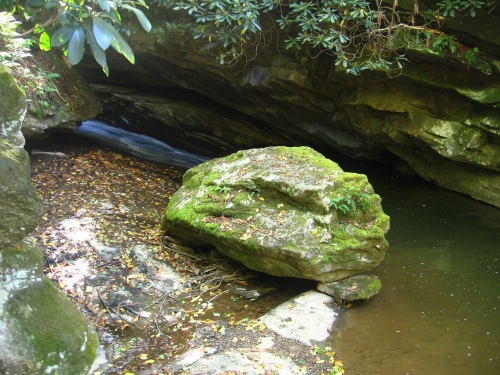 And the fantasy berg I called Winner in several posts from about 2 years ago (LINK LINK LINK) still exists. It seems to have adopted the name Fairyland in the meantime. I like Winner better. 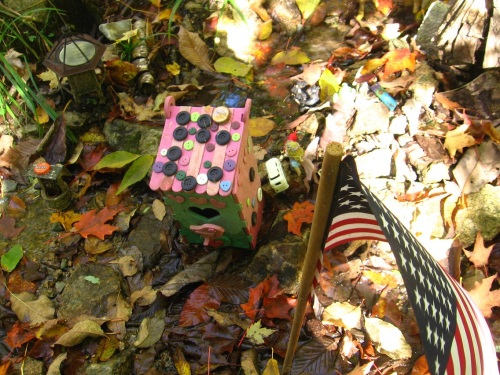 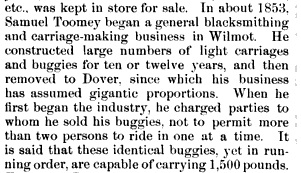 Martha invited Hurley inside for tea while she relayed the background with Sam and the numbers. She said that one night — about 16 years before Hurley’s visit — a voice appeared in the static “repeating those numbers over and over again”. Sam used the numbers to win $50,000 in a “Guess the Number of Beans” (within 10) contest at the fair in Kalgoorlie. Martha said the jar “must have been big as a pony, and it’s filled to the rim”, commenting that the man “had been running the same scam for 40 years and nobody had ever come close” until Sam hit it exactly by using all the Numbers (4,8,15,16,23,42).

On their way home from the fair, Sam and his wife were hit head-on by a truck that blew a tire on the highway, and Martha lost her leg, while Sam escaped without a scratch. Toomey blamed that, as well as future unlucky occurrences, on the Numbers. Those occurrences continued until he committed suicide “to end the curse”.

Another thing of note, perhaps: Barrs Mill usurped original name of Willards Mill for Beach City, but presently there is another Barrs Mill in the area (lower part of above map). Barrs Mill is not mentioned in the Stark County history book quoted above, but is in the below newspaper article concerning the history of Beach City (July 3, 1976 · The Evening Independent from Massillon, Ohio · Page 46). 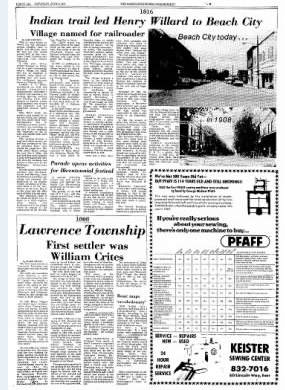 FORTY SIX SATURDAY, JULY 3,1976 THE MASSILLON EVENING INDEPENDENT 1816 Indian trail led Henry Willard to Beach City Village named for railroader By AMY SHRIVER What is today known as Beach City has undergone several changes, both in name and character since the area was first settled around 1816. At thst time, Sugar Creek Township was separated from Canton Township. In this year, Henry Willard followed an Indian trail to a point overlooking today’s village. He chose this si’,e to construct a gristmill, using stones for grinding corn and wheat. The settlement became known as Willards Mills. LATER, F. V. BELL purchased the mill and made ‘numerous improvements. Bell added a sawmill and machinery for carding, spinning, weaving and dressing cloth. Bell became so popular among local residents that Willard was forgotten and the settlement becatne Bell’s Mills. After Bell’s death, the property was passed on to his son, Philip and George. The mill failed under their management due to bankruptcy of some eastern creditors and swindling on the part of two employes who reportedly lit out of town and headed west with full pockets. After passing through a long list of other owners, the mill was purchased in 1850 by Jonathan Barr, who rebuilt the properties. The fickle public began culling the area Barr’s Mills. His grist and flour mills supplied a large merchant trade until 1934 when the buildings and land were taken over for the Muskingum Conservancy District.

Returning to the Magic Book…

Past the pond and along a path that followed Wine Creek he [Willard] went until he came to a grove of beech trees.

A fairy city (“Winner”) I found recently along a path or trail atop Beach (mountain). Another implied Beach City, then.

This makes the presence of a Trail near Winesburg more important, seemingly (in above map again). And on Indian Trail Creek.

The young reporter was thinking of Kate Swift, who had once been his school teacher. On the evening before he had gone to her house to get a book she wanted him to read and had been alone with her for an hour. For the fourth or fifth time the woman had talked to him with great earnestness and he could not make out what she meant by her talk. He began to believe she must be in love with him and the thought was both pleasing and annoying.

Up from the log he sprang and began to pile sticks on the fire. Looking about to be sure he was alone he talked aloud pretending he was in the presence of the woman, “Oh, you’re just letting on, you know you are,” he declared. “I am going to find out about you. You wait and see.”

Will take the toys. Harrisonia is an important microcosm. You’ll see. Inspired by microcosm found on Beach. “A Rubi friend”? Strang.

A ticket sold in Winner for the May 27, 2009 Powerball drawing won the jackpot. The ticket was claimed at South Dakota Lottery headquarters in Pierre, on June 5. The winner, Neal Wanless, chose the cash option, and received approximately $88.5 million after withholdings.[11]

North Carolina, coached by Dean Smith, won the national title with a 63-62 victory in the final game over Georgetown, coached by John Thompson. James Worthy of North Carolina was named the tournament’s Most Outstanding Player.

North Carolina State, coached by Jim Valvano, won the national title with a 54-52 victory in the final game over Houston, coached by Guy Lewis. The ending of the final is one of the most famous in college basketball history, with a buzzer-beating dunk by Lorenzo Charles, off a high, arching air ball from 30 feet out by Dereck Whittenburg providing the final margin. This contributed to the nickname given to North Carolina State, the “Cardiac Pack”, a reference to their often close games that came down to the wire — in fact, the team won 7 of its last 9 games after trailing with a minute left in the game. Both Charles’s dunk and Valvano’s running around the court in celebration immediately after the game have been staples of NCAA tournament coverage ever since. North Carolina State’s victory has often been considered one of the greatest upsets in college basketball history. 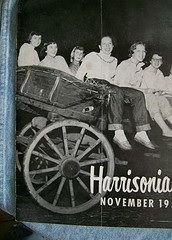 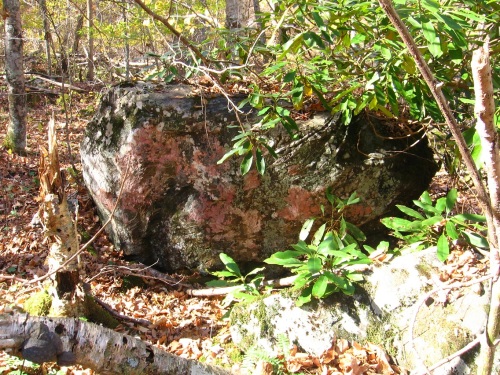 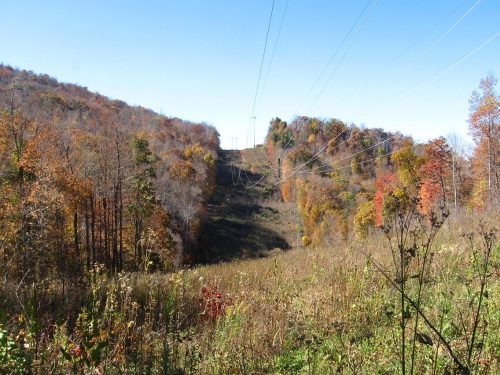 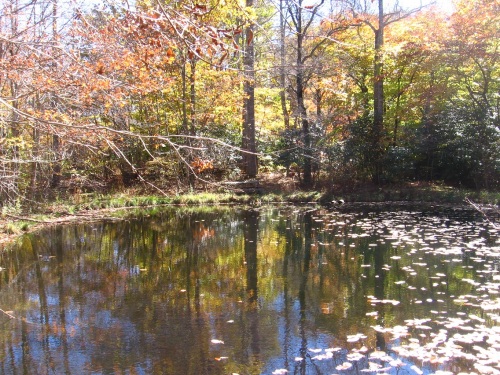 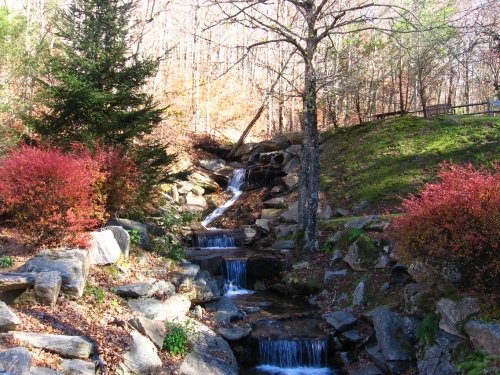