I didn’t want to go too long without supplying the text for this particular post concerning Whitehead Crossing, which gives pictures from probably my most successful and satisfying day of hiking in the area. Most of my pictures didn’t turn out that well however. It’s tough to take good ones in such confined areas. Below is the example of some stuff I had to crawl beside to get from one place to another — rhododendrons abounded. I had to be more mindful of hiking choices, else I could get not really lost, per se, but end up having to backtrack a longer way. I was attempting to let the woods tell me the directions I should go. And, lucky for me, it pretty well worked! 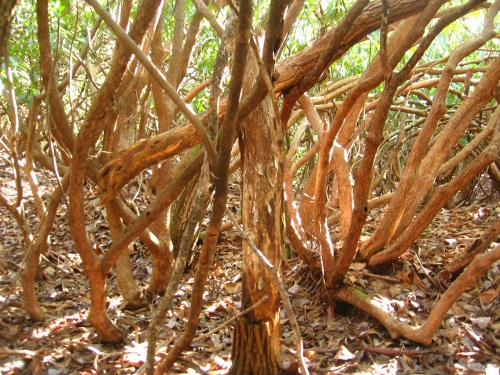 I’ve seen the very interesting white rock pictured below once before on a hike several years back. It exists beside Green Stream, but well below Whitehead Crossing and even Con Creek — more toward the mouth of the stream where it enters Spoon Fork at the lower end of the Korean Channel. Difficult to explain without a map; I’ll put that on my tado list for the new year. Just for the record, I reached this place on Green Stream from an area I’ve called Fi in the past. I talk a little about it at the end of this April 2013 post.

Green Stream tumbles through some low cascades in this more confined area, quite similar to Red Head but perhaps not quite as dramatic. But the comparison can certainly be made. So it’s a kind of “lower Red Head”. Today I found an easier way into this area than before through Fi, a new discovery.

Interesting flat rock of the area. Probably not another grave marker, however. I don’t think.

The we switch over to the next day (1/3/16) for the last snapshots of this post. And here comes yet another odd Whitehead Crossing find. What we have pictured below is the remains of a *blue* crayfish on a long log running parallel to the Little Whitehead stream. Although I’ve seen regularly colored crayfish in the area, which appear mainly mud or brown or grey colored, I’ve never in my life spotted a blue one. Yet here it is in the midst of all else weird in The Crossing. And it’s simply been *pulverised”. When I showed this picture to my wife, she said it’s probably an *owl*, and when we googled blue + crayfish online (yes they actually exist in my area of the mountains) we found the main natural predator named was this very bird. Yes, owls have barged their way back into the picture in a pretty big way.

Little Whitehead’s source from the days before was drying up.

Curious “x” of sticks that the log with the pulverized blue crayfish points to. X marks the spot? 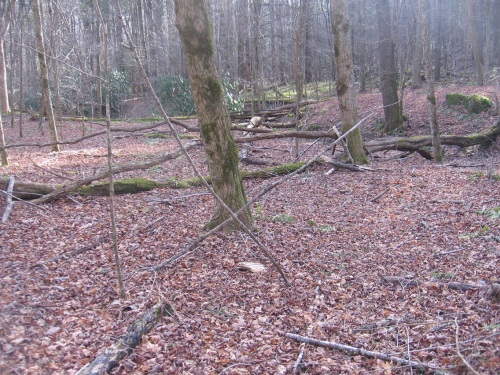 Orange fungus. Don’t know if this is typical for winter or caused by the warm weather.

More fungus, a cluster of round brown ones this time, and on the same log pictured above. 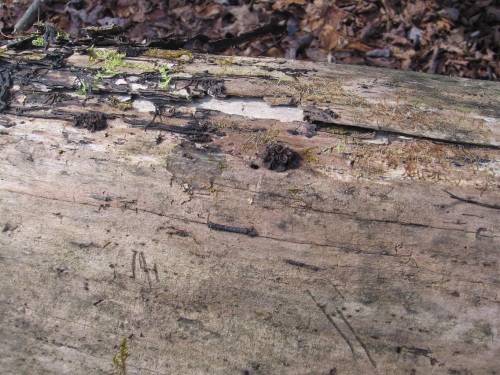 This rock cluster is beside Little Whitehead just across from the pulverized crayfish. It contains a quartz marking I presently call the White Shark or White Submarine. 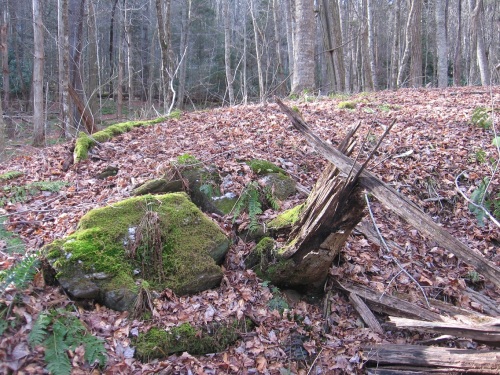 Whitehead Brook as it flows past Remorse Rock (right).

This day I also revisited the tiny Dogpatch Cemetery and its two graves, one marked and the other unmarked. Someone has cut the rhododendron back from the marked grave. Perhaps the involved family knows about these graves after all. Or is someone else tending to it?

Obviously a gold plated football helmet that is also an army helmet, like the one used to name Monkey City when I was a boy. Land of Reds and Yellows must play a role as well. Perhaps everyone is bushed there all the time. This is a way beyond Billfork. This is the Korean Channel.

Yes. Where is the Land of Reds and Yellows? Would that be Whitehead Crossing?

Unsure Hucka D. Let’s see, the Land of Blue and Purple would be entered through that log bridge, but the actual significance of that bridge is that it points to The Totem in Silverberg on the other side of the channel. I think a battle between Silverberg and Purpleland took place in the past. Purpleland grouped around the smaller of the 2 Silverberg streams, and Silverberg proper around the larger of the two, perhaps centered by Silver Pool.

(after a pause) Maybe Green Stream itself was originally known as the Silver Stream. Now this applies to Spoon Fork perhaps.

Very interesting the article compares the creation of cairns and fairy houses to crop circle formations. 🙂

Strange — this same blog features several posts on Whitehead, but Alfred North Whitehead in this case. One of the primary summits of tiny Monhegan Island, and around which I’m sure are found a goodly number of those fairy houses like the one pictured above, is named Whitehead, and that was what originally attracted my attention to it (not the fairy houses, which I just learned about in the last hour). This would be in resonance with the previously named Whitehead Crossing of Frank Park.

Speaking of which, I’ve just yesterday restored the 5-rock cairn at Dongoba, and might work on re-creating the biggest temple of the complex this spring/summer/fall. As I think I stated below somewhere, I decided not to move these 5 rocks just across the ridge to Whitehead Crossing for this restoration. The same would go for the bigger temple — rocks simply too large to move from this location, to name the major obstacle for this transfer of art. 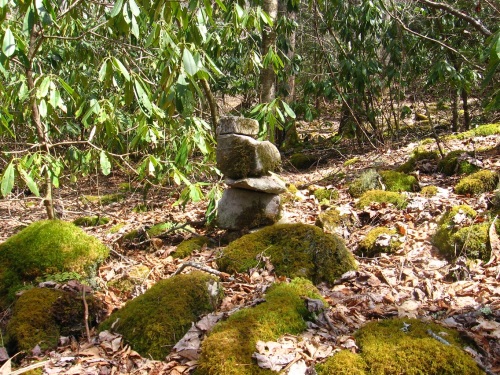 I would be very interested to see what the “immanence” blogger though of *this* type of woodsy art: an apparently continuing interaction with *something* in the woods that really, really seems to want to communicate with me — *is* communicating. The floating tree below at Concreek, just beside its namesake Concreek Falls, has already been the site of one of these types of communications, as I discussed in this Baker Blinker Blog post from last summer. Now a second one at the same site has taken place. And I’ve already formed an interpretation, very quickly in fact, and on the spot. I believe it could very well be a *map*, specifically a rudimentary one of a portion of Frank Park around Bill Mountain and Falmouth Creek, pointing in fact to this very spot on Concreek in symbolic fashion. Let’s take a look…

So here’s the scene now just below the root end of Concreek’s floating tree on The Island (compare with here). The broken off rhododendron branches, 3 in number, certainly *appear* to be placed here on purpose by human/humanoid hands, but, as they say, the medium is the message. This is land art, but also a communication, more direct and unambivalent. As I said, I believe it is a map. One of the first things I noticed upon stumbling on this configuration is that the two larger rhodo branchs were placed one behind the other, but with a certain distance between them. I interpreted this as one *following* the other, and thought of the aliens following *me* across the road from Bill Mountain and to Falmouth Creek across The Way. Notice that the rhodo branch closest to the floating tree’s bottom is prominently forked, and that a 3rd, smaller rhodo branch lies above the forked branch in the following photo. I interpreted this — again all this fell together or happened almost “at once” — as the path I created to Falmouth Creek and the art happening (set up bottles in a metal circle) there at Old Baker Settlement. I believe the “aliens” have taken the fork from the main path or road running alongside Bill Mountain and across The Way (represented by the 2 larger rhodo branches) and have gone to the art event to take a peek, at least in a remote way (perhaps through the pictures and texts of this blog). At any rate, they wanted to communicate this knowledge to me through the map. And continuing down the main fork would bring them to Concreek, and they had to come here obviously to place the branches — i.e., make their map. I know this sounds odd, but that’s what I strongly believe it is. And it is akin to crop circles in that the circles tend to use the same fields year after year to affect their own brand of alien-to-human communications. Needless to say I’ll be paying close attention to this floating tree in the months and years to come, with any further messages chronicled for this blog. At least I *hope* that’s what they want me to do.

One more thing I should mention about this configuration. There also appear to the right of the smallest of the 3 broken off rhodo branches two slender but quite sturdy “roots”, looking almost like antennae. This didn’t seem natural either, and I couldn’t figure out if these two very similar “branches” were actually roots or stems of some plants, or if they were broken off in the first place. I may have to return to this spot for more investigating, then.

Shifting now to a totally new blog location, we have Fi, certainly not as mysterious as Concreek yet, but still worthy of inclusion here. The place is in Frank Park once more, and somewhat between Norris Branch and Whitehead Crossing, southwest of the Woods of Howl. The two creeks involved, both tributaries of Green Stream like Whitehead Brook and Concreek, have also not be discussed in this blog yet, but come together not far downstream from the site of the below pictures (which seem to indicate several lichen tinted, derelict *temples*) These are just some preliminary photos, and I’ll return to this location soon for more blog storytelling. A preliminary name for this “temple” site is Fifill, and there seems to be a complementary and perhaps antagonistic Fifole to deal with here as well in this Land of Fi.

Solitary white rock that seems to be an indicator of something. 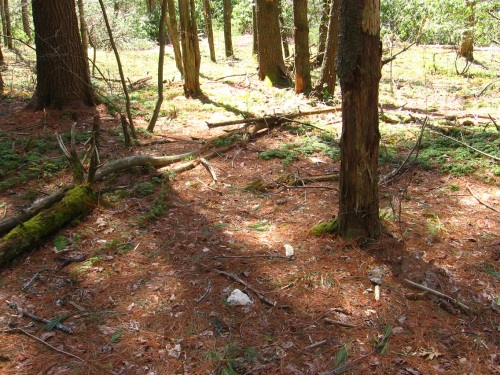