Iggy Stooge stares into the central sim of Blue Junkyards from the edge of his parents’ property. Is this really where he wants to settle down now that he’s been rejected by Baker B. for the current novel? This backwater place? He had dreams of city life in Regaltown, in Horns of Hatton even, the capital crown jewel of Maebaleia’s South. Not the Deep South: that was instead Cassandra City, but of similar size. He could have been police chief, fire chief, even mayor if Baker B. so chose.

But this bayou? He’s not a flatlander at heart and he knows it. There was one other option: return to Pipersville, where time is more fluid. Not as much as Golden Sink (hence the reasons for the auditions there), but still — the bomb and all. Another sinkhole (like Golden Sink). 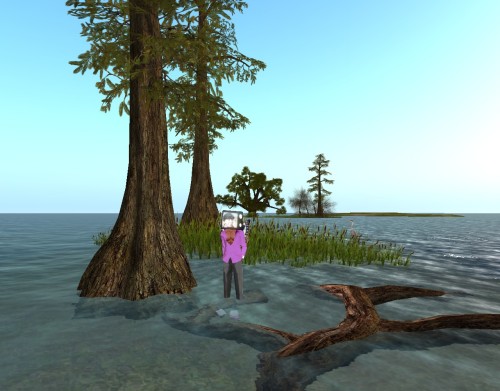 … and then eventually heads back home. Or his parents’ home actually. 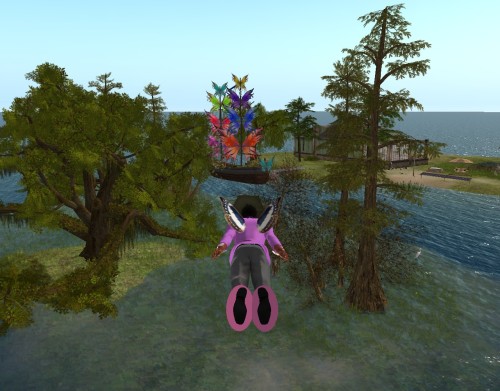 If only they weren’t so infatuated with those darn butterflies.

“What color breakfast do you want tomorrow, dear?”

Queer, thought Baker Bloch, back to exploring Blue Junkyards. I recognize this butterfly ship from Rosehaven. And (as he’s checking): owned by an actual Rosehavener (again: !). Well, in that nice Designing Worlds video on the region fleet commander Wildstar Beaumont did say his ships were deployed throughout Our Second Lyfe. I guess this is proof! Far far away from Rosehaven I would assume we are. 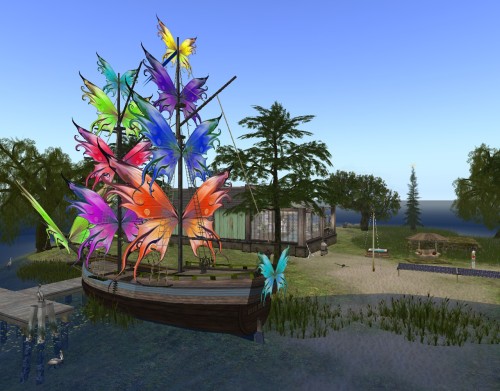 So another synchromystic link between Rosehaven and The Waste, since Blue Junkyards’ name is very similar to The Junkyard sim of latter.

And this just after I moved my Rosehaven Yarn Shop over right smack next to the *Yarn*a sim on Corsica last night (thanks Green Squirrel and Huma!).

Queerer and queerer. Maybe we’re not done with Rosehaven in the *present* yarn.

A seal and it’s (balancing?) balls (12 of ’em). Could be Tull(y) again.. Never got around to talking about the (Rosehaven) shape pullers, pheh.

What else could be here in Blue Junkyards to find?