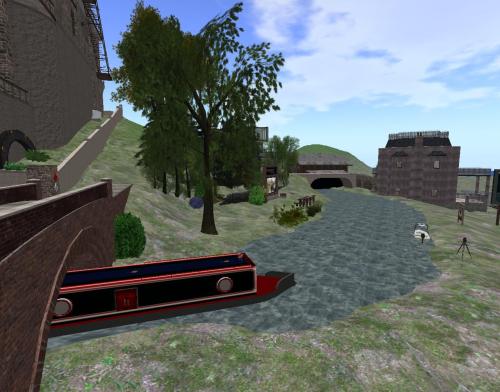 King Lewis Johnson the Third’s canal boat arrived at quarter past 2 in the morning’s evening’s night day. Time was wonky in this part of old or original WES, merely the precursor, as it turned out, of the considerably larger New WES constructed further up the western Jeogeot coastline, or what was soon shortened to NWES, along with the overarching New WES Island — NWES Island now, with further distance put between it and the Omega continent’s New Island as well. The Moth Man would be pleased. He’s written a novel about *his* New Island and doesn’t want another place of that name to come between him and fame. I don’t either (!). His New Island should be unique. A no. 10 type of paradise, hidden until now. Bravo!

Back to King Lewis Johnson the Third’s visit to Mad Anthony’s Nightfire settlement based on the Isle of Karma roleplaying sim. “We call those type of vehicles channel boats on Mars where I’m from. You’ll need a crowbar (to understand).” Mad Anthony, new lover of Linda Halsey, was clearly insane to think he was from Mars. Gary his manservant concubine beside him gently reminded the old, partially senile man that his home planet was Venus. He was not all right tonight. Marty’s Illuminati spell to soften his brains to tin or lead was working perfectly, another type of 10.

“It is time for me to go back home to my neighboring sim, Anthony. I’ll pick up the canal, um, *channel* boat later. I wish you well on your brain issue.” 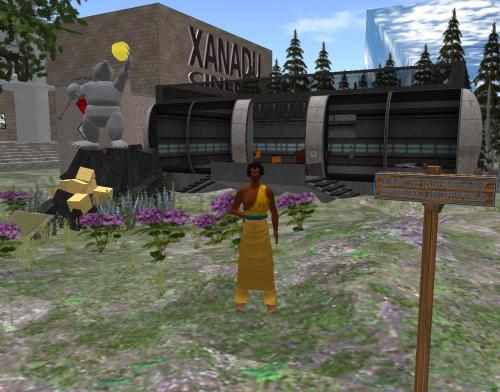 “Good night King Lewis Johnson the Third.” He looked at the sim boundary sign from his side. “You are indeed The Mann!” 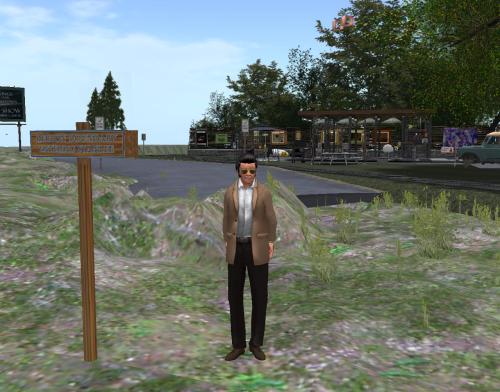 Poor pitiful thing, he thinks while walking away. 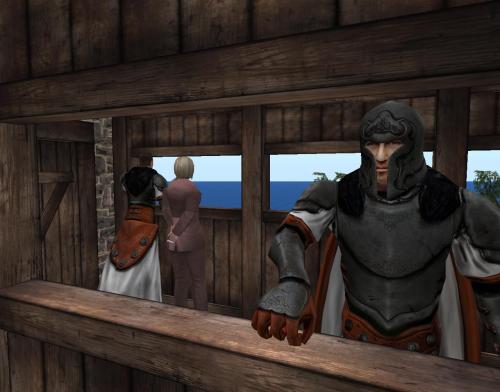 “What are we looking at, shipmateman?”

Reggie the shipmateman paused, then: “We’re looking for your husband Ms. Halsey.” She’d given the order not 15 minutes ago.

“Ms. Halsey, good,” replied Linda about her title. “Remember, don’t shoot till you see the whites of his eyes.”

“Yes, Ms. Halsey,” echoes the other shipmateman on the wall opposite them, listening in. Johnny I think was his name. Or Karl.

“In all likelihood he won’t show up but keep looking. He’s probably on to me knowing I’m on to him.”

“Yes Ms. Halsey,” they said in unison while peering out but now not expecting anything to appear. 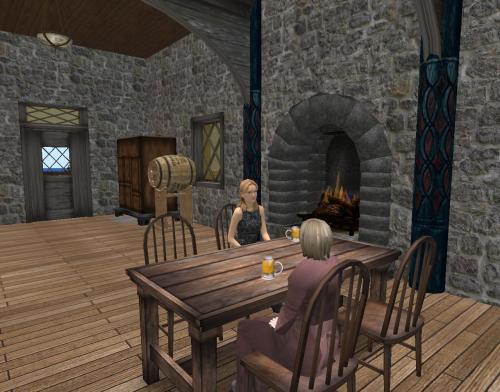 “I’m glad you came to meet me Saffie. I want to know *all* about what Marty said to you, what hollow promises he made. Because I’m here to warn you away from him. He’s bad news. He’s involved with those nasty Illuminati fellows!”

“Girls,” Saffie said softly across from her.

Saffie took another sip of beer. “We also… have girls.”

Linda rushes back to the entrance gate, drunk on malt (again). “Shoot him dead,” she commanded to the shipmatemen. “Don’t even wait for the whites.” 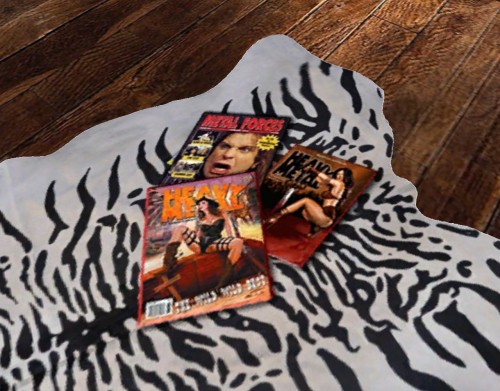 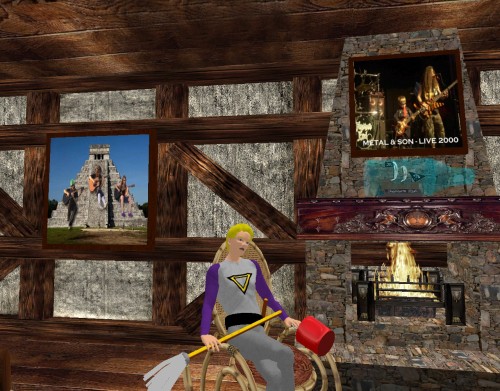 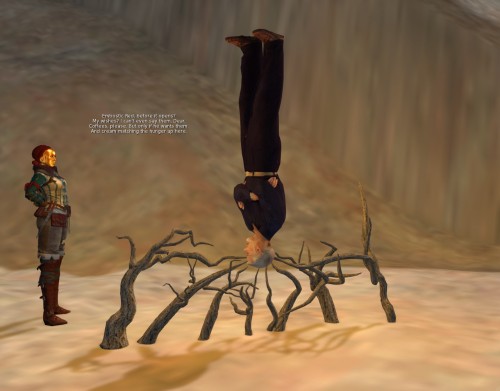 Dadada Again (!). And I can buy for nothing. Yes, Herbert Gold must stay in this West End for a spell. Try to reconcile with the present wife but, if not, there’s always red. Redshirt red, redhair red. Something red. 4th. 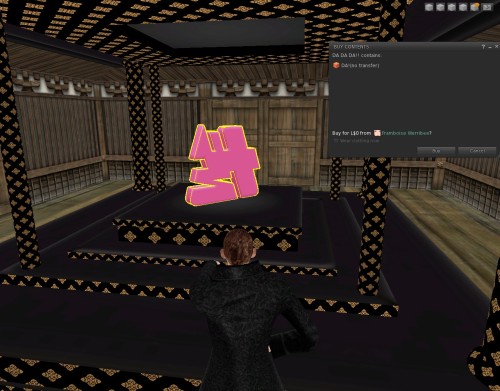 How exciting! West End still has magic, probably due to the lingering effects of WES. From beyond the grave.

“Don’t you think WES could be Joplin, Hucka D.?”

Rentals? ponders Herbert Gold, spotting the sign while heading back from the road’s terminus. Sounds intriguing. Maybe April Mae will like it better here than that box in Dewey. 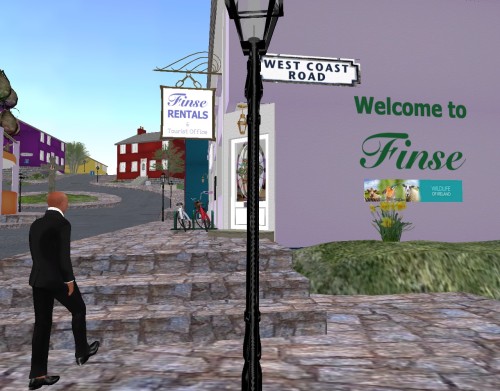 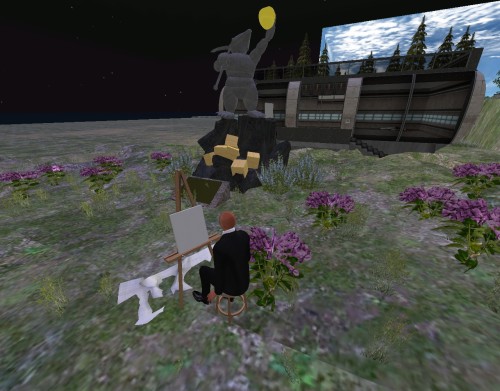 Herbert Gold sat at the terminus of West End Road just before dawn and started his first painting ever, simply entitled “Gold”. Afterwards he gets the strong sense of being boxed in again and realizes he has to end it with April Mae. Wife #4 on the way. He has an inclination to go with a redhead this time. Younger. Red. We’ll see what happens. 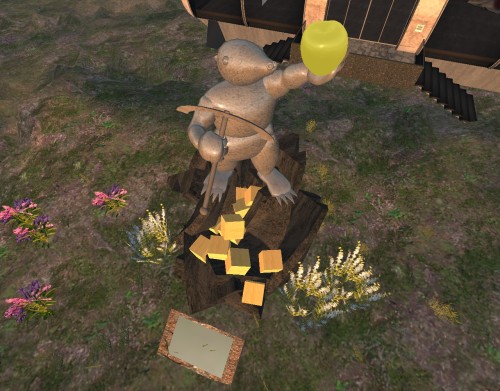 This statue commemorates the discovery of sculpted prims in ’06. Found in the prim mines of Heterocera, sculpted prims were immediately recognized as a new category of prim that would change the face of Second Life forever. This statue is dedicated to the brave Moles who delved into the pixelated crust of Heterocera Atoll in order to bring forth these valuable prims.

He had to get it over with. It should have been done yesterday. Danny had to come to Dewey to live. For good. That’s why the names are in his county.

Just right over there. 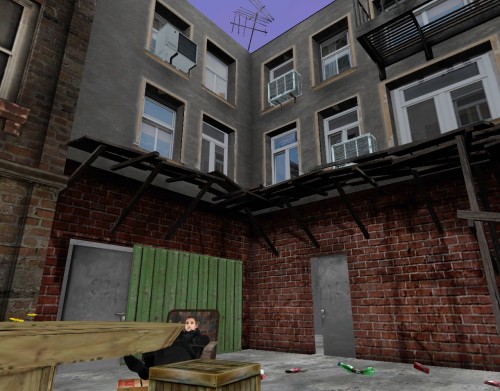 Better, hrmph, hop to it. 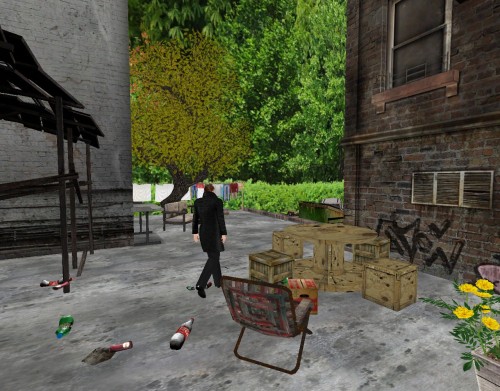 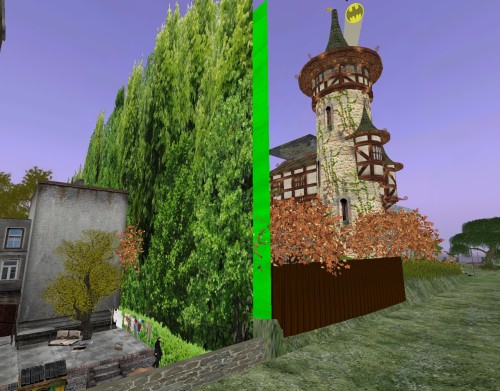 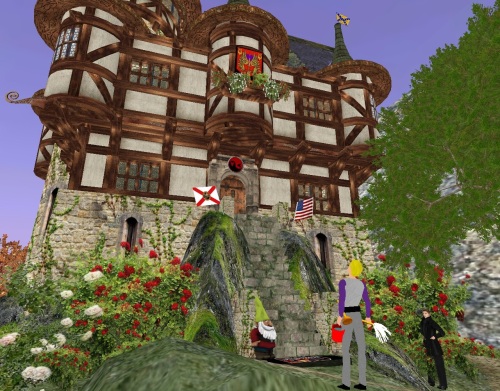 “Jim K., please,” The Man About Time requested about his name. “Call me Jim.”

“Well, whatever, this is a wonderful gift. Thank you!”

“And, as you can see, we’ve copied both your American and Florida flag from the trailer to here. Much more room. And Greyhound Imperial Town is right next door. Hear they have a nice art museum you can clean up. I know you like art.” Not quite enough to save your Fal Mouth Moon job, though, The Man About Time thinks to himself here. Tronesisia’s orders: Danny had to go. The Humanvillians had jumped off the confines of 2-dimensional art and come alive. Herbert and April Mae Humanvillian, ugh. Denizens directly from Mammoth Cave (Kentucky Town) to an art gallery near you. They’ll be in for a while. Hope they like their new neighbor.

“This is *ridiculously* small,” complained a totally pissed off April Mae to her husband. “This door won’t even *fully shut*.” 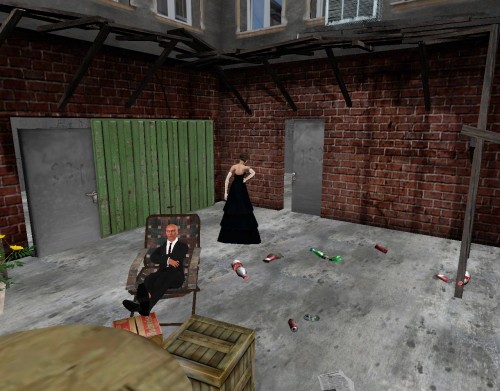 But Herbert Gold was strangely taking all the upheaval quite calmly. Time for a change, he thought but didn’t speak aloud. I’m tired of servants and groundskeepers. We’ll be better off here. He was beginning to dwell on his exes again. And a new one possibly coming up soon.

Oh, and he didn’t die. Tronesisia brought him back to life. Guess that cheers him up a bit too.

And that’s how the Humanvillians came to Dewey. Soon they would explore the whole West End peninsula, all the way to Sentinel at its coastal terminus. Much more interesting in the days when megaburg WES was around, the musical birthplace of the band Love The Three and its Marty, Lemon and George Harris’ Son. Destined they were for great, star studded things, once Ingor was added. 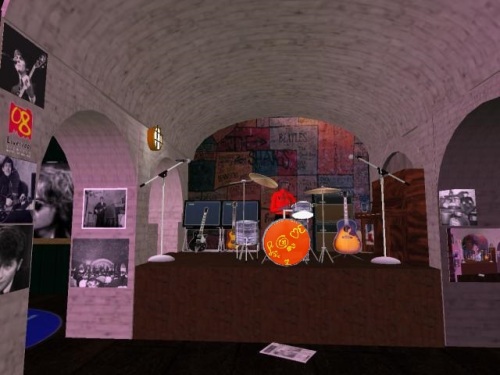 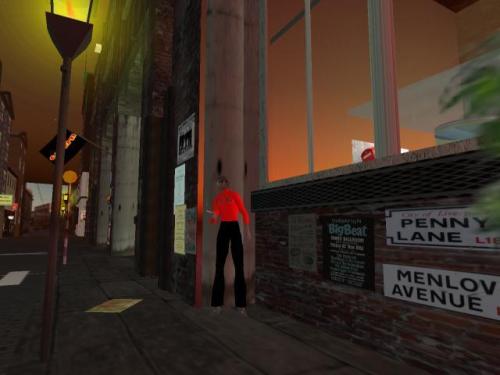 Now where *are* they?

“Ahh, I found it. The place Roger Pine Ridge was born. Dewey.” 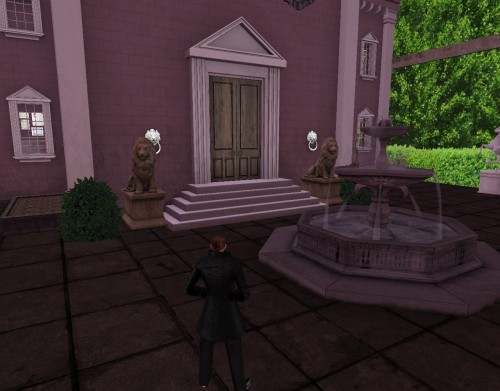 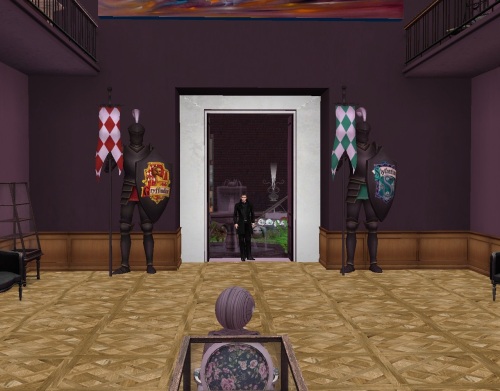 “In the nuts and bolts!”

“You are leaning slightly more toward fame than obscurity but (the margin) is acceptable. Your *doppleganger* is balancing you by leaning toward the opposite. You may approach.”

The sweating Man About Time moved forward then bowed. 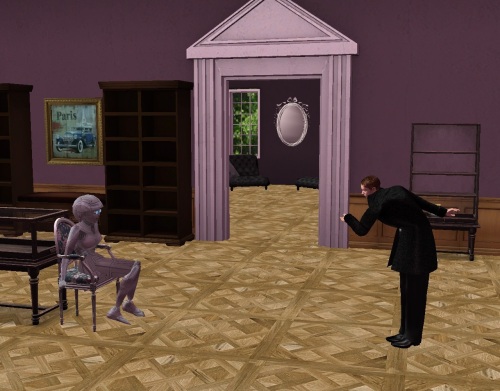 “Let’s brighten the place up a little bit first…”

“We should have given it back,” Herbert Gold reinforced to his wife. “The object was obviously set on the wrong permissions. I *told* you at the time.” 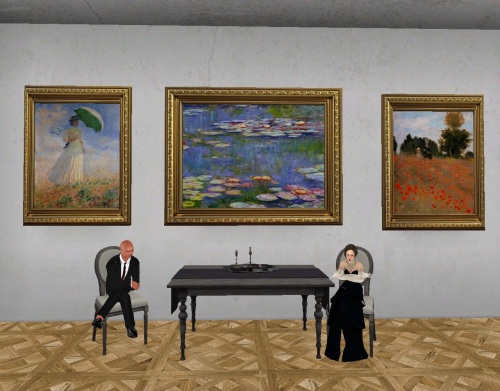 “I just thought it was… *fate*(!),” April Mae tried to defend about the stolen art.

“Like the rare atlas that you could have stolen from that library because it was already checked out to someone else, hmph.”

“Y-yes.(!)” She couldn’t pass up another opportunity.

“This is like you and Madame Silver, Herbert Gold,” Tronesisia spoke behind him, referring to one of his exes. “But you had the decency to move beyond her. Question, though: is she silver, or actually — perhaps — *tin*?” 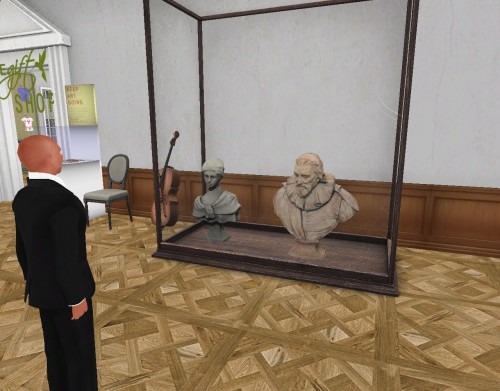 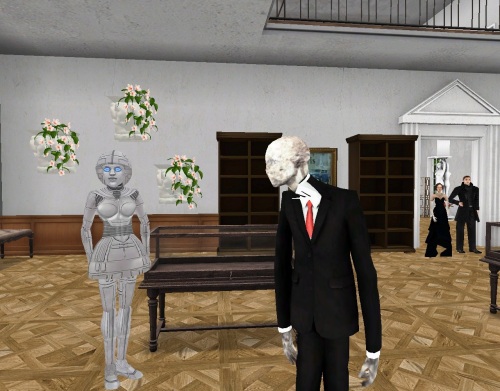