He came down in a beam of white light from the sky.

Mr. Bean, but not that one. That’s just a stand-in, basically a cardboard cutout of a 3D person. 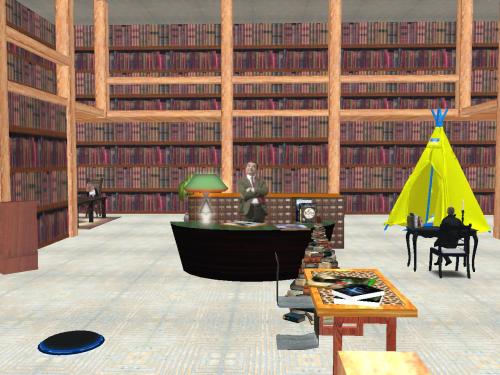 The real one had blue eyes. At birth. Now…

But who’s that over there sitting at the visiting scholars table?

The dead man in the teepee-tent doesn’t bother me any more.

I pick up my blue feather pen again and begin to write.

I know it was you in the woods today, sending me a message. Thank you. With the rolling orange mushroom head you were telling me about the path and the correct way to go through your precious ferns (kind of). You are protective! Very.

I will attempt to construct a Circle of Peace at Aloha. I know now that you would want that (yes). Guide me in choosing the rocks I need.

I have been welcomed by neighbors on Rooster’s Peninsula more than I could have hoped for. I have a new home. 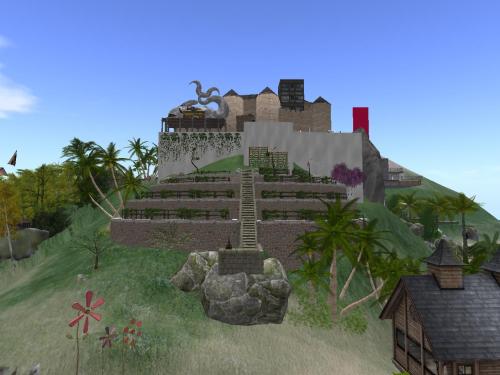 Many more stories to tell here, but perhaps not in this current photo-novel, 33 of a set.

Except maybe the library, the center of it all for me. Use to be anyway. Frozen center now. Controlled by MOA down in the basement. Let’s take a look through head librarian Miss Ouri who comes to us by way of Illinois-Kentucky. Characters are compacting; memories condensing. Soon 6 will be the same as 9 and visa versa. Compacting, compacting. Where’s 7 and 8 (and so forth)?

I told my similarly castle dwelling neighbor to the south that there used to be a 3rd castle in the area, largest of all and most unique. Never Sleep it was called, which I’ve translated into my own peculiar Our Second Lyfe mythology as Roost Never Sleeps, a corruption of Neil Young’s 70s album title “Rust Never Sleeps”. 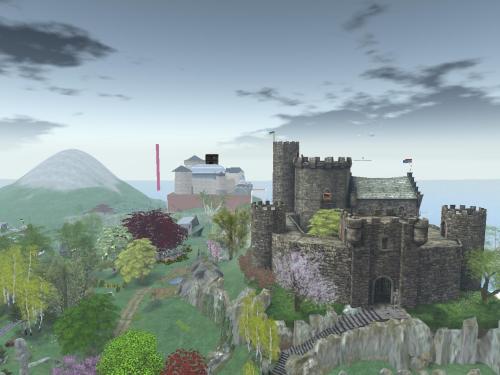 Right over there on that leftmost, now barren beige peak it was, highest of the peninsula. Dominance in former days. The legend lives on.

And now me in the middle of it all. Back to the library…

“If you just *become* Greenleaf for a while — shedding your wings when needed — then maybe we can figure out this whole Ebony-Ivory confusion. I recall the salt and pepper shakers at Starbucanneers.”

“I’m going to stop you there, Baker Bloch,” says Wheeler from her opposite side of The Table. “I have to go see how our Miss Ouri is doing.”

“Oh okay,” he complied, knowing how important all that was (as well).

She moves just across the green.

“Shush babydoll,” he whispers, also placing his finger over his lips. “Daddy’s trying to read.” He returns to such. Almost got it now. MOA is…

She’s heard enough for now through the coke machine. Kactus too. MOA… right down the stairs beside her in the basement of this very building. The key to rebuilding the town itself. Files inside, he said. More buildings. Many more.

Locked away until the right time to spring forward again. Maybe next spring, then.

Unless she destroys it first.

Earlier I had posed on green.

“You saw me today, Baker Bloch. No mistake.”

Baker looked across the table at Wheeler, whose face then changed. “Am Iiiii nothiinngggg?”

This was in a collage called “Moon Landing”, of course deleted now from virtual reality since Collagesity is gone. 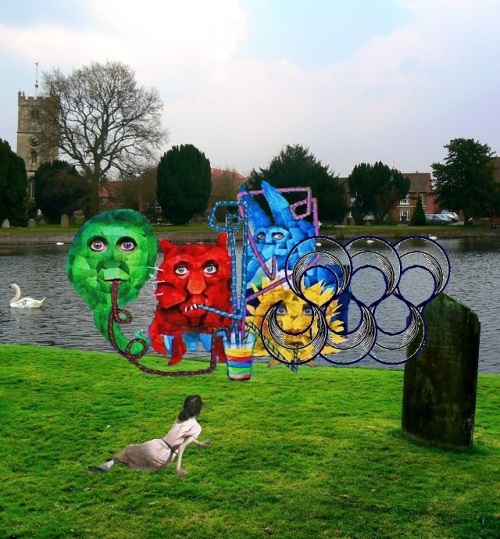 And then in a nearby collage of the former Power Tower gallery called “Victory”. 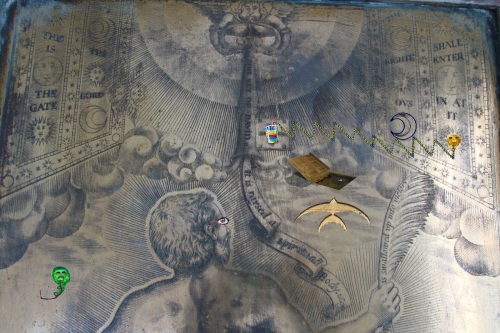 And, in fact, another one from the same series (Lis), facing backwards this time (“Cereal Characters”). 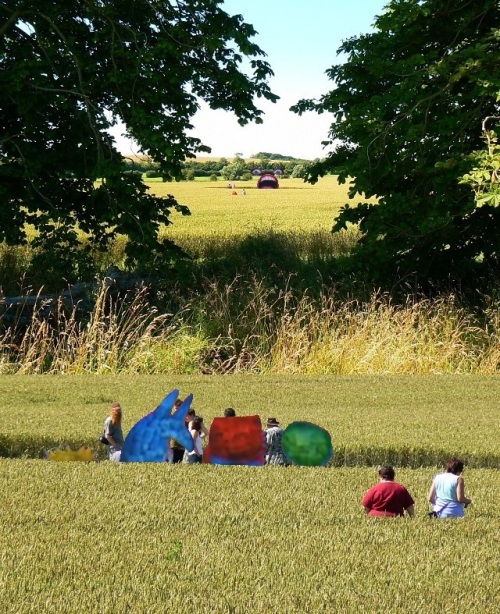 Wheeler, herself now facing the other way, changed back. “Just so you’ll know I’m around,” she explained the transformation. “Now (slow turn). About that hissing…”

Arthur Kill teleported over to Monty and the former location of his new-ish girlfriend Tessa’s motel, now abandoned or “razed” as she lastly put it. Thus the need for her castle, she said, more lies but twisted ones with knots of truth along the way. No indication of the previous owner’s name he was looking for in the land description, pheh. He decides he needs to kill someone later today to let off steam from this failure, perhaps that butcher over in nearby Bouncer who chose to bed down with a prostitute for a wife. Fits his (new-ish) code, Blue Rose style.

But then, below him in a corner of the parcel: a *blue ball*. Success? Will the former owner’s true name be revealed through this trace left behind.

When he flies down to its seeming location in the corner of the abandoned land he was investigating: nothing, though. Then he sees it again, one parcel over and considerably tinier. Impossibility!

That’s when he realized it was attached to *him*. “Radar,” he cussed, which is the same thing both backwards and forwards. Doesn’t matter where he goes, there he is. DELETE Not any more. But who had been tracking him in the meantime? Tessa? Butcher? Prostitute/wife even? Better get back to hq (castle) and make his report. Funny that the object was also owned by someone named simply “castle” according to the description. Probably a connection, then, he thought. But he didn’t want to follow that lead too far, didn’t want to color his report until he could catchup with the proceedings. He also decides to temporarily delete the blue rose in his lapel just in case. He can always retrieve it from his inventory later. Nope, he then thinks. Better delete it from there as well. I’ll ask [delete name] for another one. Good ol’ [delete name], he thinks, originator of the [delete name] team that investigates [delete actions]. He’s been meaning to [delete action] him as well. This will give him the chance — two birds with one stone, ha — after he gets the object he wants. Not *needs*: *wants*.”

Table Room (cutting down to size)

“What’s ya doing?” Baker Bloch walking in. Wheeler thought he was out exploring Nautilus this afternoon per usual. No: staying home instead; hanging out in another tower of the castle, unseen until now. “Rain,” he rationalized to Wheeler after catching her by surprise. Pixy! He makes a note to check that out later. “In the forecast all day,” he says without sitting. Better to stand at this awkward moment for a quicker escape.

“And the rumblings, yeah,” she said, also seeing the occasional lightning in the air and trying to keep confidence in her voice. A rare off day for Our Second Lyfe. She shouldn’t have taken the risk. Now she has to explain.

“Sooo. Who’s this again? Pixley was it (internal snicker)?”

A *rival*, he pondered later, returning to his tower-for-the-day. Something to do with Greenleaf, she said. The rock village. Pretty eyes, though. And I guess the rest was built around that. Nice something else as well. Said she came from a magical place called Pettry Bottom, not far from Red Dragon that is the same as Blue Pennant in the past. Must have something to do with Helen, then. And 3.16, she said. The *others* are gaining power. What *others*?

“I took her over to smaller Hooterville out of the big city glare and then beat the pulp out of her,” she also excused herself, buying into my joke and eating an orange. Hmmm.

In retrospect I think of Baker Blinker and what happened to her via Karoz, history sort of repeating itself.

Wheeler remains a force to be reckoned with. “Pixley” knows that now. Might as well pit a top-of-her-game Tina Louise against a wannabe Mary Anne Summers. Relevant.

“I rest my fingers lightly against the bird house while peering inside. 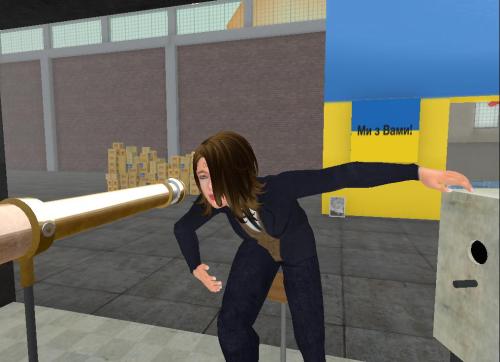 “A red appears, with blue and yellow in background.

“Earlier I had posed on green. 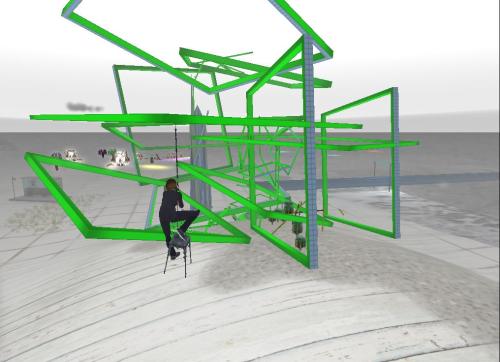 “And that’s my report for today, Baker Bloch. Can I go now? Borneo awaits.”

the problem with toys (whiches)

“Let’s split this crazytown,” said Red to his cousin Grassy as they crossed the tracks and drove away from the scene…

… at the same time they just arrived. 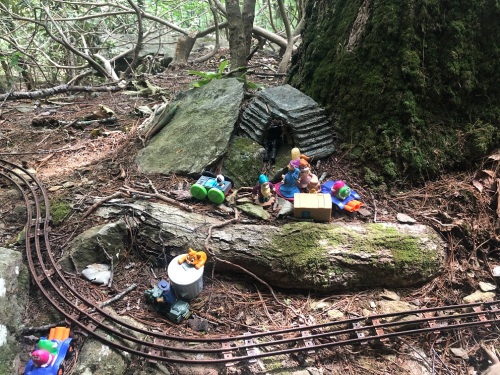 “Whatup guys?” the amalgamation of figures in the center said in greeting, not knowing the difference.

“No I’m not putting up with that,” she doubled down, remembering the spectacle from the future.

“(The situation will) clear up; get better,” countered Baker. “First try.” After a pause: “We could simply *ask* Grassy about it.”

Wheeler was thinking the same thing. Red was about to change over to green.

“Aloha!” he said, garish Hawaiian shorts thankfully hidden by the table. He immediately starts staring at the book, the hand.

“Welcome back Grassy,” relented Wheeler. She looks over at Baker. She knew she would be called Flip at these meetings from now on as compensation. Or win a wrestling trip to fabled Muff-Birmingham in the far corners of space, whichever door she so chooses. She opens the door of the refrigerator to see which one.

“Coke, Grassy?” she called over while grabbing, but Grassy was no longer there. Sprite instead. 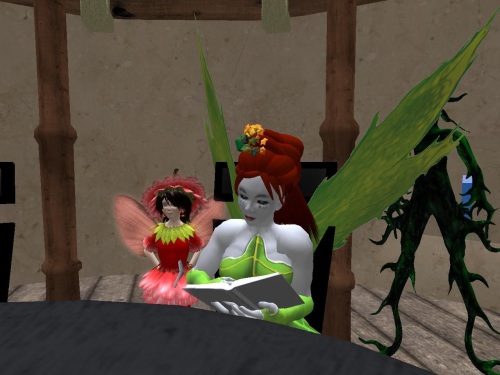 Several of them, in fact. “Here we are!” said the seeming leader of the three.

“Two toy avatars, one advanced — novel 8 — beyond his origins to become truly human and all the advantages and disadvantages involved. The other remained a base, a root. No evolution, for good or bad. This is of course our Grassy.”

“Who I’ve banned from The Table.” She looks around, sees Newt beside her, observes Baker Bloch across from her. “I love Grassy like a green son…”

“But the blue moved on, *up* to me. My height and beyond. Grassy is so small, especially if you take away his outer, delicious, candy coated shell.”

“He has Hawaiian shorts. Embarrassing, actually.”

“He’s so sweet (though).” Baker makes a pouty face. “Reconsider?”

Wheeler reaches back into her own refrigerator to match Baker Bloch’s for more ice for her drink — a Russian Roulette I believe, courtesy of the ever inventive Marty, way back in ’65 for this one I recollect, along with an embryonic version of “Back in the USSR,” which had just been playing actually. Maybe prompted Wheeler to make the drink in the first place — most likely did as I think of it. I’m catching up (with red).

“Are you about finished, Wheeler? We really need to get back to the castle.”

“You know what the Silver Surfer represents? Don’t you?”

“Blue Mountain. No Ashville,” she replies. “I could see it in his eye.”

“We’ll have to take it into the woods, give it a home there. Tomorrow perhaps. One Strange Rock.”

“And Linesboro (!). Like I’m on. Wonderful. Half legal half illegal; black and white. Much more to ponder there.”

“The monkey is naked but is it okay or is it not okay?”