Very important note: All the pictures below were taken the night *before* I learned about the Woodrow Wilson Toy King. Keep that in mind. What we have unfolding in these pictures, as I determined at the time of their snapping, is a basic split between those who wish to head to Ashville to create a new toy avatar center, and those that wish to stay behind in Blue Mountain and keep developing the homestead area. It was perhaps inevitable that a fight broke out between the more aggressive in each camp, namely the Silver Surfer (Blue Mtn. camp) and Leany Golden Guy (Ashville camp). Sometimes leader Lazy Sideburns Man looks on from his clam shell throne, protesting the fight but, as usual, not stepping in directly. Lazy old man. Silver Surfer’s more intelligent and calm cousin Big Head Silver Boardless Surfer (we just call him Bob, usually) attempts to grab the leaning leg of LGG, understanding that a tussle will do their side no ultimate good. Grinny/scowly watch certainly seems agitated at the events as well. Of course he is unable to directly intervene, being only a “head”,  period, with no limbs or torso. I’m not even sure which camp he’s chosen to follow. I believe Lazy Sideburns Man decides to stay with the Blue Mtn. group simply because he is too lazy to travel to Ashville for new adventures. There’s a chance his *twin* might go, if we can find another one of his kind. I’ll have to check asap.

Homer Simpson looks on with excitement, always enjoying a good scuffle. He’s sided with the Blue Mtn. group, for similar reasons as those of Lazy Sideburns Man. Space Monkee in front of Homer here also goes with his new boss (same as the old boss). He can manipulate LSM to do his bidding and enjoys the power and doesn’t want to sacrifice that. And to be honest he thinks Blue Mtn. is a better long term choice for a center.

The rest of the Blue Mtn. group. Now, very important here, take note of that *cyan colored horse*. We’ll return to that in the next blog post. 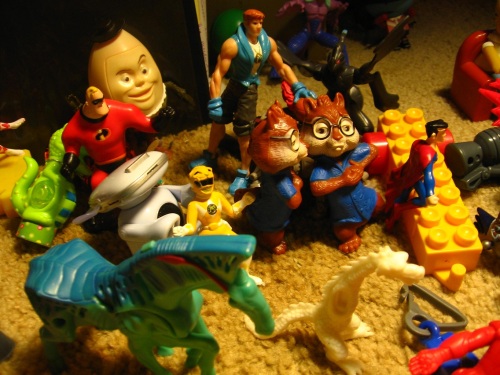 Now the rest of the Ashville group. Yes, I put them in a pack and took them to Ashville, and, yes, the pack made it all the way to at least the edge of Dead Center Hill. But I didn’t take them up the hill. When I returned from the top (see following posts) a blacksnake had positioned itself on a tree in front of my pack, seeming to point directly to it if my memory serves. Was it sent to *eat* the renegade toys, as some kind of punishment? Or was it there just to *point out* it knew (and, in resonance, the *hill* knew) about their coming and potential threat? Threat? Treat? Trick?

Leany Golden Guy II perches on a compass. Jacks look on (red and yellow, like Jack’s VW in The Shining book and movie respectively). The Shining is certainly a good Halloween movie. Cpt. America attempts to cooperate with darker forces on his squad. Baboon Boy holds an empty promise of success between his arms. Other members of the group have their own problems to deal with. The agitation within was just too great for success. The hill would remain toyless for now. But the chairs were already set up; Lazy Sideburns Man would ironically feel right at home on the top.

One response to “Toy Avatar Split”