Shelley Struthers testing out the redwoods near Somoco where we saw Wheeler Wilson and Baker Bloch earlier. She likes! Not Leni and the full pack of dances, but swell enough. Thumbs up, she gives us the reader while continuing, head screwed back on tightly as hell. 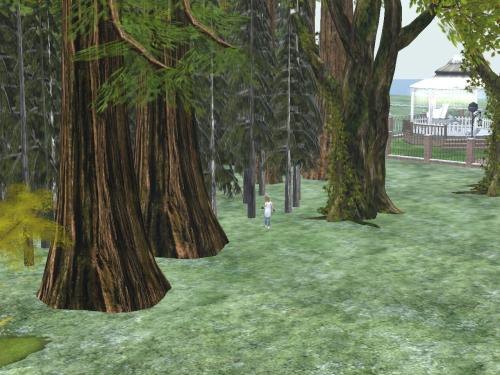 Passing by on his way out of the Red Room and spotting it, he couldn’t help but ask — nay, *had* to ask, as he contemplated just a bit further. “Nurse Zombie,” he said, still staring at her carved up back from his angle. “Your year of death — I assume the date on your back is that.”

She nods her wobbling zombie nod, currently with only one responsibility to the ward: guard its newest and costliest machine, make sure no one messes with it until the experienced surgeon that can actually work the thing arrives from Beckman’s Folly day after tomorrow’s tomorrow.

“Is it suppose to be 2012, and, if so, what is the slash at the end?” he continues. “Or is it perhaps 2021, with the slash in the middle? I’m curious because of a conundrum I’m currently facing concerning those very years. And that very event, by which I mean: death.” The solution to his issue, he knew, could reside in this one. It seemed too synchy a confluence. “Can you help me?” 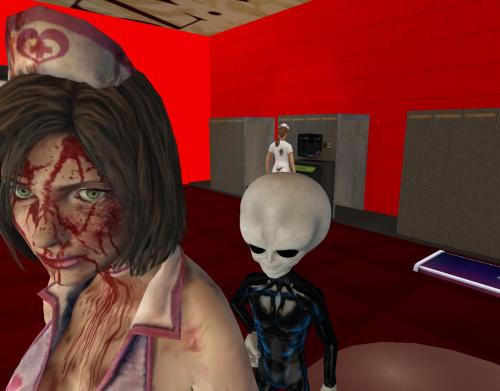 She couldn’t face away from the expensive machine she guarded with her dear dead life so she spoke with her back turned still. “One person,” she gurgled. “Knows.”

“Who??” No answer. The damaged back loomed large. The answer was already there. 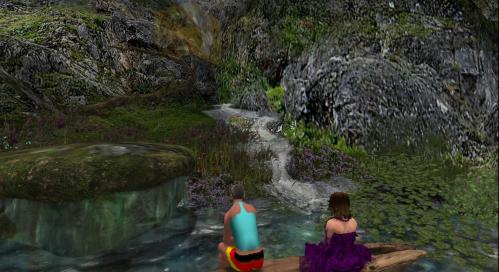 “I’m starting to like the classical view of Our Second Lyfe more than any other, like this standard midday environment here, Wheeler. I’m starting to think the original Lindens had it right at the beginning. Linden trees — never surpassed. Classic avatars…”

“Like me,” Wheeler jumped in. She smiled toward Newt, her husband past present future, if not her current boyfriend who was another. She was many things in one. Just like Newt, I mean, Baker. But not her boyfriend. A figurehead. A prime minster for a queen, king hidden away in the shadows still.

“Liz knows,” says Baker/Newt. “Shelley didn’t tell her but she knows. She’s older in a future kind of way.”

“Strange way to think of it (!),” replied self playing Wheeler. She was not as shape shifty as Newt/Baker, but superior in other directions. They were complements.

Pause as they took in the pretty environment below the revived Roost Castle. They’d followed Liz and Shelley there, since they were them.

“You know what Shelley said today — just a moment ago, actually.”

“That you were beautiful?”

“Yes.” She looked over at Newt expectantly. Would he say the same? Her legs were too long still, she felt. He didn’t think of them that way any more and said so. She needed reinforcement. The scars on her face from that steam accident were healing but still showed up in the mirror when she stared at it first thing in the morning.

But he was not her boyfriend. “You better get ready to play the role of grown-up Shelley. Coming up soon, you know, maybe this photo-novel, maybe postponed to the next. But she owns the castle. You is her,” he finalized.

We have a mystery in the middle which is the end.

I asked the patient’s mom about the skincare regimen they were using, including their choice of soap. The parent said they were using Ivory soap. She said the previous doctor said to use either Dove or Ivory.

Now that would be an odd thing to suggest. Typically, one might recommend a less drying cleansing product to an atopic, but Ivory wouldn’t normally be at the top of that list. Almost undoubtedly, the doctor said to use “Dove, not Ivory.” But it is quite understandable how a patient could misinterpret what was said.

Port Ivory is a coastal area in the northwestern corner of Staten Island, New York City, New York, United States. It is located on Newark Bay near the entrances the Kill van Kull in the east and Arthur Kill in the west….

The area bore the name of Milliken originally, and became locally known as Port Ivory after Ivory Soap, one of the best-known products from Procter & Gamble, which operated a factory at the site from 1907 until 1991 when the soap making operation was moved to Mexico.[1][2]

“I knew you’d be back. *Boyfriend*.” Mexican standoff.

“You know what I’m here for.” SHOOT SHOOT POP POP.

Red at the waist.

She’s been here already, he realized, looking at the last visitor picture. Offering an apple — offering *me* an apple obviously. Will you rent again from us, will you be *tempted*? L$831 dollars in the bank, just enough to cover rent for the next week. But dare I?

Novel 32 is coming to a close. Premium membership running out tomorrow, and land use fees resetting the day after that.

It’s too easy. No, I will not pay the rent, nor renew the membership. I will get rid of my land through abandonment if needed. Property in the beige highlands of Nautilus — not very valuable at all and will have to sell at a cut rate price to even ditch the burden in the next several weeks, most likely. Time for a purge.

One more thing to check, the clincher?

Still available. The library, the castle, the Nautilus map can move there. Everything else can go away for all I care, even the Temple of TILE, at least templerarily, hehe. No time for jokes here. Action… tomorrow, tonight, right now.

I im Wheeler, richer in money at this point. “Send me a couple of lindens over, say 1500.” Enough to cover 2 weeks in this location on famed Rooster’s Peninsula.

I wait. The curtains close again for now.

“She’s coming mum, sire!” called the gardener through the window, having nothing to do now except be a watchdog since there wasn’t a garden in this new location. Only flat plywood covered with a light snow. 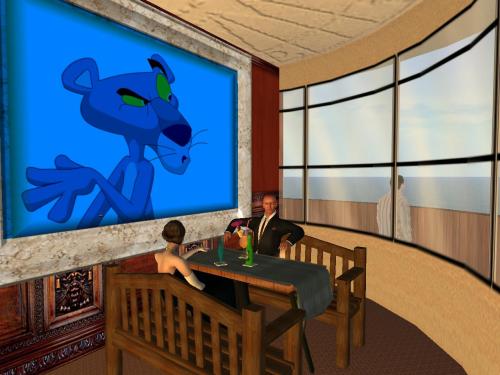 “Do you think she found him?” asked Herbert Gold over to his wife, often his partner in crime. The latest theft: “The Blue Panther” by Horace Go Lightly of Spain’s France, prized for its use of cobalt in a thin veneer.

“Doubtful,” replied April Mae Flowers, out on bail from Collagesity jail and thus able to help her hubby with setting up the new house. She just had to have the “Panther”, bail or no bail. She talked her husband into it. As she always could. A team once more, just like Baker Bloch and Wheeler thanks to Nauty. Googling the safest and most efficient way to commit the crime, they bought a fishing pole and lifted it out of a transparent ceiling. Suc-cess!

“She’s pulling in now, sire, mum. She has something in her boat. She has *someone* in her… boat?” 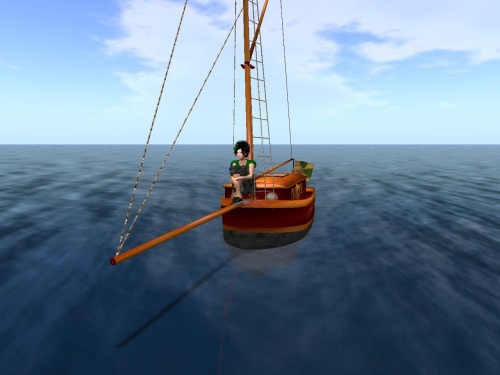 The house never stood a chance. 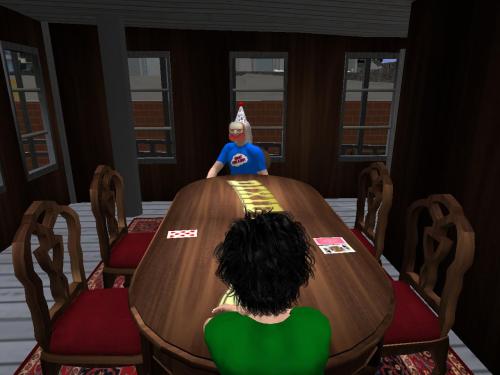 He flickered in but then was quickly replaced by another, a *guardian*. Pot-D representative Duncan Avocado, assigned to the case by Buster Damm a while ago in the photo-novel but then pulled in favor of White Mage. Now he’s back. And beautiful. “Duncan,” she said, not that surprised. “Should have known you were lurking behind the curtains somewhere, ready to have a seat. Whatcha been upto? It’s been, oh *forever*. Since…”

“Dixie, yeah I know,” Duncan Avocado said in her direction, knowing over what part of the table this was going. “I said I was sorry.”

“Mmmm.” Duncan hesitated, understanding this was the key. Jasper turned wrong. like a Newton Jasper Ninja Turtle upended to make a soup bowl.

Where is she/he? she thought from her Waiting Bench.

“And pray tell what kind of doctor Mrs. Powers? Psychiatrist? Podiatrist? Vet, even?”

“Vet, yes a vet,” she decided. She sat back in her chair, fighting the tears. The black coffin beside her was too close. It felt like it was on top of her now, even trying to encompass her.

“Vets aren’t in hospital unless you count the VA. And I don’t think your husband is that kind of vet. He will be dead in a week,” the owner of the funeral home doubled down. “I hate to be so blunt but you must prepare. The black coffin you’re staring at would make a fine vessel for the afterlife, as we sometimes put it. Like a brave warrior sent back to Valhalla. You said your husband was a vet.”

“Yes,” she said absentmindedly, starting to believe this is all a dream. *Must* be a dream.  But how can she wake up?

“Oops, the black has moved a bit left again. Looks like closer to 80 percent now. You better make that purchase today. It’s the only way to end this.”

“How much do you have? Vets make pretty good money as I understand. Even vet’s assistants. You trade off each week I’ve heard. How exactly does that work?”

“How about a 1000?” She thought of her pocketbook in the car and a thousand dollar bill within. “How about 2 to end this, 3.” She recalled she had 3 1000 dollar bills in the car she drove over with, a Toyota Dusty with 200,000 miles due for an engine change. That’s why she had the money in the car, in her purse. She was on her way to the mechanic to pay for a motor so she could keep running from… who? Where did she come from?

“90 now. You better cough up the appropriate money. Do you want your husband to be buried in the ground like a dog?”

“Don’t *start* with dogs.” Her eyes were completely misting over. She decided to scream at the top of her lungs — maybe that would do it — end this.

“Another typical reaction,” came the reply after the deed was done. “Let it out, Mrs. Powers. Let it all out. Let the whole town know how you feel in this moment. Severe severe grief. Let it out!”

Sirens went off down at the sheriff’s station. A firetruck and an ambulance were dispatched from the opposite side of town, the first running over Tim Powers bending down to pick up a Lincoln penny from the road, and the second making sure he was good and smushed and dead. His soul left his body.

“It was a pretty good one tonight,” Jeffrey Phillips exclaimed later to mate/lover Charlene the Punk ’round the breakfast table eating Toasty O’s, a new version instead shaped like little squares and triangles. Still the same delicious oaty taste, though. He spoons a big heapfull into his face between sentences. “The dream I mean,” he says with open, milky mouth, making Charlene wince. She decides to take a long bathroom break while he finishes up. Sitting fully clothed on the toilet biding her time, she thinks about the dream he spoke of and the poor widow-to-be within, having to scream her lungs out to wake up and at the same time losing her husband. The scream equals death itself. A pretty good one, as Jeffrey declared after revealing the details. Worth putting in his blog, even.