She walked right past the baby doll, not even tempted to pick it up for a cuddle. She was more grown up than infantile Jeffrie Phillips in that way. 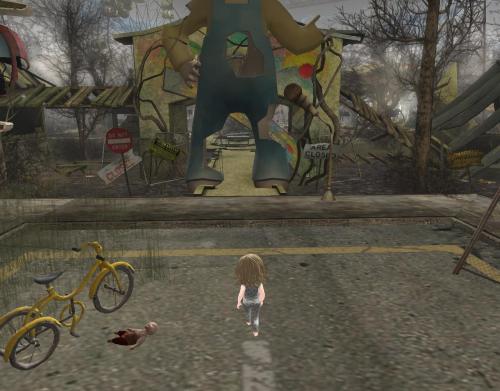 She had to see for herself. The mother! Poor Katy Kidd. Another infant grown up too fast, thus the madness. She walked between the Big Boy legs, which probably wasn’t an error in this case. Just something she had to do to go inside.

She stops to ask a survivor if the beach was still straight ahead. The head nodded without sound. She wondered if this could even be All Orange in another guise. After all, a bloody dress was involved.

It was getting even creepier but Toddles kept moving forward toward the sea, the beach, the… explosion. A stick figure on a bike skirted her to the left without apology… a white doll boy in a tilted chair with slackened mouth also in that direction.  Straight ahead: another survivor. One of the lucky ones that was able to receive a mask.

“Is this the way to the beach? Darn bike!”

Another silent affirmation. She kept walking, rounding the old boathouse to the right to meet up with The Librarian, still perusing that Octopus book from the last photo-novel. The stench was becoming overpowering for the little girl. “Where is she?” Toddles demanded, tired of looking and wanting to get the hell out of this hell. She just had to see for herself. I still don’t think it was an error to enter, but we’ll see. 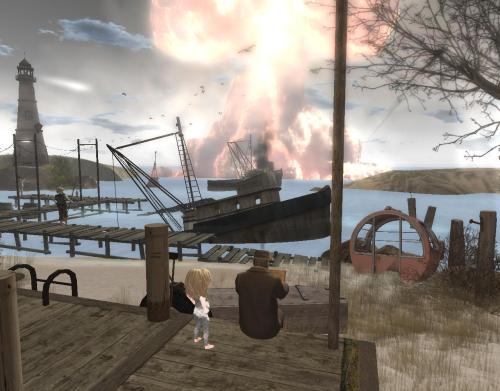 The Librarian didn’t stop reading but tilted his head to the left, indicating that direction. And there she was, face down in the sand. Or Toddles assumed it was her. She inched forward, the awful smell thicker and thicker.

She stopped at the tire. She could get no closer without fear of passing out. But she knew it was her now. 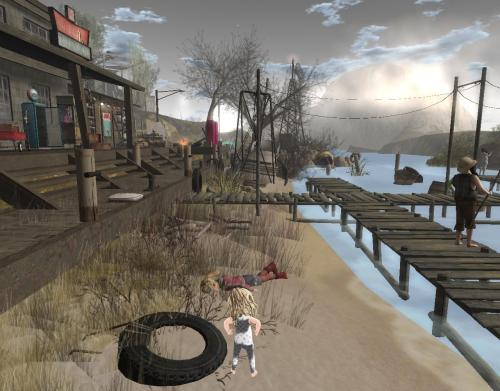 Katy Kidd, a little more grown up than we’ve seen her before. But definitely not reaching adulthood now. Toddles could go to Picturetown with a type of closure.

“It was a little toddler. Just like you Toddles. In fact…”

“Don’t say it,” she requested while having another spurt. We had just finished up the 3rd game of pool after she sank the Homer ball — as we started to call it in game 1 — for the win. I retrieved the yellow sphere from the side pocket and placed it back in the center, along with all the others. Losers have to rack. I kept pondering while I did. Toddles was now about 5′ 10″, so not a toddler. I was wrong in that, a loser once more. 3 feet to start, then a little under 4 1/2 after the second, then this. How much would she grow? I thought back to broken Big Boy at the entrance to the abandoned and clearly haunted park with the baby holding a doll. This tall? I fairly easily made it between the legs, but clearly an error to enter.

“Continue your story,” she requested while bending over to break the triangle (*crack!*). 6 balls sunk right off the bat; odds are stacked way against him to begin. With height comes increased skills, seemingly. I decided to appease her. 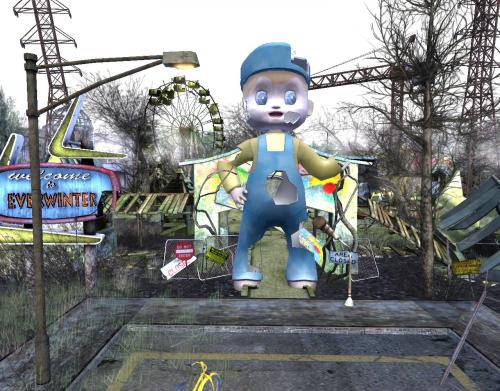 “Kite flying Jimmy Jackson and fly fishing Johnny Jimson were down at the pier, absorbed in their pastimes and trying to ignore the stench of the bodies that had freshly washed up on the shore that morning.”

“‘Ahh, there’s our old friend Reader perusing the octopus book’, I said, peering around the pier more, ‘perhaps looking for a smell spell to end it all.'” 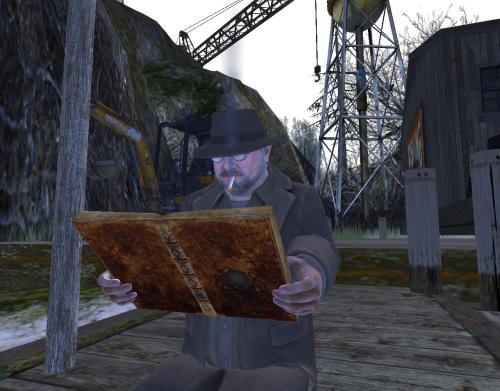 “Octopus? Where’s this going?” she asked. The 7 ball was sunk, then the 2, then the 6. Did she even have any left; had she already won once more? He checked: not the Homer ball this time, but the orange, the 5th. It seemed to smile at him, telling him she was the one, the only. Here was All Orange in the flesh. The pool stick lowered, aimed… 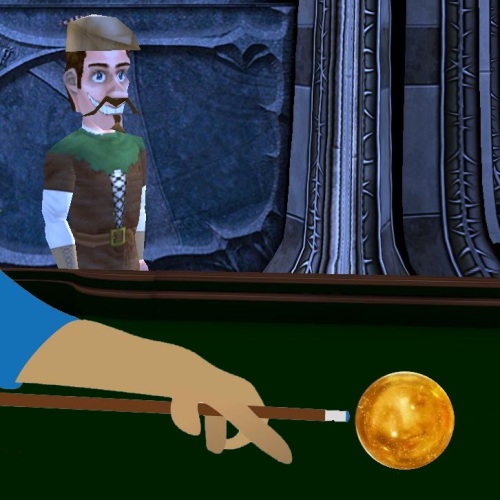