Pirates, pheh. I wonder if I stand here long enough they’ll come back over here and dance for me. 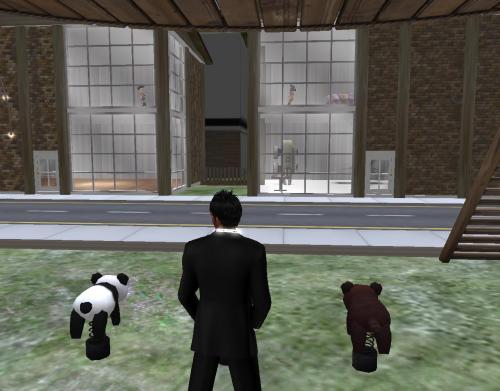 But I haven’t got time for this tonight (he turns). I must find Norm, try to talk to him again about Fairview Alpha, about that 7610 tattooed to his forehead. About… Static. Snow, perhaps, like in a tv screen. That corner… Jeffrey Phillips looks over to the (northeast) corner of the lot and the 2 prominent, red V’s over there. He can barely make them out from this distance.

Better head closer; Norm should be around too — he always is, along with the rest of the regulars.

But most of the bots appeared to be gone tonight from the fake town. Jeffrey Phillips leans against the kissing booth and asked Elsa, the lone remaining one over here perhaps, where the others went and if she was still mad at him for that Tennessee thing he tried to pull the other day (she was).

“Only us ‘E Girls’ remain,” she said after a spell and a pout. 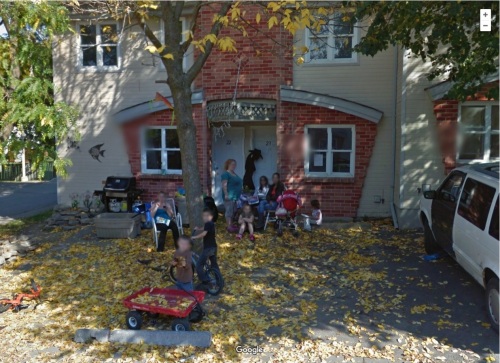 Maybe this blog will turn into Google Earth oddities and veer away from Second Life© stuff. Finding *so much* in Picturetown (alone!). If only Hucka D. could weigh in. 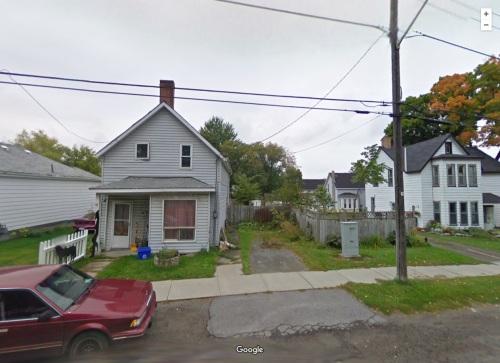 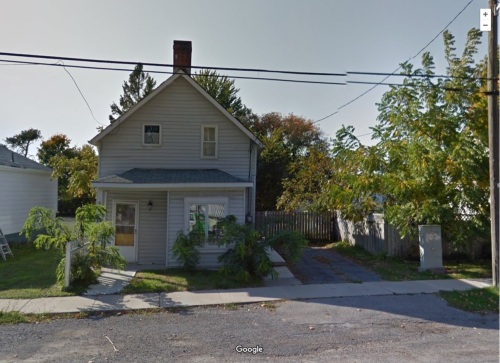 EXACTLY 200 meters between the two, which JUST became a blog tag last night. And in the center? YORK, which eventually turns into MARY. Mary York = Charlene the Punk (= Wheeler = Her Majesty the Bigfoot/Yeti), who just talked to Giant Tiger in Rubi. 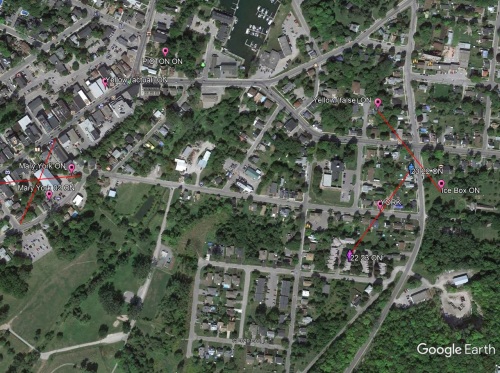 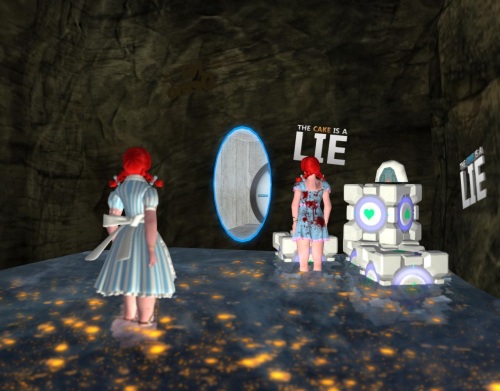 The blue eye is closed on the Moth Man as he stares out at Bottle Mound on Fishers Island. Interesting. Noting. 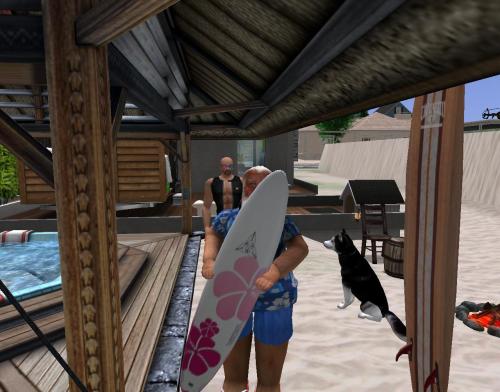 On to Wallytown proper to view the bell shaped rise with the crashed UFO beside it on the beach from a different angle, as it turned out. 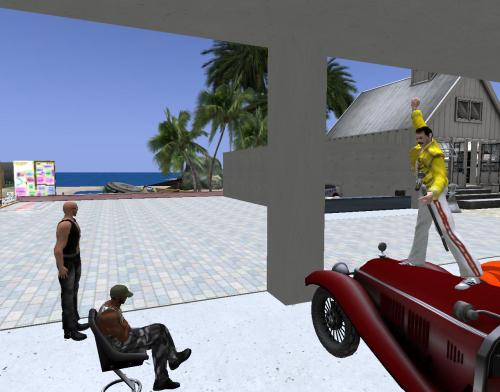 “He won’t get off my car, Mr. Z,” complained Zapppa’s seated brother-cousin Zipppy, a well thought of Wallytown mechanic in its California half. Nevada beyond the wall is a different story, where he’s wanted for at least 3 criminal acts: grand larceny, manslaughter, murder even. “Screams he’s in love with it and wants to speak to someone named Wheeler about buying; thinks he can get a good deal that way. Thanks for coming by and helping me. It’s kind of an antique you know. It’ll cost him X amount of dollars. Could he just be talking about buying the wheels off this jalopy? And since it’s split in two pieces currently to make a novelty couch, we’d have to charge mucho extra to put it back together. Could he be… insane? Mad?”

“I’ll see what I can do,” replied Zapppa, who was indeed Mr. Z but not the one we’ve already met. Better resist call him that from now on. And we’ve already also run across someone with the tag of “Mad”. Best not to use that again as well. Let’s just go with Mercury. Mercury X. Mr. X. Because that’s what they’ll have to charge him. And let’s similarly name Zipppy Mr. Y. Although this is probably a one-off for him in this here photo-novel; we’ll stick with Zipppy, then. And Mercury X. Mercury X. Rising, let’s say, with the X silent. Like the original Star Wars movie from 1898.

They end up just deciding to give the car away for basically free. Madness. All four of ’em: W mixed in with the other three now and turning them all back into letters, shall we put it.

Wheeler (Ms. W) then returned to her well placed friends at the Annapolis MD consignment shop we saw toward the end of photo-novel 20. She had no need for money with besties like that. 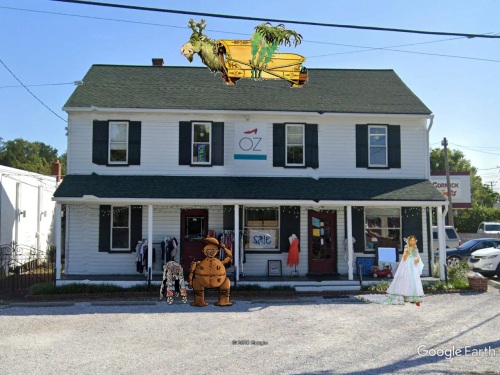 Dorothy inside promptly wrote W a check for X amount of linden dollars to make up for Y and Z’s loss. 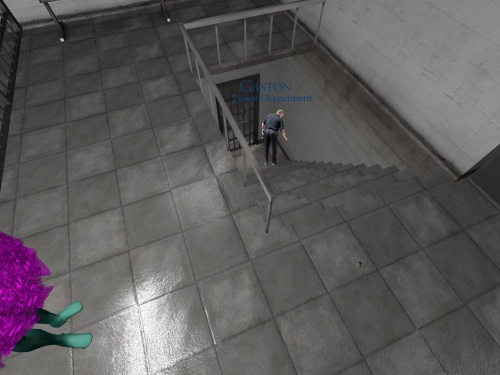 “I remember that day like it was yesterday,” spoke Jiff the former staff psychologist at Gaston Police Station. “Gastion, they sometimes called it when they were all drunk and slury down in the basement beside the torturing devices. Best to be intoxicated down there. Too many ghosts and memories. But it was the only place they could get away from chief Golden Jim and expect to get away with it. Chef Golden Josephine often joined them. Cook at the upgraded Joint Joint, now a hip place for those who think with their hips instead of their head. Which was seemingly everyone around here. The Dark Peak dominated once more — Dark Days again.”

Jim the Bastard Pirate, formerly Randolph the Bastard Pirate, was typing away as Jiff’s cartoon-ish, Ickle voice yammered on. The words almost came too swift. He needed something better than a manual instrument for his craft, his trade. Because, he determined early on, this one will *sell*. I’ll hide all the things I’ve plundered from others, like that graphite gray map on the, let’s see, wall behind me. There. He turns.

Half of it remains screened for now.

Yoko had it backwards (stand on head)

Marty was moving across the street, and, in the process, giving away his former identity as reinforced by the Piera.

Who or what is the Piera? That’s a question to be asking. Next…

We can probably start with the Man About Time, since he seems to have created it. 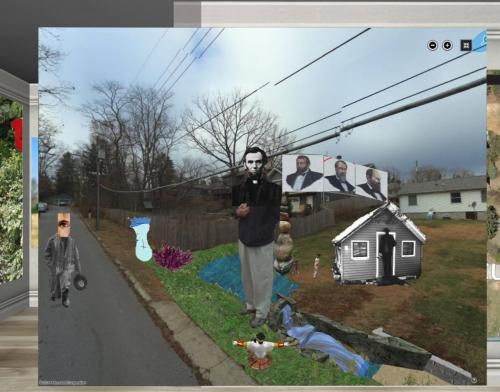 “It’s called ‘Fathers’, Hucka Doobie, a more interesting one from the Embarras series. And I think pertinent to the current story.”

“On one side, Hucka (he points to the right at a figure more in the distance propped up against a house): Homer, a famous father figure from Cartoonworld. And then the other…”

“Anderson,” spoke Hucka Doobie, looking left at another, larger figure walking down the road while stifling a yawn. “What the *heck* are you going to do when the 2 weeks are up? You’ll have to sleep at work!”

“I know you will,” Hucka Doobie said, finished with her joke. “You’ll be fine. The *characters* will be fine. Olive Green Pink. Phyllis Phox will finish her novel she’s already read and everything will be okay in the world again. The Corona-V brewskies will fade into the distance. People will set aside their individual realities to join together as one in churches across our fair (Abraham Lincoln) nation. The red book will also be put away in favor of starless black. No Red Star any more. But that’s Storybrook — which, like you know, you’ll be leaving in 2 weeks. What of the other places you need to go now, to complete the story of the elephant continent? So much more…”

“I know, Hucka Doobie. It’s as though I’ve barely scratched the surface.”

“You know the danger.”

“Yes, Hucka. I suppose I do.” He turns toward the collage again and away from his closest friend in virtual reality now. “So about ‘Fathers’…” 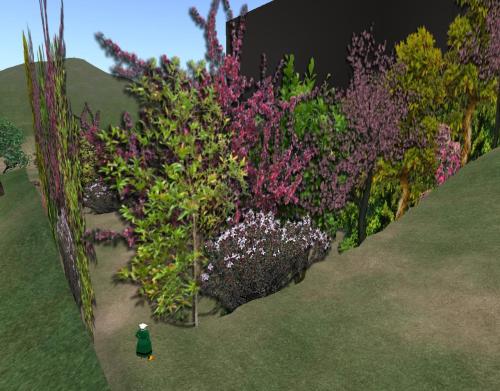 “Hmph. Hidi’s got a privacy screen surrounding her property now. And ban lines. Can’t get in. Doesn’t reply to im’s.” Mary Peppins scratches her chin, then continues to speak to herself while looking eastward. “Guess we’ll have to put up with that eyesore over there a little longer. 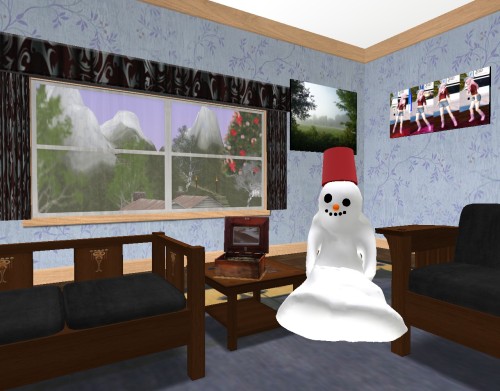 He loved listening to Bing’s Song on the music box. But “White Christmas” was over in Eot and he was melting. He’d have to go back to Kowloon to keep perpetually frosty. He didn’t understand quite why, except that he was *made* there, much like Guy Benjamin’s Grandmama and Grandpapa. He must get lost inside the maze, only to be found when the Heart Queen good and well wanted him to for her traitorous ways. Because she was back at it (some things never change). He could room with Satan Santa again. Safe bet that he’s not living with anyone still, being there’s a Hell Portal right smack in the middle of the kitchen ceiling.

He likes to use it to warm his tush while he’s cleaning the counter. 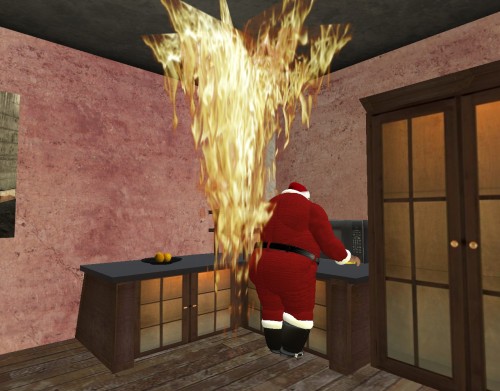 “Sure you can stay with me again, Frosty.” He points to the corner furthest away from the kitchen. “Park your half melted carcass right over there behind the bathtub.” 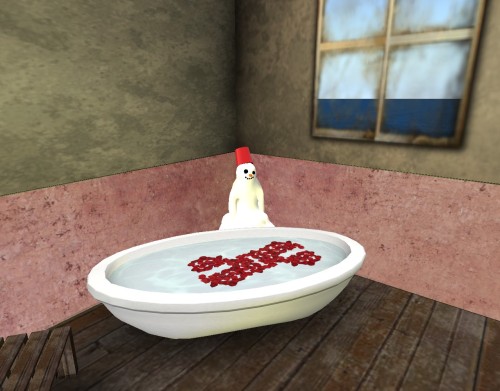 “Oh man,” he thought to himself. Stuck in this spot the rest of the winter. Unless the Heart Queen needs me. Sounds pretty good right now.

“Pass the soap, wouldn’t you Frosty?” 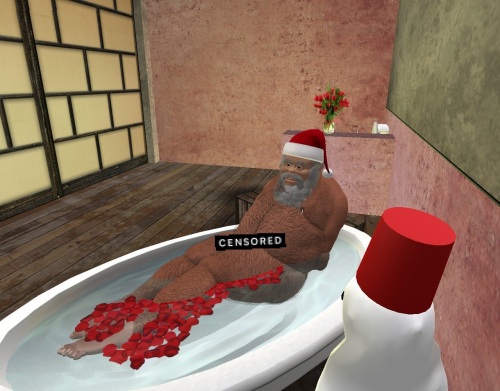 A new skyscraper has come to 7 Stones. More details soon. 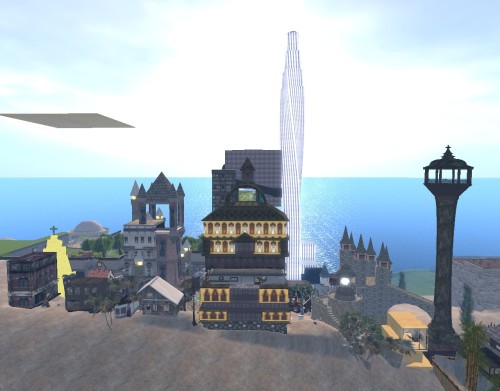 Hand in hand with this addition, the townspeople have decided to keep the cubic form of baker b.’s “Art 10×10” of 100 collages, locally known as the Edwardston Station Gallery. Mr. Babyface originally huffs at the retention to anyone within earshot, but is then partially pacified when he realizes he can see the distant Whirlygig Temple from his apartment window by extending his sight range a little beyond the norm, as he did the day of the discovery while trying to spot the top of the new skyscraper mentioned above. Mr. Babyface even contemplates attending services at the temple, if any regular ones are to be found. He’s now a pious fellow, originally praying to God to help him cope with breast tenderness while in his early 40s.

And speaking of temples, there’s also a new one in Collagesity itself;  Mr. Babyface may have a range of religious options to choose from all of a sudden. I am pleased as punch to announce the return of Karoz Blogger’s Temple of TILE, which I suppose means Karoz himself will return to 7 Stones, along with wife Baker Blinker of course. This was a surreptitious decision because Karoz was just about to splurge on a larger parcel over in Chilbo to set the temple up when townspeople voted to retain the ESG. “Come back to 7 Stones,” then urged town leader Baker Bloch to his old friend. “Free of charge; you’ll have all town resources at your disposal.” And so it seems it will be.

The price for all these additions? The groundside galleries holding the “Art 10×10”, namely Gallery Jack,  House Greenup, and SoSo. But, as explained a bit in this earlier post, all of the 100 collages displayed within these structures are still in the Edwardston Station Gallery skybox, so no real subtraction for the village. And now… well, let’s wait to describe some new art coming to town until later. A bridge-maker between old and new. Important!

The Man About Time also pondering religions in his Kidd Tower apartment.