“So tell me about this place, Baker B.,” requested Hucka D.

“I don’t know,” I replied through Baker Bloch. “The Moon. Er, over there’s the Wild (White) Whale used to audition new avatars. And then back there is the White Whale Restaurant or Lounge or something where the winners gather afterwards, the avatars who are eligible for new parts.”

“Hmm. I see. Why not just audition them the regular way, say, to test their acting skills?” It was a logical question.

“In my estimation, accing is 99% perspiration, so they need stamina above all else. The Wild Whale tests this. Garfield, I mean, Hatfield failed, for example. 3.3 seconds out of 10, even on two tries. We give everyone a second chance. But it was 3.0 seconds the first time, and only a slight improvement for the second ride.”

“Colored TV — he won out over Black and White.”

“And Kate McCoy — she’s the real McCoy since she’s all grown up. Still listening to the patterns in her headphones, a trait carried over from childhood when she was just little Katy Kidd.”

“Is she married?” Hucka D. offered.

“Uncertain. But we have a location for her to employ her accing skills at. A house filled with dots.”

“One we call just Chicken-Man now. Then, um, Dark or Black Elvis — Elvis Black I suppose. Then Kind of Messed Up Cat. The idea is that Kate McCoy will team up with this new cat now that Garfield — *Hat*field — is out of the picture.”

“Oh,” deflected Baker Bloch — or me through Baker Bloch. “I want to show you something before I forget. I was scouting out the White Horse Village today for a reason.*

Hucka D. was thinking that she didn’t know he was scouting around White Horse Village today but didn’t say this aloud.

“Let me turn on the map first.” 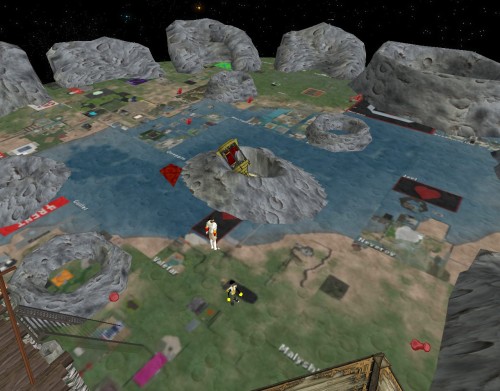 “Nice,” exclaimed Hucka D. “And the pins are from the Blue Feather Sea locations from the previous novel. 14 isn’t it?”

“Well, 15’s already started. *We’re* in it. I have to see at least that one through. And, in truth, I think there’s going to be more after that. Moving Collagesity to the Nautilus continent and renaming it (7 Stones) was a key to continued evolving. That’s we’re we are *now*, of course. This skybox might not have been possible in Collagesity due to more limited prim amounts.”

“I believe they call that land impact amounts these days, Baker B.”

“As you wish.” Hucka D. points upwards. “I know that’s the Earth over there but what is this? Obviously the Blue Feather Sea remade as a cube, or the 6 composite sims folded up as a cube. But is it real? Looks kind of transparent to me.” She keeps peering upward, seeing stars through the predominantly blue cube. A triangle of stars, actually. She’s connecting the dots again.

“That’s what we have to find out next — or soon. Karoz’s ‘E’ found at the bottom now 10 years ago Earth time could be a key. If we could just figure out a way to land inside…”

“How about those stars,” Hucka D. then points out.

* What I through Baker Bloch forgot to show Hucka D. White Horse Village: directly under the White Whale Restaurant now. 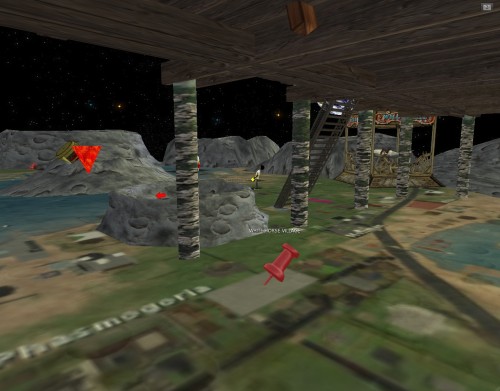 “Come on, Preston Weston. It’s time to go into town.”

“Aww, maww. Do I have to? I always get burrs on me passing through that small forest on the the way, heh.”

“Now, now. That cute, little Felicia Mae Appletree might be at the laundromat, hmmm?”

And her *mother*, Preston thinks. Saturdays are *so* cool. He resets his zapper gun to smooch mode. “Okay. You talked me into it.”

“Almost there, Preston,” Your Mama encourages. 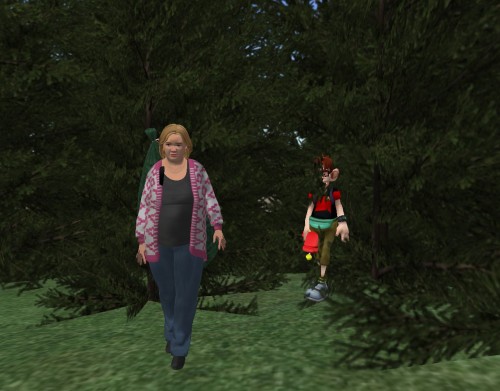 I’m just going to pass that place by, Your Mama thinks when stepping onto Brown Street, named for 1/2 of the famed Brown-Bower team of Sinkologists. What put Pipersville on the map! 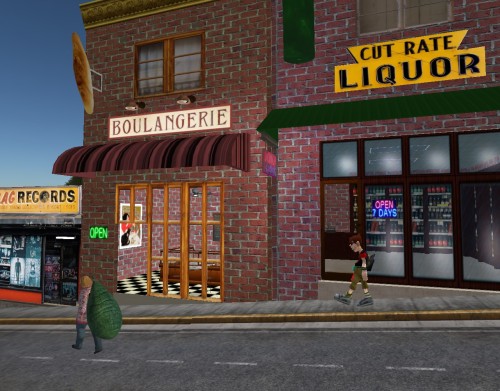 “Jeez, ma. Walk on the sidewalk will ya.” But she didn’t want to get too close to any of those doors over there. Too tempting…

“What happened to the laundromat?” Your Mama asked aloud.

She throws her sack of clothes down in the middle of the road in disgust. “And no water in the sinkhole (as a backup). Damn sinkhole.”

“Maa!” Preston protests, knowing you’re not suppose to cuss that sacred cow ’round these here parts. He scans the area to see if anyone overheard the faux pas. Your Mama cusses again. And again, beginning to stomp on the sack of soiled clothes with all her might. “STINKING SINK HOOOOLLLE!” she hollars in crescendo, then collapses beside the battered sack, crying. Preston goes over and tries to comfort in his own, special way. “Aww maa. Not the tears again. Did, heh, I ever tell you how Antarctica became frozen?”

“Preston, dear, please. Not now.” Not ever, she thought. Because she’d made up her mind. She was leaving.

Spiky-headed Craighead Phillips shut the book. “And that’s how Preston Weston got lost in his dreams, Katy. No tether to reality any longer. The End.”

Tracy Austin (Clown) weighed in. “I don’t think that’s an appropriate book for a child, dear.”

“I disagree,” gruffed Phillips in his whiney voice. “It’s got kids written all over it.”

“Yeah, dad,” offered Katy, wise beyond her years (but, after all, not a kid at the core). “Couldn’t you, I don’t know, chip in or something. He was *your* son after all.”

“Yes,” spoke Tracy again. “I agree. One of your Options should have been chipping in.”

Phillips sighed, realizing he’d have to go back in time again and switch things around. Damn sinkhole.

This was the night Andy Warhole, iron hand ruler of White Horse Village near the southern shores of Blue Feather Sea (aka Little Sea aka Big Lake), learned about usurpers Your Mama and Raggy Too over at the concert area next door. They didn’t intend to pay the tariff for importing songs! Well… all of California will suffer for that. And anyone who has to suffer through Mondays. Words of love, those are. Tough love.

“I’ve seen them in the night talking to white horses. I knew you’d find out sooner or later. So I intervened. I beg mercy,” he gruffed, pecking his paws against the wooden floor while rebalancing.

Mercy, thought Andy Warhole, iron hand raised and then repeatedly pounded against the non-iron one. They could ruin *everything*. All his future plans. Future plans for the past. “Ross C.,” he demanded. “Wake up Ross C.” The robot sprang alert. “Yes sire,” it clipped metallically. “Eggs and bacon and livermush as usual?” Warhole emitted air. “No, this *isn’t* breakfast yet, Ross C.” He shook his head and then indicated Mamaduke, the dog of Your Mama and perhaps Raggy Too. “Tell her, hound, what you’ve told me.” Perhaps she can actually earn her money now as a robot from the future, an *expensive* robot with all the perks, most of which he afterwards found lacking or absent altogether. A *defective* future robot he soon realized he had on his hands. After the seller had conveniently slithered away back into the web of time.

Mamaduke repeated the issue at hand for Ross C. Her thinking lights began blinking on and off rapidly. Bleeping and blipping noises emitted from the general area of her head. Soon she had a calculation. “Kill then,” she clipped out. “Kill them all.” 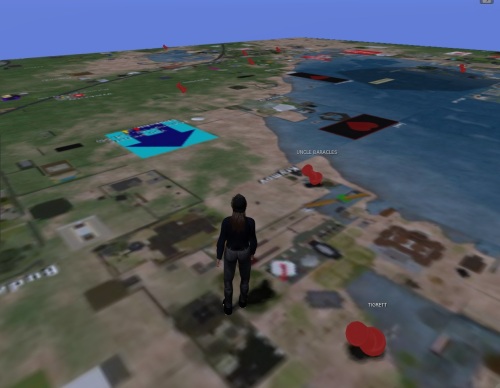 “War-HALL,” he exclaimed from his chair opposite Ross C.’s, or at least the one she stood behind. “Not War-HOLE.”

“I will correct that in my programming, sire.” But she never did. To her he would always be a hole with capital letters. She’d served him too long.

He sighed. “No. You may retired for the night. *Behind* your chair again.”

“As you wish, sire.” Her lights went out as she slumped over in place. 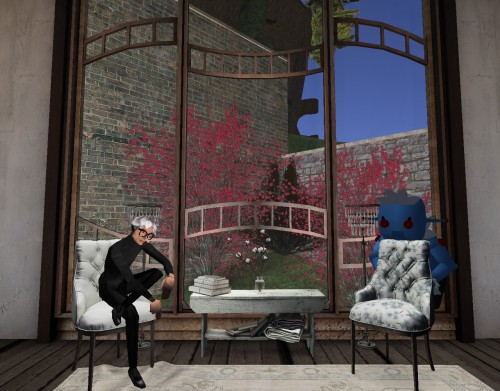 “And the little house beyond?” 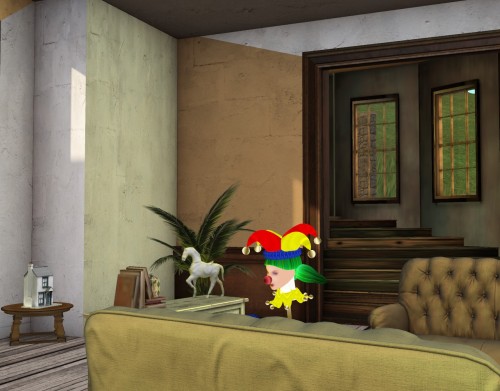 The horse leads, the horse tells.

“His name was Boaz and he was a noble deer and he didn’t deserve to get shot and die.” Your Mama’s tone displayed anger and bitterness. As usual. 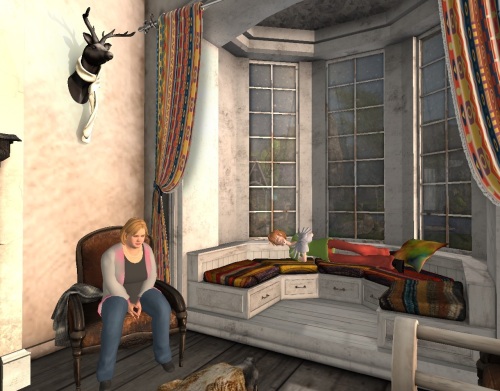 Channeling, thought Raggy. Always forget she can do that. He glanced over at the other deer head mounted on the far side of the fireplace. “How about the white one?” 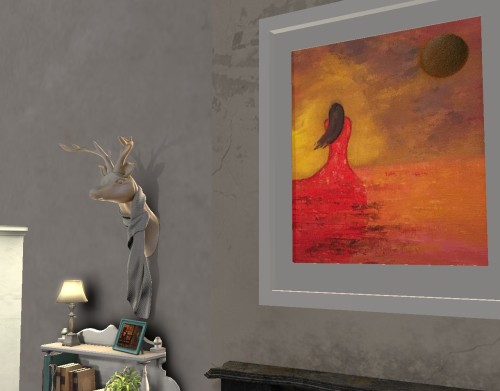 YM closed her eyes, getting in contact with the Great Beyond again. “Viola. Boaz’s mate. Played him like a violin. Or viola I suppose, hee. But they were together at the end. That’s how they ended up here… together. Two stone with one bird.” She snorted and stared over. “Weren’t faster than a speeding bullet, you see.”

“I see,” Raggy followed quickly, trying to steer the conversation away from something that would agitate her further. “When’s the 1st gig?” he then decided to say.

“You know when it is, Raggy. You’re just trying to switch subjects.”

Another snort, combined with a bitter chuckle. “Of course I’m ready. Are *you* ready?”

“I’m not in this one. They don’t need a jester to warm you up here.”

“Jeston the Jester,” she recited. “Remind me how that works again?”

He sits up, looks out the smoky windows at the waterfall in morning light. “Dawn’s breaking,” he said distantly with neutral, cracking voice (as usual). “You better get some sleep. Big day tomorrow.”

Phillips coming! thought Raggy, off the hook at last.

“Super.” Your Mama then turned toward Raggy. “Got any more of those ham sandwiches around? I’m ravished.”

“Careful with those. You know what…”

“I wonder what’s this way?” she voiced defiantly. 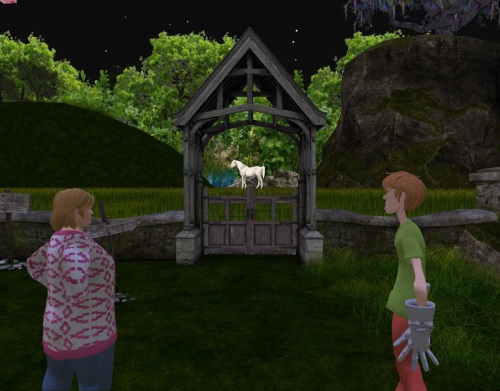