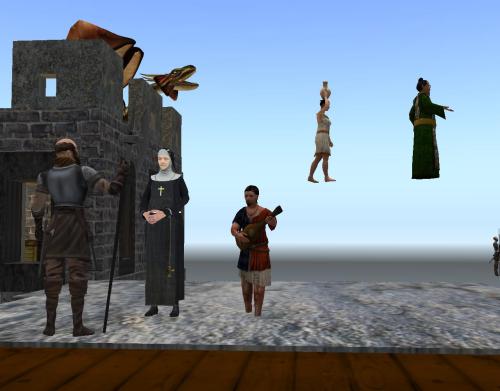 Unlike the others, Sister Martha Lamb’s feet were about to touch ground. The imaginary dragon behind her issued a final roar of disapproval before fading out of existence. Dream becomes reality. “You may pass,” the gatekeeper gruffed when seeing soles to stone, and she crossed the threshold into Southwest Castle, heaven bent on finding the royal child and bringing her home to her true flock.

“Not *you* Strummy,” he then joked to the man now behind her whose legs remain embedded up to his calves.

I’ve looked everywhere on God’s beige earth for them. But I’m not going down there to North Yd to check. Not after what I saw last year with Tessa. Gold to Platinum. 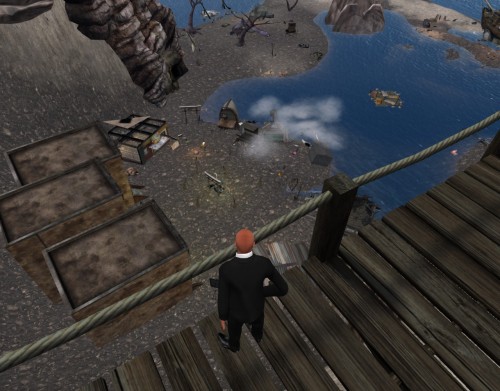 Better head back home in the narrow boat-plane. Maybe refuel first over at Sparky’s since it’s nearby.

Ooops! Knocked over a couple of gas pumps again. Oh well. Nothing scars this old babe. Except that cursed dune of April Mae’s. Must be some kind of magic dune, and in the wrong way, hmph. Probably some voodoo connected to the aberant Omega continent itself. “Sparky!” Monsieur Gold calls through the station’s open door while honking his horn. “Sparky! It’s happened again!”

In the basin immediately below…

… Sally the Spark O Naut (“Sparky”) has waited a long time for Reverend Zoidboro to start preaching. Two days, in fact, since this is Tuesday. But she’s decked up in her Sunday best and dearly hates to needlessly change clothes. 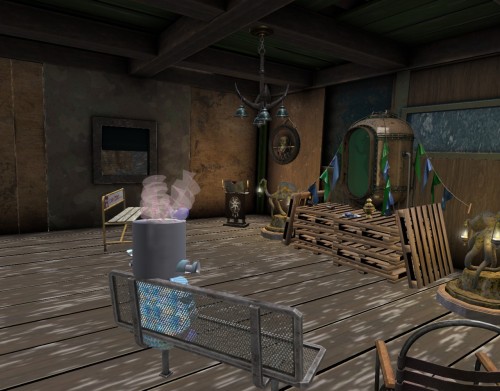 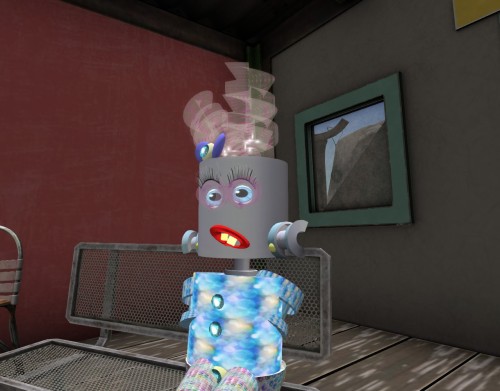 It was a most remarkable coincidence (again). I knew Baker Blinker, er, *Furry Karl* had to get from Horizons-Pluto to New Island by boat, probably with a woman companion in tow, but couldn’t figure out how they’d exit the Horizons subcontinent’s 4th and southernmost region, the “hookless” one (explain that in a little bit), and into Zindra proper. Do they turn east or west at the bottom? I figured east, but there was nothing in that direction.

Then by accident I stumbled upon a portal tonight that solved the tricky problem — or Wheeler did. She decide that Lou would be the best character to play this particular role, and also rezzed Norris beside her as a sounding board for ideas.

“What do we do now?” asked the bleached face Norris to his sitting companion.

“We simply wait here at the canal. It’s already set up. Baker Blinker will never make it out of the Horizons sub-continent by boat. We’ll make sure of that.”

She smiles while watching the dance of rippled water beneath her pale, dangling feet. No choice to make now.

The Musician as Sikul Himakt was having that dream about roses again. Scene: VHC City; The Diagonal.

He sits in front of a video game featuring the Rising Sun with an odd retro cartoon punk who speaks Japanese. 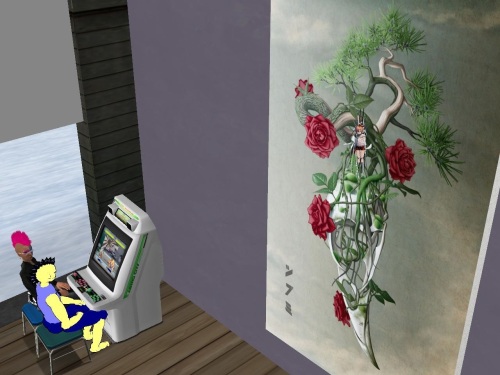 In the dream he understands him. “There’s no side to choose,” he says as the game remains unplayed. Tiny Hermania looks down from the center of her rose tinted world, protesting the idea. “Choose!” she calls while hanging from a vine. 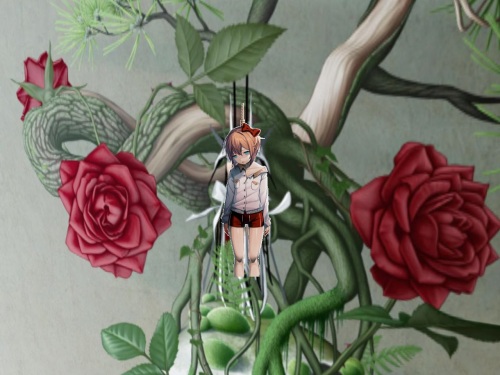 He grasps the red joystick opposite the green one. Pain! They were at the island tree, then. The Musician once again shows the cartoon punk the wound on his outturned hand. 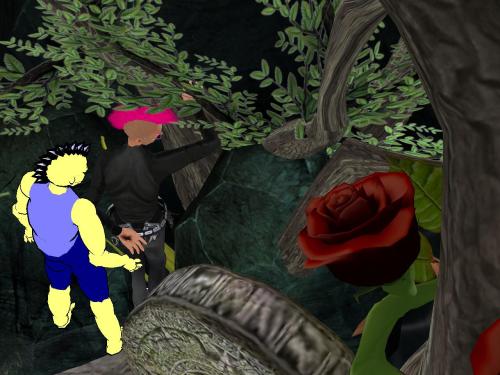 The other hand he keeps to himself.

“I will remove the thorn and make this one better too,” he says, still speaking somehow understandable Japanese. The Musician starts to wake up. “I will make this better.”

He stares up at Jimmy, who is wrapping his left hand. The right one has already been bandaged. He sits on the Asian couch at their lodgings. Jimmy chatters while continuing his twirlings. “As I said, I’m a physicist not a physician. But I worked with a man at the Australian Astronomical Observatory who studied stellar anomalies in the Southern Cross for years. Same thing happened to his hands, and also his side. Stigmata it’s called. Identification with the crucified Christ.” The Musician was about to protest that he wasn’t religious when Jimmy guessed the confusion. “Doesn’t matter about your faith. Something else is behind it. Philip wasn’t religious either, but he was a fanatic. Of science. Perhaps that’s all it takes. And… there, that should do it. The bleeding doesn’t seem to be stopping but it’s slowed down. Maybe that’s all we can ask of this condition, if yours tracks with Philip’s.”

“And stay away from that blasted island!” added Wheeler forcefully behind him.

After The Blackstars’ latest jam session, lead singer Improvio and drummer Woody Woodmanson hung back in the sky island to chat about the band’s future. Howard, Pretty Man, and Sheriff had all headed to the Ear Bar down in Soho.

“Well Woody,” began Improvio. “You said you had something to talk about. I think it went pretty well tonight. Band’s pretty tight. I had worries about Pretty Man especially but it’s all shaping up. Pretty Man’s not just another pretty face but has real talent at the keyboards.”

“*Howard* was on the keyboards tonight. Not Pretty Man. You need to turn around and acknowledge the band now and then.” Woody was in an unusually pissy mood tonight. The rehearsal didn’t go as well for him as it did for Improvio.

The blue lead singer tried to assuage his wood toy drummer. He changed the subject for a moment. “Tell you what, why don’t you take me down to the center of the Purden Woods tonight and show me this Core-Alena tree you’ve been on about. How about that?”

But Woody would not be deterred. “Here’s my thing,” he said, continuing the mood. “Sure we can jam and jam and jam until we toast ourselves to death. But it’s all spinning wheels and slinging mud. Nothing’s *written down*. Jam, jam, jam,” he said again. “We need…”

“No,” broke off Improvio. “I’m not going back to Gaston and interact with those other two.”

Woody stopped walking on the log and hopped off, holding his brightening key in front of him.

“I’m getting a message from the Great Cheese,” he spoke solemnly. There was a small pause, then: “Yes, you must return to Gaston. But it’s not Gaston, it’s *Garson*.”

“What?” exclaimed Improvio, as he turned to see what Woody was transfixed by. A large, bald man with queerly tilted head had appeared on the edge of the sky island. 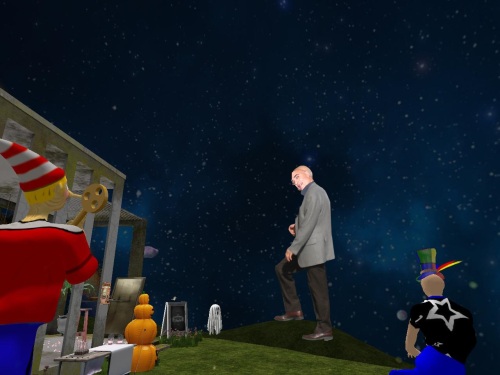 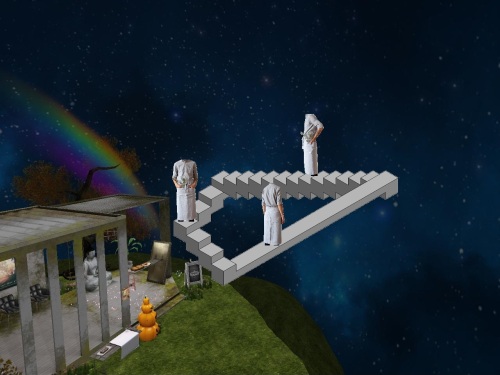 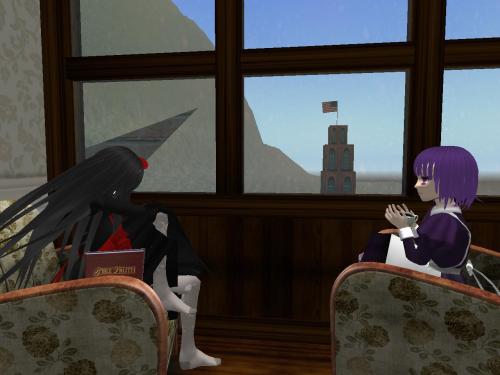 “Weird how my name is Nancy, and I’m playing a girl named Nancy in the play.”

“Not at all odd,” responds the purple haired Bettie sitting in the opposite seat of their posh Lapara Hotel room — the 145 dollars a week one, not the 100. “Fate, we must call it. Like ‘The Shining’ (movie). Jack Nicholson played Jack from (Stephen King’s) book. Daniel played little Danny. Just like your own Danny. We must think of these things.”

“But why would Nancy shoot Gideon if he’s already caught and jailed? What’s my motivation for playing this obviously psychotic woman?”

“I understand it completely,” Bettie says. “Passion rules over all. Nancy’s love of her life had been robbed. So she robbed the robber of his life in turn.”

“But then her *own* life was robbed by the robber after he became… a vampire? Is that really believable?”

“The story has it that this is true,” replies Bettie. “Why don’t you study the script more and take notes.”

Nancy doesn’t even give a glance at the “Bible Truth” script leaning against the chair arm beside her. “Oh I’ve looked at that again and again. I’ve memorized everything by now. Might as well throw it out of this high window for all it’s worth.”

“Well,” joked Bettie. “As your *understudy*, haha, you could just abdicate the role. Let me take over. I could have poisoned your drink there, let’s say. You know how bad I wanted the part.” She smiled.

“Not a bad idea, Bettie,” Nancy said, absorbing the inside joke. “But I’m Nancy let’s face it. Nancy plays Nancy. And you, as Bettie, will play Bettie, who is the understudy to Nancy in the play as well.”

“In the play within the play.”

“The vampires,” complained Nancy further. “Why are they called vam*pures* in ‘Bible Truth’?”

But Bettie was distracted by the noise outside the window. “Oh Lordy, here we go.” She pointed down. “Evangelistics. Looks like you’re not the only one who doesn’t cater to the idea of mortals rising from the dead.” 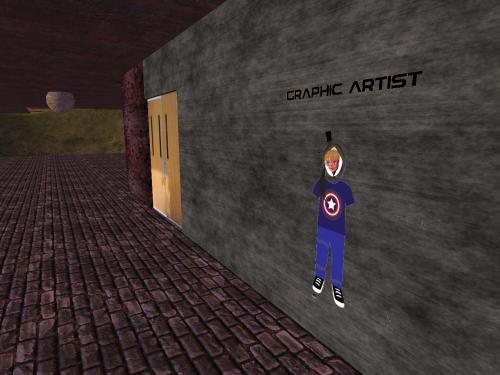 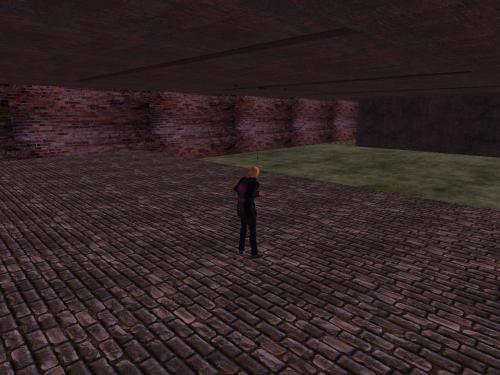