He approached cautiously from below. 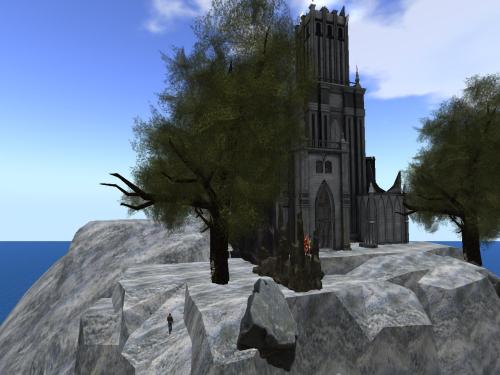 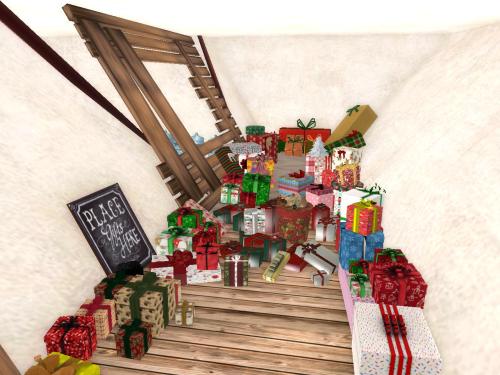 He’d been saving up presents for some time, preparing for the worst. Flood! they warned. Global warming gone rogue! they cried. Thus the ark.

Or so the story goes.

After a return trip to the box, they ate Christmas dinner up top. “Shelley, you seem depressed,” he spoke. Probably just leftover effects once more, he rationalized.

“Oh. Just thinking about The Moon again. Where are we on it?”

George/Musician didn’t bother to correct this time. “Tranquility, love,” he said instead. “Remember? We landed there, all of us Americans through two specific Americans. All in the Family.”

Shelley Struthers buried her suddenly aching head in her folded arms, trying to forget everything. The nearby lemons and drink bottle were reminding her of something she didn’t want to see. 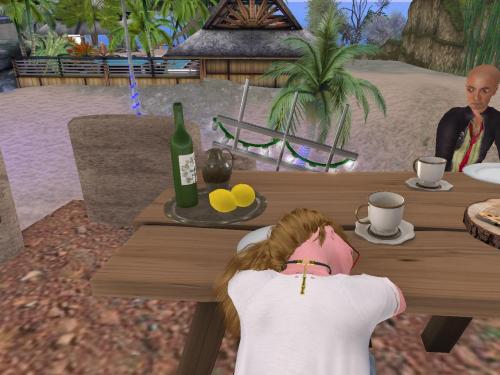 “Would you like to open a present?” offered George/Musician. Maybe that would help her mood.

“Yeah I think so. You know… we’re not going to be able to stay here, you and I.”

“Oh yeah. Why not? Am I suddenly not good enough for you, Shelley?” He huffs a bit. He was expecting this sometime but hoped to delay it until after football season. He enjoyed watching 2 games in one through this dual TV setup. He wouldn’t be able to afford 2 on his own.

What could Shelley say? That the sex eventually didn’t make up for the looks? Surely he knows about the hands by now, and the hiding of the face. And it’s getting uglier, she admitted, in the bright light of day. In the dark it’s easier to pretend. She hoped she could get use to it. Not working.

That night she dreamed she was trapped inside the stomach or innards of that big stuffed purple bear in the living room, ready for birth that never came. In the dark herself. Satisfied with the lot of her life.

But she woke up, ate her Toastie Oats cereal, choco chip dodecahedron style, and, staring out through the iron grid window at the magic bus from whence they came — parked down by the water still — understood anew that she needed to be on her own for a while. She looks over at Johnny’s mug. Jeez it’s worse than ever this morning. It’s like he was made to be disgusting. And, she then realized, perhaps he was… perhaps this is all… some kind of ruse. A test. She’d had flashes about who gave her the bus, who sent her here. A woman named Wilson who was also friends with a Fox. A person who — was much like herself, yes. A *mother*, she discerned, turning her table around to stare at the bear.

Birth is what you make of it. Cradle to grave, but in the middle, always The Cross. Which she’s on. She’d been absorbed in the Omega continent’s north to south arm! Somehow that made it both more real and more irreal at the same time. Birth, she realized. It is coming. Or: not.

“Dear, sorry, you’re kind of in the way of the TV.” That grating man-child voice too(!).

She stared at it now. “It’s some kind of *test pattern*, Johnny. Get over it.” Just like this life she’s living here, she also thought.

(pause) “I thought Mistress and Venus were the writers of this tale. On-the-Mattress Mistress and her sister. Mistress’ sister.”

“No. I write them.” Smoke gets in his eyes but he doesn’t love himself. He loves the other. “And I have help. The artist. Just downstairs. You know him too. Another Barry. just like we now have 2 Lucys. He sleeps while I write. I write while he sleeps. It’s a win win situation.” He exhales more smoke, readies his hands on the keyboards. “2 hours till sunrise and the other Barry takes over. Better get back to it (type type type bell/carriage return).” 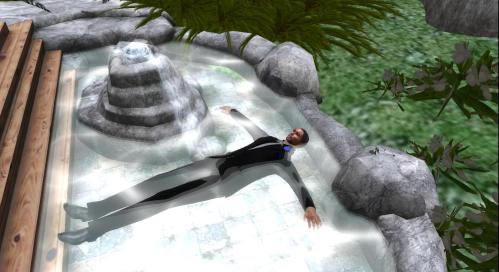 Actor Lemont Sanford demonstrates how perfectly he fits the role of Blackbart in the current production of Sunklands photo-novels by laying in this pool of water exactly his length, head against stone and feet brushing wood. “Like a glove,” he speaks up to the director in charge of casting, mixing idioms of sorts.

“Well, this is where you’ll die so that’s nice.” He tries to frame the shot with his hands. “Yes, yes. Nice fit for sure, hmm. Now, how are you with claustrophobia?” he says down, knowing a coffin scene would also be involved.

“This board must be broken Debbie. I can’t get black to move first.”

It was over in 13. White (Dickie (Archibald)) had no more to say. Sister Debbie retreated back up the cave tunnel from the meeting in the underground game room to her Hobbit Hill rental, pondering what just happened and the true nature of reality. *Why* can’t black start? Who goes first, what goes second? She doesn’t know; can’t figure it out currently. There must be a game of chesskers where the rules are reversed, she ascertains later, but only after the mission is done.

“We’ve just got the one piece left,” Rescue John responded to Rescue Joe’s question about the face. “But it’s a crucial one. Looks like, let’s see, we’ve got a green eye instead of a blue to match the other. Asymmetry: can’t have it.”

“Boss wouldn’t be please,” Joe said back weakly, and looked into the distance from the top of the Gap toward the Hobbit Hill rental, toward Jer and Jem’s Ragged Rocks abode, toward Tar and Jey’s watermill home, and toward the cottage on the perch currently housing interns (Devil) Dave and Karoz straight from fabled academic mecca Crabwoo after their final exams were done and over with. He knows the answer lies out there somewhere. But here… they can only insert the wrong piece for now; no other way. He says this to John, who agrees to “finish” the process with a big sigh. “Green it is,” and crams it in despite the ill fitting nature of the thing.

Her flying craft landed with a soft crash on the beach, barely avoiding a dancing Grey.

No need to put clothes on for the extended visit, she figured. Since she was seeing her “mountain man” again, ha. She’d just be out of them in a jiffy.

These Greys weren’t as lucky.

He kept waiting for the red book to right itself as he read it in the sand down at the beach. Someone approached: an opposite. “I will take over now,” he said confidently, as if his black and blue color demanded it. 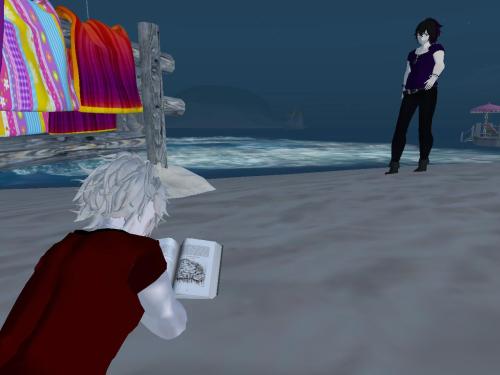 A new crop of students arrived at the Princess Castle School for Design and Wealth. You’d think they would have learned their lesson after what happened to Dimmy and Marilyn last semester down at the end of Route 12 but, no. The VW Beetles of the world would still in all likelihood have their backs turned toward them while the glitzier ones demanded all the attention. And the car loaner agents laughed all the way to the bank (by the cliffs (by the sea)).

“Rev it up and see what you think,” agent Scott Johnson said to Tommy Twostep within, fresh from the Outer Rim where fast and furious cars like this were few and far between. He was dazzled by the array here. Daddy would understand the extra cost, he rationalized while crossing 6K rpms heading toward 7. 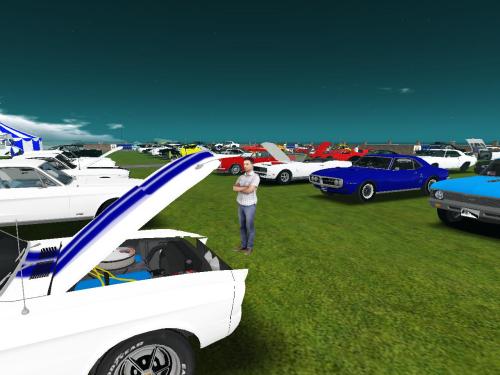 the sphere is the cube is the sea is the whale

She couldn’t stop playing with the Cube of Space, no matter how hard she tried. She’d given in to the urges, complacent in the moment…

She always knew she’d return to (the general) Crabwoo (area). Horses — in the middle of Horsa, or at least an ass, donkeys they call them around these here Northern parts. Loaded down with flowers for the market. And where was that place? That’s what she had to find out next.

She hadn’t heard good music in what seemed like ages. Yet here she was, listening to the beautiful crooning of famous Lena Horned in a cafe she just stumbled upon by accident it seemed. Rehearsals of course, else the place would obviously be packed. Another black person accompanied her to her immediate right drinking bitter wine. Zach Black — caved in to the pressure from the central government of the South. “You help her reach her highest peak pitch or else,” Jer Left Horn demanded in the alley out back of his Cass City club, brother Benny Right Horn with grease monkey wrench beating in hand next to him. A threat in other words. If nice doesn’t work then it’s back to the routine of being bullies, which they’re better at than regular diplomacy anyhoot. Horns of Hatton must be completed. A continental tour will be the warmup. And thus here she is, in the far North, ready for conquest like the British Beatles did with America. Similar. “We have to get you another hit,” said Zach Black after the alley scene was over, now understanding his position in the big scheme of things. Else: walking dead. Like Jim A. Brown before him.

The phone rings for her but is answered by another. She has a personal assistant now. Thank Gods. Time for herself at last. 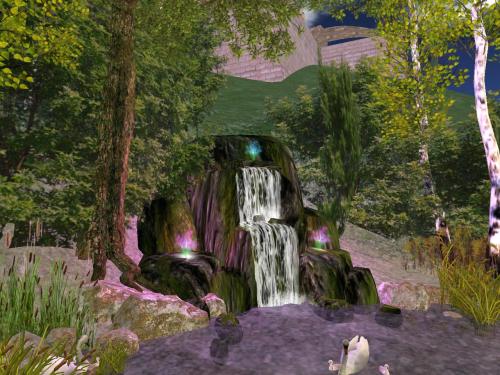 I must get down the continent to confer with Jeffrey Phillips and partner Man About Time concerning the future of Collagesity. But I already see the writing in the cards. It won’t last. Collagesity is a place laden with collages, of course, but isn’t a proper archive. It’s where Baker Bloch *made* the collages, or helped inspire them as he hung each one individually in its gallery upon creation. That way he could better see the evolution of the series. But (this kind of) buck stops with the newest series called Picturetown. This is a *different* Jasper, not Illinois but Iowa. And this leads us to (the) Nautilus (continent) as a whole. We have our centering. But this centering could occur *anywhere* on the continent now. It doesn’t have to be between the two roads 13 and 14. It could be here — at Rooster’s Peninsula. Certainly there’s more neighbors around to give me energy.

The dancer, he remembers. The fox on the run. Jasper itself. Must see if she’s still there. But that’s the siren’s call again. The dancer who is the world. 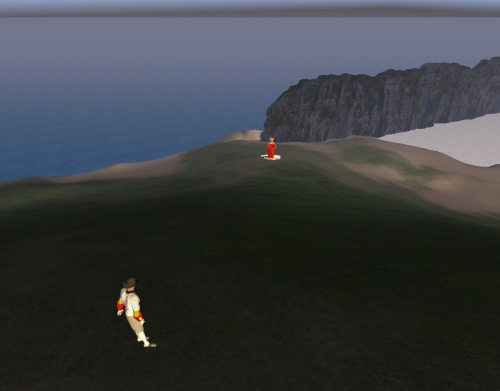 I suppose I should go see if those curtains are still there on the slopes of Roost Peak. Could it spell curtains for… me? It brings me back to confusion on what exactly is the body, the neck and the body and the head attached to it. Maybe Stumpy could help (again), since he was able to reattach his own some time back. But first: curtains.

“I’ll make do on my own, then. Come here little fishie. Come to ma-ma.” 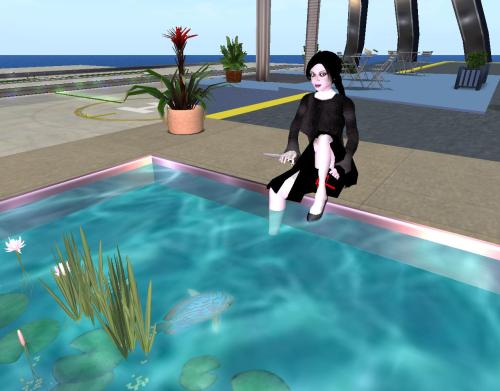 She was kind of cute, if a little weird, he was thinking on his break in back of the food van, not seeing how Wendy had subsequently gotten the meat for her chips.