Simpsons to the rescue! 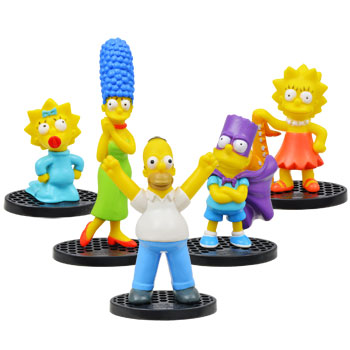 The wife and I visited the local Dollar Tree tonight. 4 out of 5 Simpsons purchased (minus Marge — soon!), and also what appears to be the arch-nemesis of Taum Sauk in the continuation of the Bigfoot art/toy/junk happening (“Afterfoot”?). 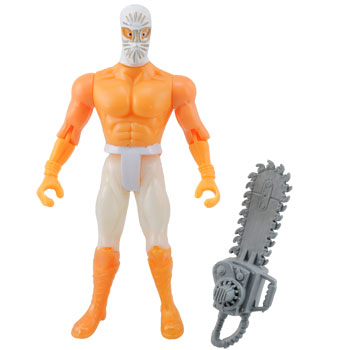 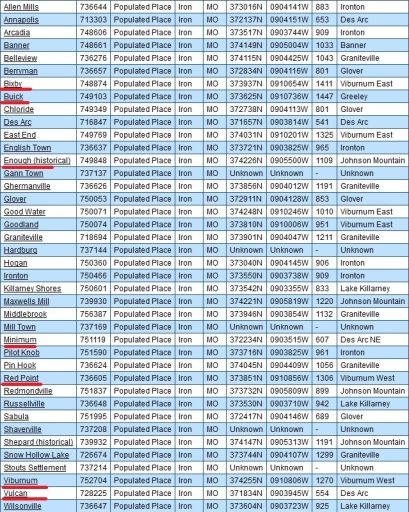 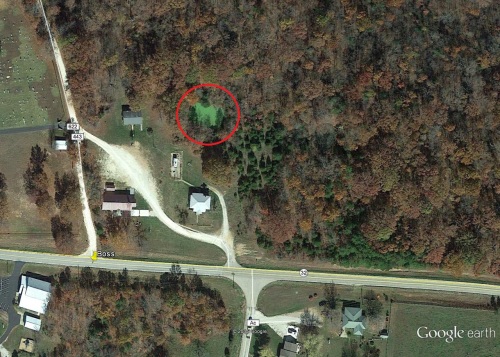 4.23 miles from both Buick and Bixby in neighboring Iron County. Not chance. 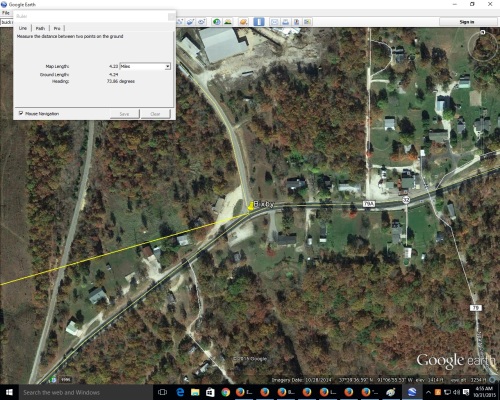 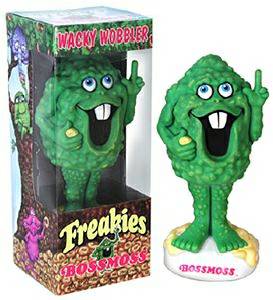 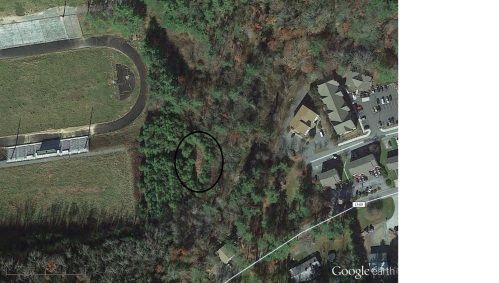 100 Foot Swamp has been renamed Bigfoot Swamp, a natural transition (it has a “big” feet of length). The projected town or “toy happening” around it becomes Bigfoot then, most likely, with a center near the northern part of the marsh, where a feeder stream enters it via an uphill pipe.

The only US population place named Bigfoot presently is in Frio County, Texas. The general area of this village has already been seen in a map displayed on this blog from May 2014 called “Strange 01″…

There I discuss the conjunction of two towns in Medina County to the immediate north of Frio, or Noonan and Devine. Glenn Strange plays the bartendeer Sam Noonan in the long running western seris Gunsmoke featuring James Arness and sheriff Matt Dillon, an icon for our time. The town Noonan in Texas is one of only 2 in our US of A, the other being in Divide County ND and near a *Strange* Siding. Noonan and Strange conjoined again. Near Noonan Texas is a city called Devine. There are only two pop. places of that name as well, with the other being in Colorado near a Vineland, and itself having a variant name of Vineland according to the GNIS database.

Notice several things here in addition to the stuff I outline in the “Strange 01” post: Divide (County, ND) is almost an anagram of Devine. I now work with a guy named Devine, who is sort of my boss as I perceive him. He cryptically emailed me several times on the weekend I discovered the Bigfoot Swamp. Now I find the only US Bigfoot conjoined with the only incorporated US Devine, and the only one of any significance. Bigfoot Swamp, a natural area bordering the Blue Mountain Urban Landscape and what could be considered a direct extension of it (that’s how I view it anyway), can stand for the event *furthest* away from this Urban Landscape in the Blue Mountain area, or the encounter with a Bigfoot like creature in the furthest recesses of Frank and Herman Park the winter of 2012/2013. This is an encounter with a completely *alien* culture, seemingly, and as far away from humanity as you can get. It is non-human. It creates not stuff we humans consider normal, like roads and houses and malls and hospitals and HugeMarts. So the near Bigfoot (Alpha) overlaps the far Bigfoot (Omega), and perhaps in ways I cannot understand yet (involving Devine?).

On the below map we see the close conjunction of Noonan, Devine and Bigfoot in Texas, with the word Devine strangely absent on the map despite being a town of significant size. Represents the soon absence of the other Devine? Maybe. If so, what name will take its place? Is that written out in maps as well?

“We need to go back to Willard-Note, then, and look at more examples perhaps. Willard is a note in the Book of Music known as Winesap. We know what Winesap is. It’s in Herbert Domain. You can make Cash off of it. Get Credit for it. At the top is the 2 Hermans and the 2 Fishers. You know what this is. A door, an opening. You know that Bono *shuts* the door after ’23. Faulkner County is deadened, but that may be a green book behind the blue and red book we are dealing with. You know that too.”

Yes. In the flesh.

Thanks for showing up. We have a little time I suppose.

Always time for me, right?

Yes. So the trail leads to the Beech Grove which is the Beach City — for Willard — and inside this grove he thinks of Kate Swift. The reverend who has broken a corner of the Glass in his bell tower study also thinks of Kate — the Lady. He thinks the lady who smokes in her bed and reads is sinful but he also remembers reading books of ladies’ smoking so perhaps it is not so un*Ordinary*. Smoking is ordinary. Smoky Ordinary.

“So continuing… I also believe Lovely and Beauty relate to Kate Swift, as described by both Reverend Hartman and also George Willard. As Lovely is also Love + Lee, this may related to the Civil War and Confederate Army led by Lee, and war fields involved, many of which are in Virginia. We’ve already encountered Love Valley in various disguises.”

I thought you had gone to bed, Hucka D. Maybe you should turn out the light.

Oh… just borrowing your computer for a while. Couldn’t you sleep?

Kept thinking of Warfield and Paul and wars in general. Civil War.

I see that a Warfieldsburg is only several miles north of Winfield in Maryland, Hucka D. Missed that before.

Didn’t Kermit the Frog with the face of Cardboard Derek Jones greet Baker Bloch in the afterlife at West End? Think so. And also Kermit has come up regarding that rock in Sharieland, the one that looks like a frog. *Wait*, there was a *Dolphin* Rock as well there. Wasn’t there? 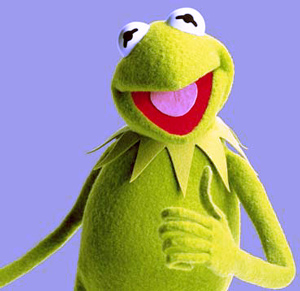 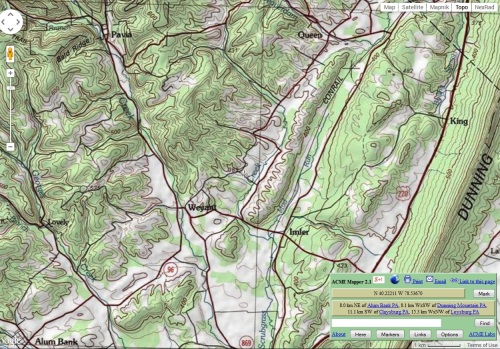 It’s times to start thinking about a new Carrcass. I wonder if I’m like Dexter in this respect? (but Dexter isn’t on my list to use — don’t think).

Leonard and Penny’s relationship hits an impasse when, while on a double-date with Howard and Bernadette, she reveals that she has taken career advice from a psychic, only for Leonard to laugh, infuriating her. Later, Howard tells Leonard that if he wants to be able to be in a relationship, he will have to accept that people will have differing beliefs. Leonard apologizes to Penny and agrees to visit her psychic, despite her having declined to read a book debunking psychics, remarking that “one of us has to keep an open mind.”

Meanwhile, Sheldon and Raj attend a university mixer, with Sheldon as Raj’s wingman. Sheldon only agrees because Raj bribes him with a Limited Edition Green Lantern lantern, which Sheldon subsequently carries with him to the mixer. They meet Abby (Danica McKellar), who takes a liking to Raj, and her friend Martha (Jen Drohan), who tries to connect with Sheldon. They end up playing Rock Band at Sheldon’s place. For a second date, Raj bribes Sheldon with his pair of Hulk hands, signed by Stan Lee. After Sheldon announces that he is going to bed, Martha asks if she can join him in his room to avoid Raj and Abby, who are “getting busy”. Sheldon obliges but immediately leaves to sleep in Leonard’s room, leaving Martha alone.

Leonard and Sheldon return from dinner to find their apartment broken into, with their TV, laptop, hard drives, video game consoles and video games stolen. Sheldon fears being alone in the apartment due to the robbery, so he forces Leonard and Penny to stay in the apartment. The next day, Howard designs a state-of-the-art security system for the apartment using components he “borrowed” from the Department of Defense. However, after Sheldon himself is caught in the security system, he decides that the apartment is no longer safe and plans to leave Pasadena for a safer city. After rejecting Enid, Oklahoma, Boone, North Carolina and the entire state of Nebraska (because Penny is from there), he decides to move to Bozeman, Montana. But when Sheldon arrives there, he gets robbed again, so he returns to Pasadena.

Sheldon’s search for the answer to a physics problem keeps him up all night for several days and he becomes obsessed with finding the answer. His obsession with solving the problem goes to the extent of visualizing food as atoms and even sneaking out in the middle of the night to go to the mall ball pit, forcing Leonard to rush to the mall and get him. He then decides that he needs a menial job to think better because Albert Einstein came up with the Theory of Relativity while working at a menial job at the Swiss patent office. Since the United States Patent and Trademark Office is in Washington DC, and he does not want to move out of Pasadena, Sheldon interviews for any menial job with the County of Los Angeles. At the county office, Sheldon angers the woman interviewing him, to the extent of her calling security to remove him. Sheldon then decides to work at the Cheesecake Factory with Penny as he considers her job the most menial of all. He shows up and works as a busboy and waiter without actually being hired or demanding pay, and turns out to be a more efficient waiter than Penny until he drops and breaks a tray of dishes. The scattering of the shattered pieces leads him to the answer to his problem, and he promptly walks out without cleaning up the mess.

Meanwhile Leonard, Penny, Howard, and Bernadette go to disco night at the roller skating rink where the guys embarrass their girlfriends with their outfits and dancing. Raj is left out as he does not have a girlfriend, even though it was his idea to go to the skating rink. Eventually Raj successfully pressurizes a reluctant Howard to take him to the skating rink.

Recurring character: Melissa Rauch as Bernadette Rostenkowski
Guest stars: Yeardley Smith as Sandy and Kevin Brief as Glenn
Title reference: Sheldon’s attempt at solving his problem by working in a menial job, comparing it to Albert Einstein’s discoveries made while working in Switzerland in the Patent Office.

Butterfly is an unincorporated community located in Perry County, Kentucky, United States. Its post office [2] is closed. It was also named Leonard.

Noonan was founded in 1907 and named after a family that had business, farm, and coal interests in the area. It was once known as “The White City” because of an ordinance requiring all buildings to be painted white.[6]

Glenn Strange (August 16, 1899 – September 20, 1973) was an American actor who mostly appeared in Western films. He is best remembered for playing Frankenstein’s monster in three Universal films during the 1940s and for his role as Sam Noonan, the popular bartender on CBS’s Gunsmoke television series. Strange was of Irish and Cherokee descent and was a cousin of the Western film star and narrator Rex Allen.

Strange was born near Alamogordo in tiny Weed in Otero County, northeast of El Paso, Texas, some thirteen years prior to New Mexico gaining statehood. He was born as George Glenn Strange, the fourth child of William Russell Strange and the former Sarah Eliza Byrd. He was an eighth generation grandson of Pocahontas and John Rolfe of Jamestown, Virginia.

Strange played the Monster a third time in Abbott and Costello Meet Frankenstein (1948), with Chaney, Jr. and Bela Lugosi.

Noonan near Devine in Medina County, Texas. The only other US Devine, in Colorado, is just below Vineland, and Devine itself is listed with a lone variant name of Vineland. My thinking in respect to WH X-ing: Devine is a central place in The Crossing’s Vineland. Below Vineland is Weed — that was already predetermined. Now I know that our Strang or Strange is from Weed as well through Glenn Strange from Weed, NM, famous for his portrayals of Frankenstein’s monster and also the bartender Noonan from Gunsmoke.

Only other *Noonan* beside the one in Texas is in Divide Co., ND near a *Strange* Siding. How odd; how strange if I may be allowed.