“Still no pot here,” complains a peering Chuck Cheese, out on bail for an hour from the Gaston-Berry Police Station. “Where *is* Alex?” She pauses. “Or was it Albert?” 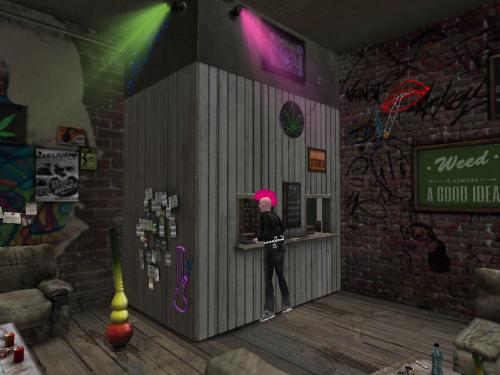 Quickly checking the world map, she sees a green spot moving toward her own green spot. “Someone is coming. Could have been tracked. Bail time’s up anyway. Got to head back.”

“Good. You’re back on time this time I see. But what happened to your hair?” asks Maury “Jiff” Monroe, the police staff psychiatrist.

“I sometimes take it off at night. Bed time, right?”

Chuck blows out air in exasperation, rolls her eyes, and flings herself down on the cell cot. “15 more minutes down-time? Pleeeasse?”

An acquiescing Jiff goes back to his cubicle waiting for 10:15, when the grilling will resume. First off, he needs to find out about this Alex or Albert. Each bail period, Chuck spills a little more of the beans. It’s almost as if she’s doing it on purpose. Is she? he asks himself. 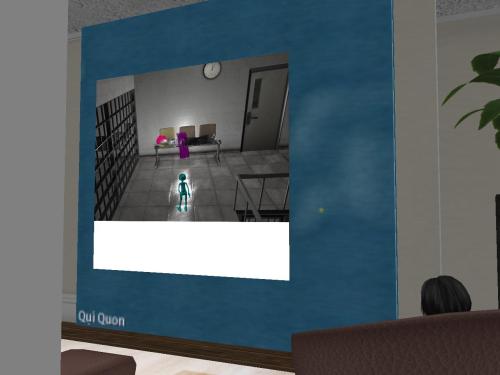 “Why did he steal her color?” asks a studying Billy Jean Kidd over in Middletown. 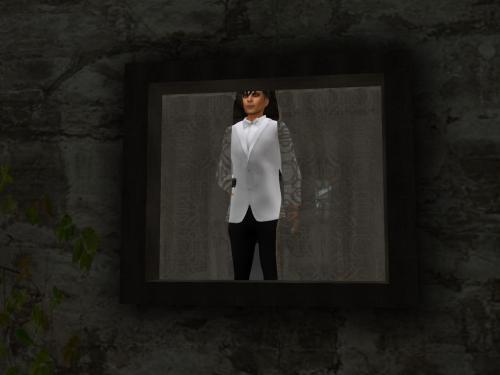 “What are they doing over there now?” demands Wilson from inside the room. She was a man still, but getting prettier by the day, it seemed. Soon she may have to change over again. Hold on to those eye scars as long as possible!

“Nothing,” answers her most recent invention Sidechick Corea as he keeps gazing across Central Park toward Main Street. 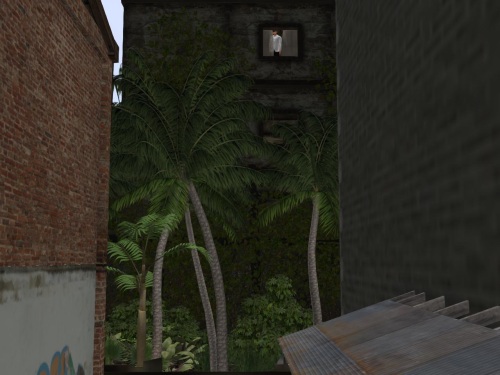 “We could dig deep into the Jeogeot Gulf/Korean Channel with this one,” she said when finding him as a freebie demon on the SL marketplace. “Mr. Babyface has a decision coming up. Axis or Allies? Does he go with his half aunt or his little dog Ttoo? No, that wasn’t the name of Mr. Babyface’s dog. Poo, she thinks incorrectly again. Li’l Poo Poo. But then she remembers the actual name and lets it drop.

She manifests the two rolling pins on the table from her inventory. “Well, anyway, it’s time for me to figure out these objects Sugar Dumpling brought with her to the police station over there. Best guess: they’re not rolling pins but scroll rollers. Jump out of that cheap costume and get back on my shoulder, Sidechick. I need some doubled up third eye thinking for this mystery!”

back to the ward

The tutu wearing sack of sh-t has returned, Gaston-Berry Police staff psychiatrist Maury “Jiff” Monroe thinks, staring over from his cubicle at Gregg Oden passed out across three chairs against the west wall. He’s going to be sent up the creek a loooong time for this one.

Something’s different about him — it — though.

Of course: the hair. 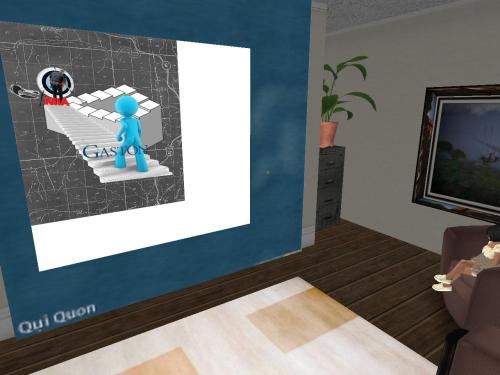 “(There’s) something about that police station,” speaks Billie Jean Kidd while studying former blog posts from her tower chair. 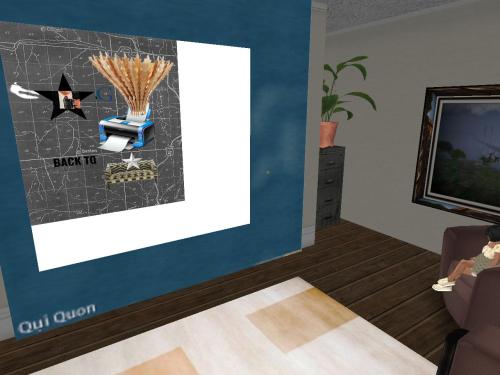 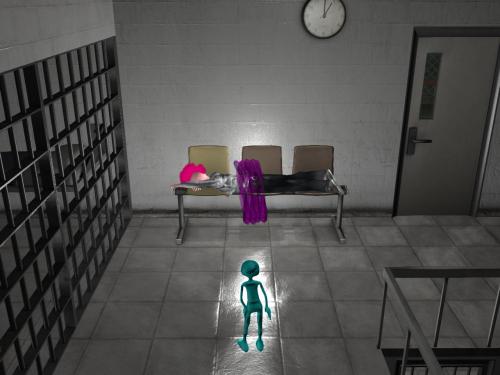 “Why did I come here Casey?” Duncan asks of his colorful fellow inmate next door. “Why oh why oh why?”

And a quick jail break wouldn’t be happening now that Tiny Tina is dead. 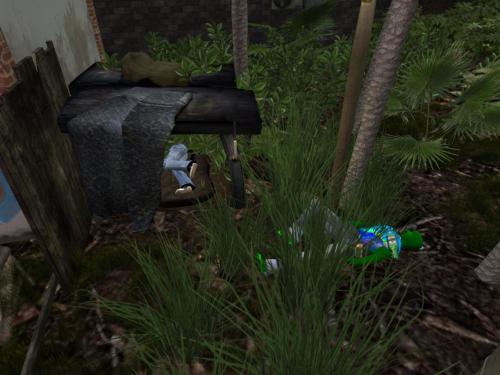 Luckily for Duncan Avocado he was only dreaming, his actual location being just behind the police station in Central Park. And fellow homeless person Casey, before he got too drunk and passed out, had filled him in on all the details about Gaston’s 2 sugar houses past and present. More soon…

Tagged as Casey the Alien/Casey One Hole^*~~%$, Duncan Avocado^*%

The place was way too dangerous for George, so Duncan had a go at it alone. He teleported into the very center of the sim just like the characters in the blog suggested — this Central Park.

But it seems George might have already been here! Duncan thinks, looking at what he supposed was a child’s fort. It wasn’t.

Duncan unwisely walks into Main Street from his concealed position in the park. Now if I remember correctly, he deliberates, the police station will be up here to the right. 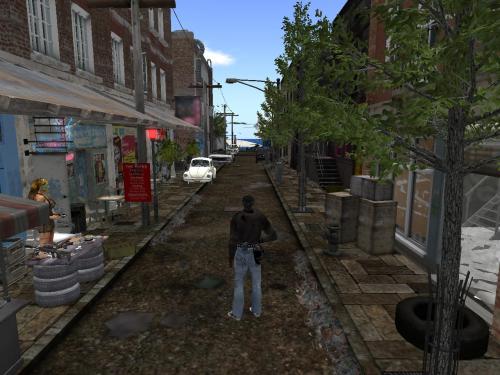 It was a little longer trip than expected in risky territory, but then he was upon it. Potential sugar house! Hard to even tell it was a police station from the ground level.

Qwirty21 smiles at him from behind some walls. Best to get inside as quick as possible, he realizes, and walks through the main door.

But the barred entrance to the inner sanctum of the station was locked. Duncan decided to wait in the reception area until a policeperson or other employee showed up, so’s he could hopefully get some of the story behind the structure.

Brushing aside a couple more propositions from the outside for the next hour, Duncan then watches Sugar Dumpling enter the station in a huff, beating her rolling pin repeatedly against an open palm.

“I’ve been waiting for one of you to show up and stay a while, ” she started. “Where is he? What have you done with my Jacob?!” 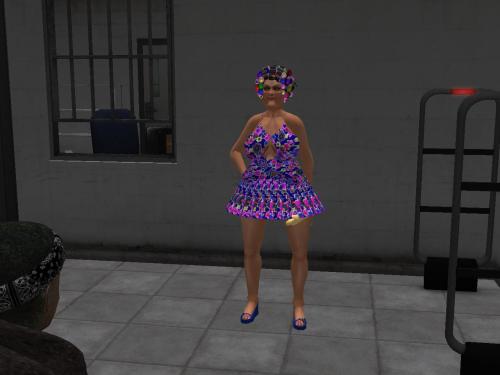 They were told to stay close to Gaston’s Central Park and act like flies on the wall. Pretty Man disobeyed one morning and wandered down to a side patio beside Sugar’s House, thinking he would be concealed there behind a tall fence. But he was almost immediately spotted by BitterAlmond1995 and propositioned. “Cure for your ails,” she claimed about herself through the intervening walls. Quickly teleporting back to safety, Pretty Man wiped his brow, seeing he wasn’t followed. He was not an alien, true, but what cost for surface beauty? Sugar’s Berries (their slogan: “ripe for pick’n”) stick pretty tight to her house, just like he and his fellow escapees Gregg Oden, Chuck Cheese, and Maury “Jiff” Monroe should keep close to the park, the calm eye center of a storm which contrasts to that eyewall location of greatest sound and fury.

But Sugar herself, being of greater vision and knowing all such storms have such centers, knew why they were there. Her counterpart Jacob I. had escaped in a larger way, with accomplice and experienced jail breaker Tiny Tina trampled under foot. These dudes and dudettes had nowhere to go, like caught in paper.

I will be a fly back at them, she thought the morning of learning about Pretty Man’s intrusion into her territory. They are in my vision and will not leave. I know where they are. There’s a secret parchment, secured by sealing wax, which might allow her control of the *other* “Sugar House” in town, the one now called the Gaston-Berry Police Station. Because there was no Berry to patrol. Berry did not exist except as a concept. This was her secret weapon.

Rolling the dice, she unrolled the parchment.

“The sugar house on the corner of William Street and Duane Street in lower Manhattan was used as a prison by occupying British forces during the American Revolutionary War,” states old-time cop Ricky Bendicky, originally from East Bennington. “Out of 2,600 prisoners of war captured during the Battle of Fort Washington in November 1776, 1,900 would die in the following months at makeshift prisons. At least 17,500 are estimated to have perished under substandard conditions of such sugar houses and British prison ships over the course of the war, more than double that of casualties from battle.”

“When did it become the police station?” asks rookie cop George Carver Washington, Gaffer George as his fellow officers had started calling him after he accidentally shot himself in the arse last Thursday.

“Built in 1763 by William Rhinelander,” continues Ricky, “the sugar house was a five-story brick warehouse originally storing molasses and sugar next to his own residence. The old warehouse was replaced by the Rhinelander Building, which retained part of the original wall from 1892 to 1968, and received reports of ghostly prisoner sightings. The site is now occupied by the headquarters of the Gaston-Berry Police Department, near which one of the original barred windows was retained.”

“Fascinating,” coos young George. “And how about Utah?” 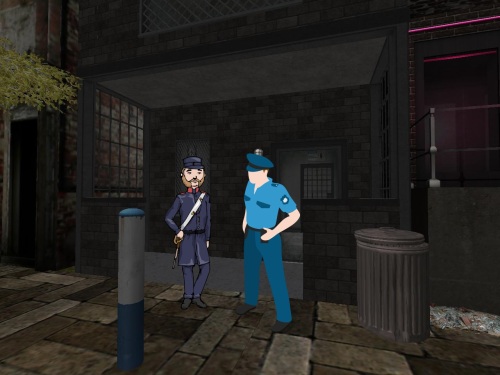 “Sugar House Prison, previously the Utah Territorial Penitentiary, was a prison in the Sugar House neighborhood of Salt Lake City founded by territorial governor Brigham Young in 1852. The 180-acre prison housed more than 400 inmates. It was closed in 1951 due to encroaching housing development, and all of its inmates were moved to the new Utah State Prison in Draper. The site is now occupied by the headquarters of the Gaston-Berry Police Department.”

George pauses, then: “And that’s where Hidden Village comes from?”

“And Greg Ogden and Gregg Oden?”

“You know you’ll have to return, Jeffrie Phillips.”

“Garson on the impossible stairs. Leading you nowhere like you were outside.”

“Art and crime together,” states a third.

There he is, Tiny Tina thinks. The miserable sod. Time to get him out of here before it’s too late.

Gregg looks down, spots her. “I’m Gregg Oden. I drink…”

“Yes, yes,” Tina interrupts, hands still on hips. “Is that all you have to wear out of here?”

“I have some watercolors. Would you like to see?”

“Can you *wear* watercolors out of here?” Tiny Tina chirps acidly, making Gregg pause. She blows out a minuscule puff of air. “This will have to do, then. Get up. No time to lose.”

“I’m Gregg Oden?” he says while rising off the jail bed.

“That remains to be determined. But we have to get you out of here. If they found out what you *really* were there would be tests after tests. And we don’t want that.”

She sprints across the floor and back to the open door of the cell. Gregg takes steps to follow. “You’ll have to move faster than that, Mr. Oden,” she shouts upwards and forwards while waiting. “Burt’s on a coffee break. He always takes a coffee break at 3:45am sharp. He always returns at 4:00am sharp. So *move*.”

“Too late,” Tina whispers as loud as she could, peering down from over the top of the stairs. “We’ll have to kill him.” 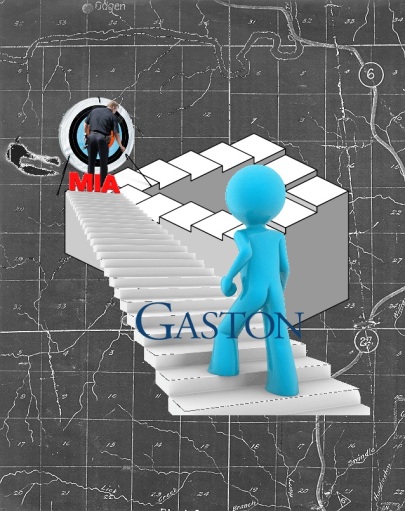