Dam and lake in Northfork movie subconsciously influenced (consciously?) by Norfolk Lake (or Lake Norfolk) in Baxter County, Arkansas, which flooded a hamlet called *Hand*. Check here for original blog information on this location, and connection with a “hand map” of same county. Queer indeed. Hand connected to 4H of heart, head, hand, health, all locations or former locations in Arkanasas. Indeed, just below Baxter County lies Hand Valley, which has variant name of Head Valley, combining 2 of 4 4H aspects. The hand map’s index finger is pointing directly to this anomaly.

Built on the North Fork River, Norfork Dam was one of the six largest concrete dams in the country at the time of its construction.

Clyde T. Ellis, who defeated Claude Fuller in 1938 to become the representative for the third district, envisioned a smaller Arkansas version of the Tennessee Valley Authority. Ellis made Norfork Dam his personal project and fought for it until construction began in the spring of 1941. Having won the election with the promise of cheap hydroelectricity, he hoped the dams would give rise to industry and lift the region out of the depths of depression.

The completion of the dam had an immediate effect; with freedom from the fear of floods many people began to reoccupy farms downstream of the dam. Ironically the areas most affected by seasonal flooding were those covered by the reservoir, and the dam had little effect on flooding of the White River. However, not everyone was happy with the construction of the dam, nearly four-hundred people had to be removed from one of the most heavily populated and prosperous regions of Baxter County to make room for the reservoir. The government only paid people for their land if they had structures on it. As a result many people did not get paid for their land when it was covered. In fact, one man who thought he had lake front property paid taxes on it until 2004 when he realized that his property was underwater (Andrewson).

The Hand Cemetery is located at Halls Chapel, 1/4 mile beyond Jordan
on the Jordan Landing road, which is Baxter County Road #64. The ACE
named it New Hand Cemtery in their files.

On Noseblood in Tile 10 (J), and also perhaps Mayor P’nisnose.

Noser Mill, MO (at nose like bend of Bourbeuse)

Blood (= present Bennington) there stands for kin, as in kinship between Edward(s) and Sam(sV.). Graysville obviously points this out. Black and Browns in same co. has connections to other map areas. Golden Gate? Bone Gap? Siegert?

Connect to Gerald and Chancellor in MO and sd respect. Then latter 2 connected to each other in AL.

In this White County, AR map looks like Happy lies direct west of Ellen. In Texas,Ellen is on *Happy Union* topo map, and 1 county down from Happy in Swisher County, which also contains Kress (see here on that connection). This points to gay marriage (swisher: derogatory term), and happy as synonym of gay.

Tea is obviously a gay character as well… flamboyant (like CKressley).

Only 1 Ursula in US, in Sebastian Co, AR (Ursula is name of waitress in tile 10). Already been connected to Ursula in Carrcass-8 through Doctor’s Creek just to its north.

But… Doctor’s Creek tributary above Ursula is called Doctor’s Fork, and a “Doctor Fork” is mentioned in Billf. (who will arrive soon with the antidote, or is it anecdote?). Doctor Fork is mentioned just as we see fishing lure behind sun visor in car (tile __). Also this looks like spoons, another utensil like forks. Fishing lure assoc. with Doctor Fork as creek or stream, perhaps. Doctor Fork may also then be assoc. with Dr. Who through Ursula. Of course Dr. Fork from audio is a link to North*fork* movie on the video side, akin to Bottom Feedlers (or Fiedlers) and Ursula’s mention of bottom feeders.

James Woods character has just stuck a fork in a piece of gray cake (signifying dam that will drown Northfork) before Dr. Fork and fishing gear are coupled in Billf. (same tile: ___).

Transcript of tile ___ from Billf. I’ve highlighted some keys phrases we have been talking about and will be talking about… 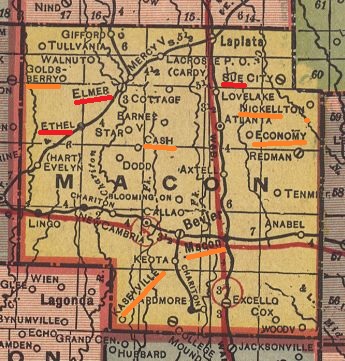 Speaking of which:P Diamonds Restaurant, also in Franklin County and known coast to coast according to ads. This is reference to Atlantic and Pacific, and Franklin County itself as microcosm of America herself. Proof?: Pacific town on east side of county, and Japan (Pacific on west for that country) on opposite side of county, just below aforementioned Tea, etc.

Pacific was laid out in 1852. It was so named because here the new railroad started for the Pacific Ocean.[7]

In 1903, a great fire arose in the middle of downtown and the entire city burned. The city has never fully recovered.

In Billf., we start out with Shine on You Crazy Diamond, Part 1 (Atlantic, probably) and end at SYD Part 2 (Pacific, most likely). In the middle of the synch we have Lucy in the Sky with Diamonds, combining the 2 and probably representing Great Lakes as whole. These 2 Diamonds, separated (quote Floyd here syaing the 2 parts were originally together, but split on opposite sides of WYWH album with songs between them).

Tile 10 of Billf. comes at approx 1/3rd point in sync, and at end of part 1 of 3. At end of this tile, we have the cuing of Division Bell to whole part 2 of 3 (throwback tile), but with important inserts. We’ve mentioned Lucy in the Sky with Diamonds in the middle of this tile. “Kanes” (evacuation committee) attempt to guess the 2nd and final Floyd album to be used in the sync, theoretically. Walter (J. Woods) succeeds, and the actual album then starts (get exact cue point). This begins tile 11, then. Ursula, after Walter’s successful guess (chicken broth): “Cup or bowl?”

Ashville in 7-10 years. Have plenty of time to prepare. I can’t really stop thinking about it. A new and entirely different thought flow is occurring, just above my head now. If I could raise up a bit more I’d be in its midst. I would see the correct relation between Blue Mtn. and Ashville, and also Abington, Aveberry, and Mythopolis.

We are ready now.

You can call us “The Bill”, please.

Are you from Ashville?

Yes. We are from Bill Creek. We are threatened. That’s why we reached out across time, space to snag you.

What is your relationship with Hucka D.?

We are his cousins.

Hmmm. This Frank and Herman Einstein blog will probably be wrapping up in about 2 to 2 1/2 years, making it about the same length as the Baker Blinker Blog preceding it. Then I’ll probably have a new blog until I retire. Then something new will come along to replace that, in turn.

*Are* you Firesign Theatre?

(pause) No, we are The Bill. The humor chip, as you’ve guessed, has been removed so that we can speak to you more logically about pressing or more important matters.

I need to declassify the next sync.

Yes. Most definitely. But be careful.

Do it on the blog?

Yes. Realize that the revelation about Illinois is created by us from the future. Spankey points to Kane. One spanks, and then one canes. Both are punishments, but of different extremes. The copyright has expired on Old Kane so we can make a new Kane. Bottom Fiedler Films put it out, yes. The Kanes in the accompanying movie are also called bottom feeders in the same [tile]. The audio and video become one, then. Young lookalikes named Kane… that’s the bottom feeders of the film, that’s the Bottom Fielder film. And “fiedler” is coded into the same location.

Let me check something. Thank you very much for this information.

That place in Illinois we’re talking about is a special spot. The presence of Principia College attests to this.

That was set up for us. As you’re also guessing, it is an art piece, a collage[ of sorts as well].

K is the 11th letter of the alphabet. J is the 10th, and we have Jersey County with its Jerseyville seat just below[ Greene County]. This relates to the Billfork Core Diagram.

We call that something else. But: yes.