The first pic in this post comes from Supersity over in Frank Park. There were a number of posts about this imaginary city-fort composed early on in the Frank and Herman Einstein blog, all from November and December 2012 as I’m now checking. Curious it hasn’t been mentioned here again since then. But anyway, now the 2 sets of rocks have a house polluting their top: no more possible Supersity re-creations or revelations. Compare with this earlier photo here. All we have are the legends of the place. The Sacred Hoop art work once adorning the top was a special site indeed.

We now move back to the general Bigfoot area with shots coming from a ridge separating Bigfoot from Rediscovery. Today I found an easier way to the top from the main path into Bigfoot. Excellent! It’s a short but still tough climb of about 150 feet. I found this baseball on the ridge. Due to its height, I believe the only way it could have gotten up here is if someone brought it. Although there’s an old baseball field below, one would have to had been a Herman Munster to knock it this far. So there’s clear evidence of human involvement with the ridge in the past. But I’m not sure anyone comes up here any longer. 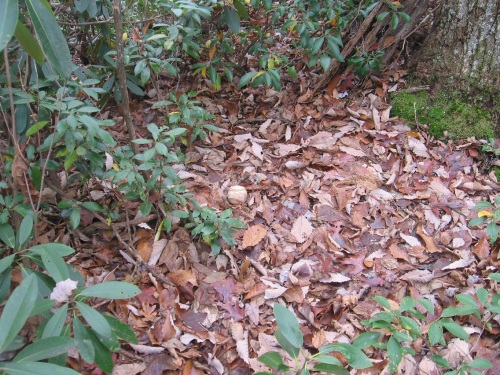 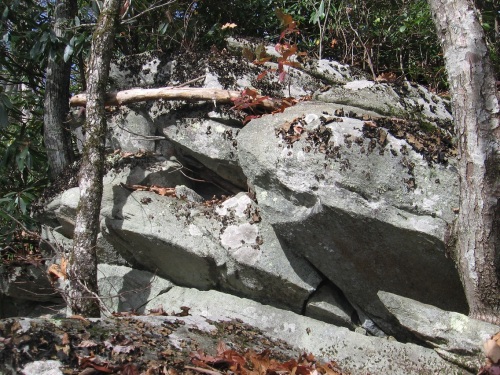 …with 2 of the biggest, if not the biggest, being one I call Razor’s Edge which we see the sharp namesake top of below…

… and another I call Flattop, which, in contrast to Razor’s Edge, has a nice flat top where one can sit and enjoy the view of the surrounding woods. Flattop is probably the most dramatic looking rock in the region, and is especially impressive coming up to it from below. 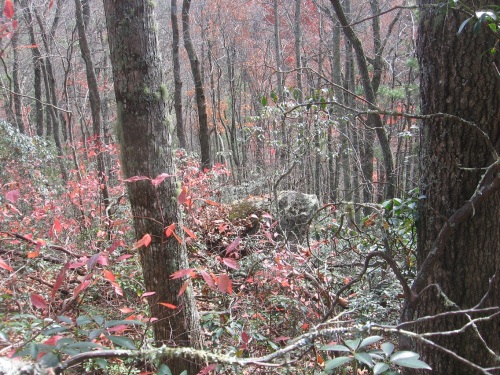 … emptying of the X-Spot Gallery will come soon, Hucka D.

I see you found “Imaginary Man”. I am.

We must approach the table soon. Can you see?

You saw me inside the 3333 circle. In the future. We will walk together more there. Beyond the Red 7.*

I like them because they help defuse the Beatles hoax… legend I mean (smiles).

Do you know the mystery of the Paul is Dead hoax?

The solution you mean? It’s within the Village Green.

* Knock is referencing my experience walking around the Supersity sacred hoop this past Sunday, interesting for certain. I’ve been dwelling on some work related stuff recently after hours, and not in an altogether good way. I was dwelling when I visited the hoop for instance. I decided to start chanting 2233 while walking clockwise just outside the rock circle of the hoop in an attempt to mute these chains of thoughts. I shortly got the impression that 2233 was opening up the past inside the hoop or circle. 2233 was the Baker Blinker Blog in the past now (this blog contains exactly 2233 posts), and through it, toward the center, I could see further into the past. In a way the central cairn is 1Pink, the largest carcass. So then I reversed my direction around the sacred hoop and instead chanted 3333. My impression is that this opened the future, in correspondence with me calling this place the Future City beforehand. The future is the Frank and Herman Einstein Blog beyond the Baker Blinker Blog, beyond the 2233. The circle of rocks represents at least the beginning posts of the blog, in line with the 80 post piece of art found nearby. The center of the *3333* circle is probably death or exit, but more than that — the totality of the soul in the 4 directions. It is the endpoint of the soul itself. So the past leads to condensing the energy of the totality into a microcosm, which is the Baker Blinker Blog; which is Second Life as well. 3333 is beyond the microcosm and into the Greater Whole. The circumference of rocks around the cairn is the *present*… I am in the Frank and Herman Einstein Blog now but it has just begun, really. The whole 2233-3333 walk reminded me of a figure 8, with the upper circle the past and the lower circle the future. But it’s also a kind of mobius figure 8 if so. You need both past (where you came from) and future (where you’re going), but it’s all viewed from the perspective of the present — where you are standing or walking or whatever *right now*.

The medicine wheel/sacred hoop located just above the Supersity rocks at the end of a dead end dirt road contains two main parts: a circumference marked by 51 “ground” rocks (some with additional rocks on top) and a central configuration (cairn) containing about 10 more rocks. I prefer the term sacred hoop for this set-up, as there are no “spokes” of sorts connecting inner and outer rocks. The crystalinks article on the Indian medicine wheel has this to say:

Medicine wheels were constructed by laying stones in a particular pattern on the ground. Most medicine wheels follow the basic pattern of having a center cairn of stones, and surrounding that would be an outer ring of stones, then there would be “spokes”, or lines of rocks, coming out the cairn.

Almost all medicine wheels would have at least two of the three elements mentioned above (the center cairn, the outer ring, and the spokes), but beyond that there were many variations on this basic design, and every wheel found has been unique and has had its own style and eccentricities.

In the case of our Supersity medicine wheel or sacred hoop, we also have each of the 4 cardinal directions on the outer circle — east, west, north and south — delinated or accented by rocks on top of rocks, ribbons, or, as in the case below, by a bird feather, perhaps an eagle’s feather.

Here we have the central cairn of stones containing a number of interesting items, including 3 conjoined ribbons colored red, green and blue — actually more of a magenta, cyan, and indigo respectively in looking at the picture again (hard to tell the exact hue because of the shadows, though). These are the same type of ribbons that we find amongst the outer rocks. 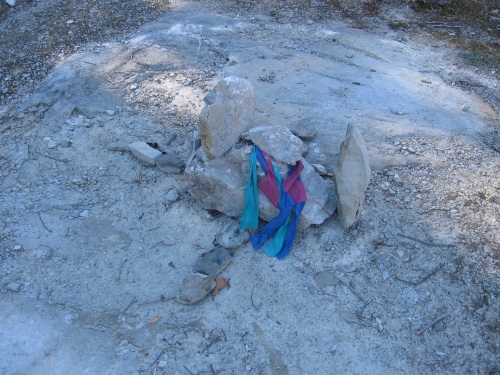 Zooming into the cairn reveals a niche next to the pinned ribbons harboring a US quarter with a Hawaiian seal on the reverse side (reverse side up), a pink cluster of crystals, exact nature unknown for now, and some partially burned plant incense, also of unknown type. It almost appears to be fungii (?)

Let’s move back to the circumference of rocks and the 4 marked directions. I don’t carry a compass while hiking, so I’m not sure what each direction would be — if they are aligned in this way. But we can certainly guess that these 4 cardinal directions are implied, for the markings follow the traditional coloring for medicine wheels, or white… 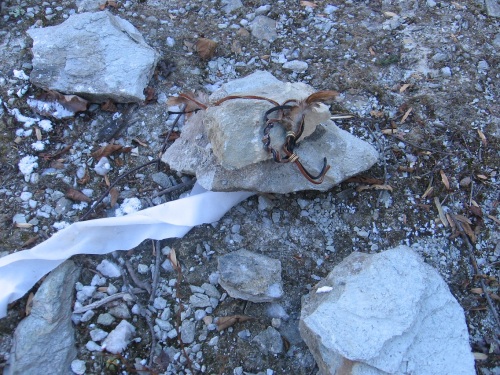 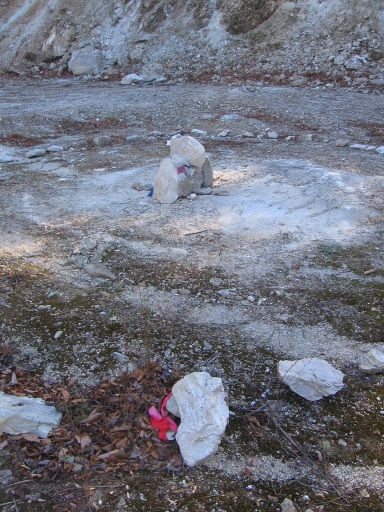 … and then this feather already pictured above substituting for a black ribbon, which we’ll talk about more below. And when I returned the following week, there was a yellow ribbon pinned by rocks marking the last cardinal direction, although I didn’t take a picture of it during this particular visit. It would lie on the far side of the circle in the picture below, or opposite the feather in the foreground pictured at the first of this post.

So compare here for the markings of a traditional medicine wheel.

The above picture of the Supersity sacred hoop would then correspond directly with the following arrangement of colors (which, although usually red, yellow, black and white, varied in exact placement in respect to each other):

Below we have some details of other rocks in the same area as the Supersity sacred hoop but not a part of the hoop itself. 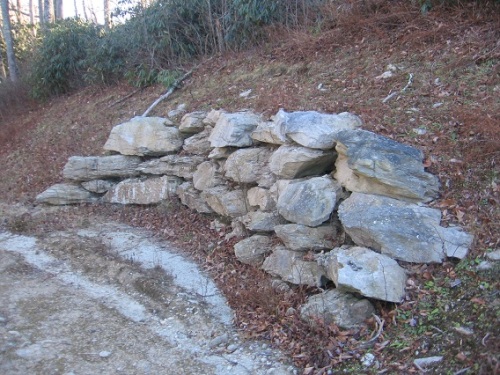 And now we return to the black ribbon, which as you can see by the picture below has either been placed outside the circumference of rocks for some purpose by its makers, or dislodged from an original placement within these rocks, which would logically be where the feather is on the near side of the circle (see 1st picture in this post). Interesting questions arise either way.

I would return to the Supersity Sacred Hoop both days of the following weekend so I’ll save more speculation of that amazing find for future posts (!).

It was a chilly but sunny day for Frank Park exploring.

“What a find!” I thought at the time. A Supersity indeed. It was rather large rocks below another (flat) platform area on a ridge I am fond of focusing on during my trips around Frank and Herman Parks this Fall. But just later on, I realized this was a “mere” substitute for what the Mossmen planned as an actual “super city”, building up from the location of a nearby old fort. 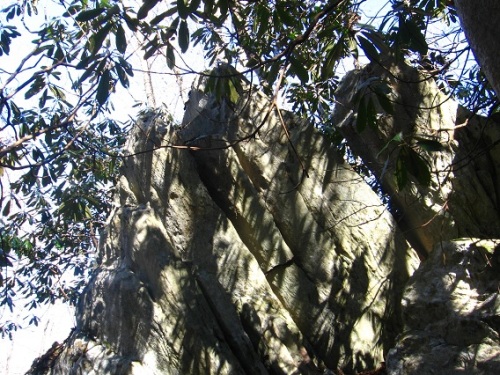 A gathering of white-ish rocks from the platform area mentioned above. I suppose you could classify this as another small rock art event, or part of one. 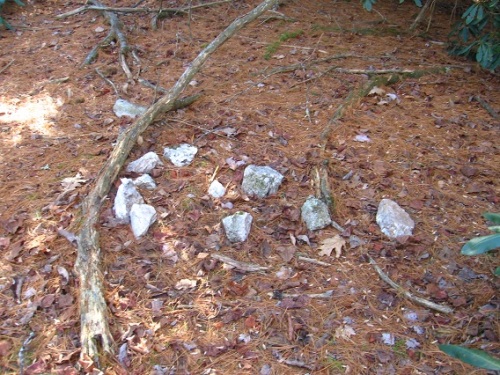 Hard to see from this photo, but the rocks pictured at the beginning of this post are dead center, and seemed to be aligned (yet more alignments!) with a type of path leading toward them starting from an opposite ridge.

But now we move into several photos from the *real* location of Supersity in all likelihood, and I promise to go back asap for more snapshots this weekend. This “X” marked on a rock drew my attention and I decided to chronicle its seeming oddity, which appears to be man-made. X marks the spot, after all..

There are two main groups of rocks in Supersity, the above shot coming from the higher of the two and the below picture that of a prominent jutting rock in the lower group. Supersity itself lies just beyond the northern boundary of Frank Park, and thus in unprotected regions, susceptible to future development. In several ways this reminds me of Mocksity from the Baker Blinker Blog, similarly in a rock cluster and lying just beyond the harboring areas of Frank Park, again to the north. And it’s rumoured that famed mossman Gene Fade was a resident of *both* burgs, which seems super important, blog-wise. Fade dwelt more in the lower part of Supersity, or in the cultural zone existing atop an extensive (to the toy avatars) fissure cave system. By this point in his life, Fade was a rather full blown artist, and here met fellow artisan Karoz Blogger, a faceter and also polisher of gems. 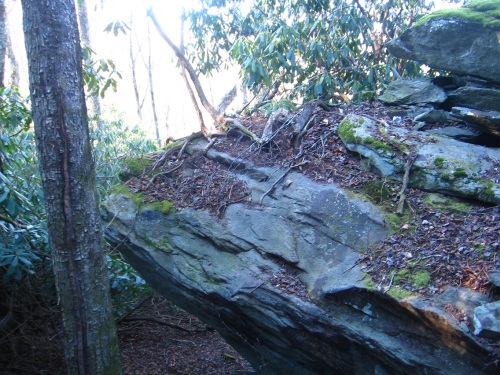 This is a Supersity fissure cave, but from the upper group of rocks, more a militant enclave. The rock this fissure is found is called Protector Rock by the people of Supersity, perhaps in step with the militia type it helps to shelter. Again, I’ll get more pictures asap. 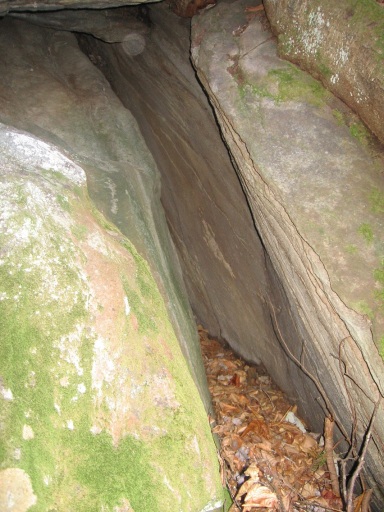 Little people certainly existed in this long passageway at some point, but my feeling is that they are toy avatars themselves, probably mossmen. So what that implies is there were 2 groups of mossmen forming Supersity as a whole, the artist types and the military or more rules governed types, the latter a carryover from the old fort days. But that’s not to say the upper rocks lacked culture; it’s just that wasn’t the primary focus, unlike the lower rock dwellers (like Karoz and Gene Fade).

And now we move to *Future City*. When I returned home, I discovered that what I shockingly found at the end of a dead end dirt road just above the Supersity rocks is called a sacred hoop, a variation of an Indian medicine wheel. Details of what this is can be found through links I’ve already provided in this post below.