“Reggie, get out of here! This is not your story.” The rat scurried away under the master’s bed.

“So… the king made sweet love to his dead queen one too many times and finally fell into her grave. The End.”

“Marvelous, Frank,” cooed mate Felicia Fox beside him. “Tell us another one. How about the Prince who ate a basketball and it became his head.”

“No, no,” insisted Sam Swan. “How about the Princess who made love to a living person and then turned into one herself.”

“Old news,” groused Cathy Cat. “The Great Queen is the story. How she got good and dead in the first place. Shape pullers.”

“What do you think, Cheeky?” asked Frank Fox to the so far silent chihuahua across from him.

“Dunno. Don’t care. Whatever.” Cheeky then rolled over and took a little snooze on his pillow.

“Shape pullers it is, then.” 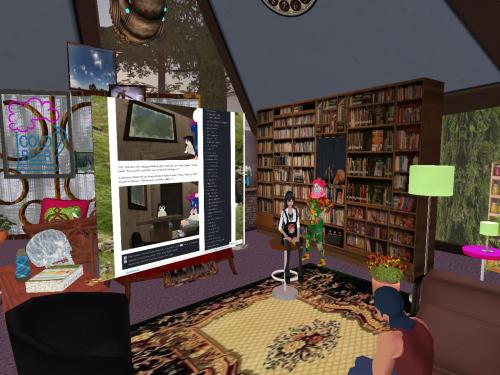 “They just sat there. In that shack. Daring me to approach with that blasted *poodle* in plain view. You know how I hate poodles. Such an ugly dog now with its hair all trimmed in the wrong places to make it… make it look like a demented toy.” On the stool, she crossed her legs and folded her arms while uttering a grunt of disgust, foot vibrating rapidly.

“Now, now Annie,” actor Tom Casey soothed from the couch. “I have something that I’m sure will cheer you right up. You’re always complaining about how I never gave you anything.”

“Well, you know I can’t do that right now love. But I got the next best thing for you. A *bug*. Right outside the door. I’ve been keeping it over at the club to surprise you.” He waved his hand toward the front of the house. “Let’s go look.”

“It’s got spider webs all over it,” she continued complaining, unimpressed with the auto parked outside. “And it’s orange; you know I hate orange.”

“Yeah, I’ve tried washing the webs off to no avail; they just keep coming back. I would assume the same with the paint. But you know what this means?” he asks, still unconcerned about her indifference. He knew it would spin around.

“No. It means you don’t have to sit at The Table and talk ‘Pumpkintwisters.’ There’s no way The Eye and The Cat can properly reach it now.

“I stole it right from under their nose. In the center of Collagesity.” His smiling white teeth contrasted sharply with his tan face now.

“Yes,” she said, face also beginning to beam. “Yes that *is* good news.” She threw her thin arms around the muscular Casey and planted a big, wet one on his cheek. She’d lost her ruby slippers and rainbow halo but at least she wouldn’t have to revert to being a Zappa groupie again, with all that old baggage resurfacing. Relief!

“Thank you,” she said, tears now running down her face and ruining her mascara. Still smiling too brightly, Tom Casey dramatically handed her his freshly laundered handkerchief with the 24 karat gold “TC” monogram.

Always aware of the camera, this one is.