“Hearts for you, Pansy,” said one of the Certain Deaths after dealing the card. All the rest dug spades; Grumpy never had a chance. 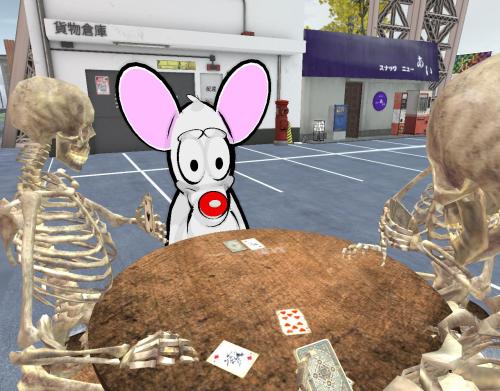 Drew “Grumpy” Cleveland had an idea how to lure the right Mouse over. “Corndogs!” he called while still protecting his valuable package behind the counter. “Corndogs for the pick’n!” Had Mick been successful with the operation? He might soon find out.

“I’m tired of being a Menace, Grandpa.”

“Grumpy, please,” insisted the octogenarian soaking beside him.

“Right. You’re sure they didn’t see me.”

“No one takes heed of me any more. I’m *ever-present* you could say. And I never do no talking. Being naked all the time has its advantages. No one takes you really seriously.”

Mick looked over, noted the substantial package Grumpy was obviously protecting from harm. Star in his days, he thought. Still thinks he can make a comeback in that industry; still able to keep it up for 20 or so minutes at a time. With aid from the red and blue pills. “I’ve chosen a disguise,” he says over to his one and only true, non-goofy friend in the world, now that the wife has passed away. But he doesn’t like to think about the farming accident with the tiger and the grenade down in Bellisaria. “The doctor has arranged it. He will be known later on as… the Doctor of Mouse, and then, maybe, perhaps, simply become Dr. Mouse. He will do it. He has assured me it will work.”

Grumpy Grandpa thinks back to the days when they were trying to talk him into an operation to change a body part. Too big, they exclaimed to him, catching him in the shower with it one day. Perhaps his mother, perhaps a brother — but word got around. Drew has a big package, everyone found out. The girls at the school started taking more notice of him, a lot more notice. The boys respectfully bowed their heads now when he was around, instead of taunting him with jeers about his weight and such. He had found his niche, even though he didn’t know it at the time. No more residing between a rock and a hard place.

Mick brought him out of the past. “They’ll start with the head; get rid of all the black. Just like Bendy: you know Bendy, the attendant up at the gate house.”

“No.” But Drew “Grumpy” Cleveland, aka Grandpa Cliffs, knew all about Bendy and what went right and also what went wrong with *that* operation. Disguises all around in this here Castle Town of Southern Omega.

On a break, Fern rolled the prophecy cubes and then wondered who Tessa was.

She better get back to her shift at the cafe…

“I wish I had better news about the twins,” Fern Stalin later exclaimed to Lichen Roosevelt at the Yalta Bar and Grill down more in the innards of Castle Town. Actually, where we saw Barry De Boy last, taking up pen and paper for the first time and setting down his palette and paintbrush. Actually: both; he’s both an artist and a writer. Just like me. We return to the present conversation…

“All in this spell book?” Lichen exclaims back, surprised at the results of the equation. Q, she thinks. Barry knew all along.

One of the twins walks in. I wish I could say it was the right one but I’m not sure.

“But I *saw* you there,” Tessa later insisted at the terminal cafe with the great view of Grandpa Cliffs. Devil Dave waves at Grandpa sitting at the far table and Grandpa waves back, realizing he was exposing too much while locking his knees.

Devil Dave returns his attention to the just arrived girl. “No, Tessa. That was a doppleganger. I have experienced much the same thing here. Our Second Lyfe is breaking down… *has* broken down. The only thing holding us together right now is Collagesity. So we must *choose*, young lady. The waffle house could have manifested in Collagesity but it didn’t because you were led back to Fryburg and the missing junk ship which you had already taken to Castle Town: here. Someone is following in the green one left behind.”

“*That* old piece of crap?” she exclaimed while shaking her head. “They’ll never get it off the ground and in the air. I *tried*.”

“Nevertheless, that is another doppleganger, a ship in this case.”

Fern arrived with their food. Yet another one.

“I was younger back then, still a rocker, still a moder. Cleveland had nothing on me.”

“Yes,” Stefan [last name still to be determined] admitted, thinking back to the lake, the peninsula. So calming after the pansies. He knew who he was… for the very first time. Then a Brendan appeared on a nearby peak and it began in earnest. He understood that this was not a bucolic paradise, and that paradise was a long way off indeed, like his sister knew before him. Brother too.

“Soooo…” Baker caught his breath again. “That’s when you began (inhale) to know… about Pansy…”

“Mouse,” Stefan completed for Baker Bloch. He held all the cards now, was playing with a full set of dice. Die — Certain Death. Red equals white. Alice in Wonderland would be proud. He let the word hang in the air again, like a kite cut loose from its tether, adrift in a sea of nothingness.

It was kind of irritating how he never wore clothes in the hot tub but octogenarian Drew “Grumpy” Cleveland had information I needed to complete my school project. Pansy Mouse! The mouse history has forgotten. Perhaps I shouldn’t even be writing about it (!). Keep it to myself for later.