“Well, might as well man up and say we don’t have a finish for the Regaltown section yet, Baker Bloch,” Space Ghost speaks to his son playing the role of Bullfrog here. “Just twiddling our thumbs, waiting for lines.”

“It’s the Horns of Hatton, dad,” his son tries to defend. “So laggy over there; it’s holding us down, impeding our progress forward.”

“If everyone blamed everything on *horns*,” Space Ghost replies firmly (presently voiced by the great Gary Owens!).

“White,” and here Space Ghost reveals the whites of his teeth. “Elephant,” he then completes crisply, making the teeth actually glint with an accompanying, tingy sound effect.

Just like that they’re somewhere else. Still on the same porch, but — at Horns instead of Regaltown. 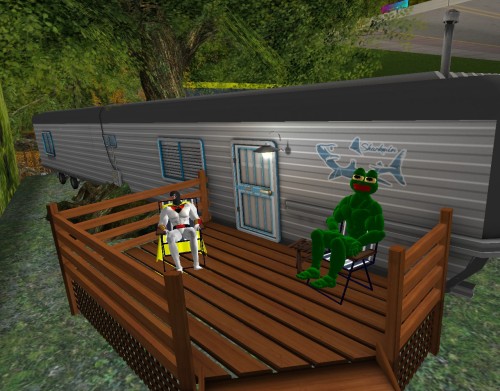 “See how easy that was, son? You still have a lot to learn from your old man.” 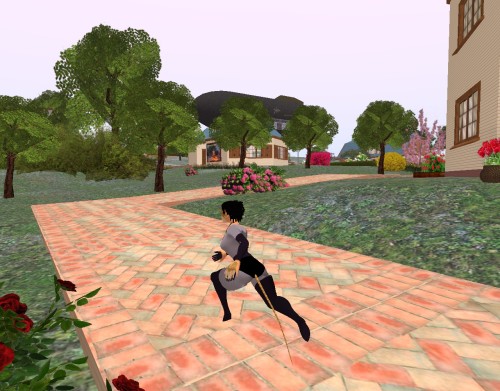 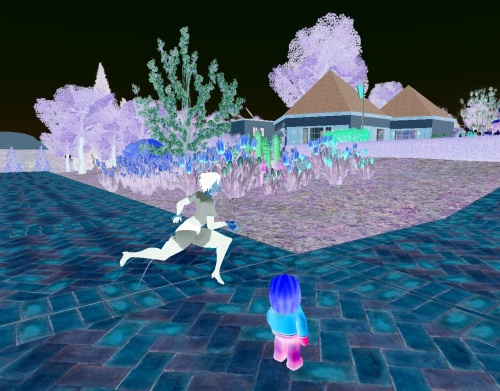 “Where’s Chicken Guy today!?” he shouted in return, but Chesteria had already run out of earshot. So fast. Cheetah fast, of course, since she was 1/2.

Watch out for that fountain, Speedy Gonzales! But she was nimble as well as fast. Best of both worlds.

The cows wouldn’t recognize her if she stood still. Always a blur to them.

Then something suddenly made her STOP. A running plane at the airport on the west side of town — new one. Circle within circle design on the wings. It somehow rang a bell. Like a cow. 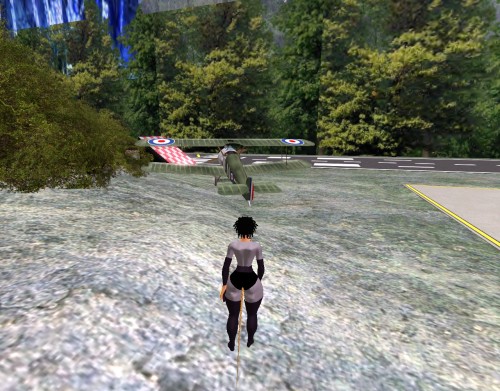 “Help!” shouted the occupant, a lone flyer. But now: no fly. He had landed in Regaltown and he wasn’t gay, so the scripts didn’t work here. “Help!” he repeated, unable to even separate himself from the cockpit.

Keith B. 1/2 of the non-gay team called The Basterds. He suddenly found himself 20 years younger. Maybe 40 after the glasses also disappeared. Grammy’s vortex powers were still in effect for the area, eating up the decades in pairs. 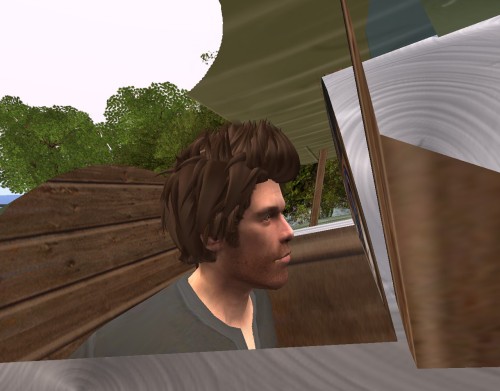 “Have you rested enough, love?”

“I’ll have you know I tried out for track in college.” Her eyes widened. “Failed miserably, admittedly, but I tried. It was all those coconut cream pies they offered in the cafeteria. So tempting.”

“And all the cigs, I’ve heard,” responded Chesteria A. Arthur with a chuckle. “And some of those *special* cigs you like.”

“Well… maybe.” Grey Scale’s thoughts turned to ambition again, as they often do. How long to stay in this backwater village. Who’s here besides them, Marcus and Chicken Boy next door, Bullfrog and Aqua Dude, and then, let’s see, the Kevins I suppose. Kevin C. and E. at least. Kevin A. lives in the separated Northeast Quadrant on Space Ghost’s property. Non-gay they are. “Didn’t the guy with the archery set and his gal pal leave the village recently?” she asked her non-winded partner. “Something about converting back to straight?”

“I’m not sure,” Chesteria said. “Okay, enough dilly dallying. It’s time to see what you’re made of, dictator girl. Then she was up and running, so fast that she was around the bend up the hill almost before Grey Scale could turn around. This would not work out well, she knew. Better just head back to the house; pull out one of the special cigs; wait for her return. She’ll understand… she didn’t want me tagging along anyway. I’ll smoke my cig and plot world domination again. I have my eye on Horns. 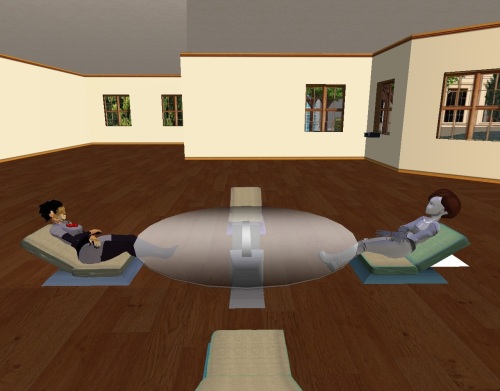 “We’ll have friends here, love. Already you are jogging with that Chicken man. Lover of Marcus Fox Smartville I assume. Since they live together next door.”

“Correct.” Chesteria A. Arthur tried to make her tone as flat as possible. Grey Scale Kimball still stared at her, but she was only thinking of a next topic. She suspected something, but it didn’t cross her mind right this second.

“And I’ll get my furniture shipped in as soon as possible. Just wanted to see if I — I mean, we liked it well enough to go to all that trouble.”

But I can’t help notice,” she continued in a somewhat different tone, “that one stays on the island all the time while the other roams about freely. Wonder why?”

Grey Scale Kimball stares again, this time thinking about Chicken Itza and Marcus Fox Smartville directly. True to s Arnold’s worries, she called a council meeting the very next day to discuss the possibility. The Kevins’ stood up for the ersatz couple, though. Good thinking Arnold! 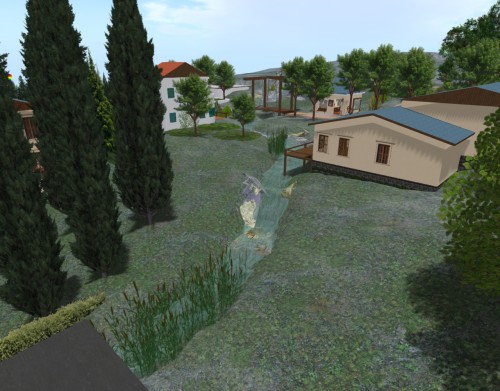 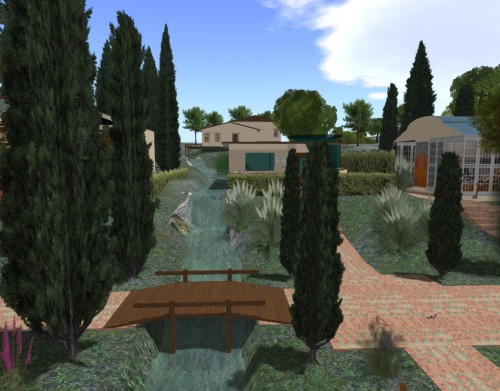 Arnold had brought them here to this chicken laden place to sit just outside. He wanted them to be witnesses in case Grey Scale Kimball launched a full, um, scale investigation of the two.

“That’s very good, Kevin E.” Kevin C. pats his knee this time. “Remember the word ‘appli-cation’ from yesterday? There were 3 squiggly letters — 1, 2, 3. Then you said the next letter, a straight one. What number would *that* be in word.” 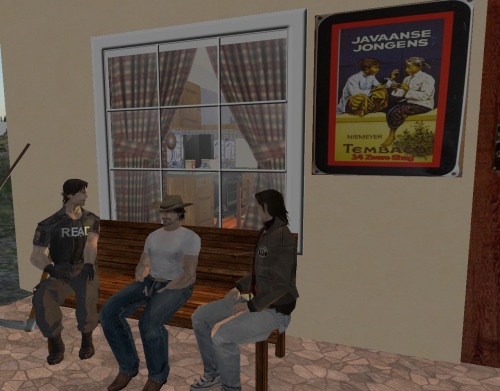 “Shh, guys,” spoke up Kevin A. — as stated before, the smartest of the group. Or least dumb I suppose I could put it more accurately. But that’s not really fair to them. They’re all sweet as can be. Especially C. and *especially* especially E. Sweetgrass sweet for those two. Kevin A. didn’t quite make the cut and had to remain straight. He is just outside looking in. Outside with Space Ghost at the Northeast Quadrant that’s filled out nicely in the meantime. “I hear someone coming,” he continued after listening a bit more. He was just outside looking in again. But the big dining table hid the supposed action.

Kevin C. looked up and down the road running beside Bridgeman’s but saw nothing. Kevin E. followed his eyes and then looked himself, a copycat act. He was often in copy mode. Kevin C. then realized what Kevin A. was talking about.

If that moaning would stop inside, Kevin E. thought,  maybe I could concentrate on the road and see what Kevin A. was talking about. He peered further down the road right — direction 1 he decided to call it to keep organized in the moment, as Kevin C. had taught him recently. He studied the old Archer place from a distance; could almost see that blue band or whatever playing at the dance pad over there. 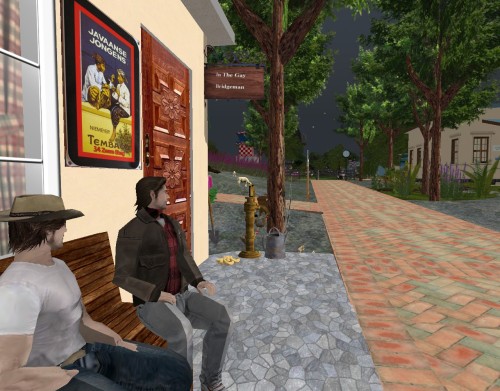 Still no sign of someone coming. The moaning accelerated inside, reaching a climactic point just as Kevin E. uncharacteristically shouted “Shut up!” to them, “I can’t think with all that going on.”

Chicken Itza and Marcus walked out of Bridgeman’s, looked at the Kevins lined up in a row outside, and feigned turning red. “Eh heh,” laughed Marcus nervously. “Er, just some bad chicken. We *ate* some bad chicken.”

“Yeah, *bad* bad,” accented Chicken Itza beside him. Bad as in *good*, he thought to himself as part of the cover up.

Kevin E. realized what Kevin A. was talking about.

He was down at the frog pond feeding the ducks when he spotted her through the bamboo. “What the??…” 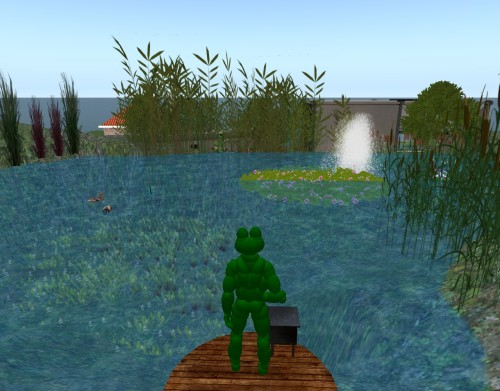 And he moved forward through the water to investigate, striding the bottom to the far edge. Space Ghost’s edge.

“That’s *it*. I’ve had it with these shenanigans by interlopers like this Space Ghost, this new guy Kevin A. This is *not* funny.”

“Space Ghost, I know you’re in there.” No answer. “Space Ghost!” he belched out in his gribbety voice. “Open the door. We need to talk.” 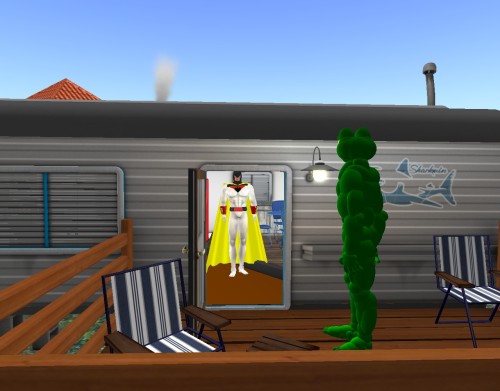 “Bullfrog?” the superhero at the peak of his powers replied innocently. Bait taken.

“Yeah,” responds the other Kevin at the registration table. “If only — we could read like him.”

“We’ll have to fake it,” answered the somewhat smarter Kevin C. to Kevin E. after glancing back over his shoulder at Baker Bloch (a.k.a. Arnold). “Uh, you take the straight letters and I’ll take the squiggly ones.”

“Uh. Yeah.” He spots his first one. “‘L’,” he mouths, jabbing the appropriate letter several times with his finger. “That’s definitely an ‘L’.”

“Very good.” He pats his hatted lover on the back.

“We’re going to have to make a decision, Wanda. Are we gay? Or aren’t we gay?”

“Well — *my* old lover is a psychopathic killer. Enough to turn a woman against gaydom. And *yours*…”

“Marcus, I know,” spoke Pete Archer, a Sagittarius through and through. Big Wanda? Aries of course. Horns of Hatton.

She looks downhill into the heart of the village, shifts her sturdy weight in her chair. “Well. One things for sure is that I’m not going to take orders from that Grey Scale woman who recently came in and just took over the place. Freed *Annie* for Pete’s sake.” She then looked blankly at Pete. “Sorry — I-I know you don’t like expressions using your name.”

“That was a long time ago, Big Wanda.” He flipped his hand. “Forget about it.”

“I’m sorry your mother never let you go to school. All the advantages lost–”

“I said forget about it.” There was finality in his voice now. Pete had forgiven his ma, his pa, his bro, his ho sis who joined the 1st Prostitutian Church of the Deep South when she was only 15. But now a woman of 30 and straight in her ways. Except she was gay as well. Was *he* gay? Maybe Big Wanda and he should do the big dirty again. Test all those different kind of moves out once more. But he could just be bisexual — no harm in that. Except it is frowned upon by the community here. He’s either in — or out. Can’t flip both ways.

“Let’s head to the Deep South again,” he offered. “Love Letters in the Sand.”

A big smile spread across Big Wanda’s face. Maybe they won’t have to stay here after all.