Although separated now, she often dreams of him still, and sometimes she *is* him in the dream, like here. He (she) exits the rundown house where he’s lived for going on 25 years, intending to go to the library but then realizing he doesn’t have a key any longer. He doesn’t work there no more. A dove flies overhead and something lands in his beautiful purple hair, making it imperfect. Thinking the dove pooped on him, he curses it as it wings its way back over the plain whence he or she came. 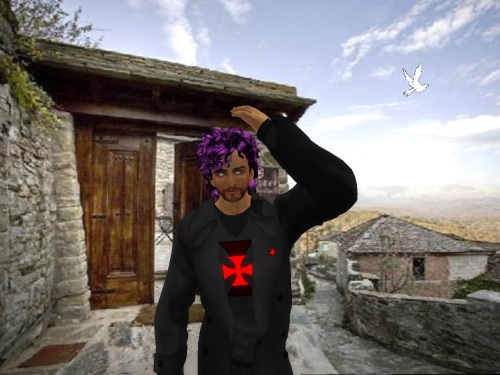 He turns around, intending to wash his hair out in the sink or, better yet, take another shower, then apply more gel and finisher. He steps into the shower after removing his clothes. He’s still taller, darker, and, yes, more withdrawn. But he’s about to change that, about to wash away his “sins”. The water comes on. He washes his tall, dark body. He wishes Debbie were still around, wishes he could invite her over to join him. He imagines them together in his head as he continues to suds. Body done now; hair next. The water moves to the head. He rinses it well before applying shampoo, and, finally, touching it for the first time since the dove incident. His fingers start to move around his scalp. Something oddly shaped and metallic is quickly encountered. He withdraws it from his curls, looks down at the open hand. 319. This is the gift of the dove. This is the gift of the *library*. He doesn’t need to head there any longer.

The house seemed empty. But it had a portal room.

In the thin woods eyes were watching. 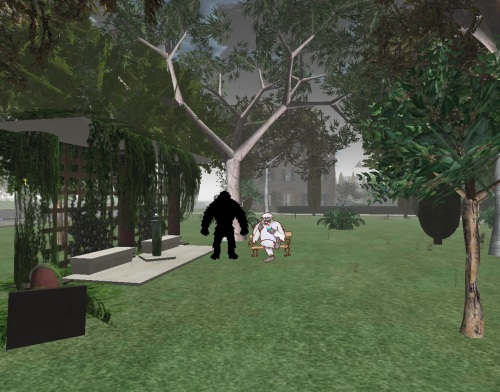 We should walk back to GASTON. 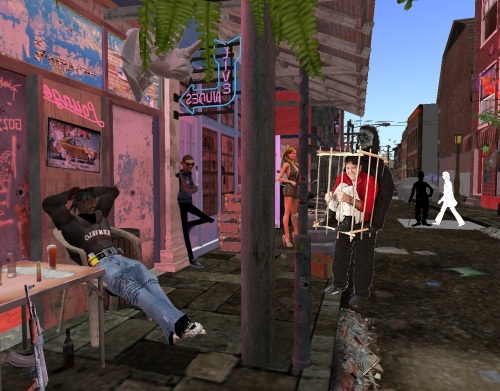 He cracks a window and then cracks another to stare out at the linden woods bordering this place. Samantha’s Place. He knew this silhouette of a woman with the dangerous curves came between the private dick in the trench coat — the real gravitas behind surface, buffoonish Wendell “Biff” Carter — and the owner of the magic shop over in Colona with the green geode that Jeffrie Phillips took back to Teepot to “mate” with his smaller pink one to complete the circle and symbolically unite the twinned cities. That’s why the former didn’t want to talk about the later, despite 2 requests to do so in case the first was missed. It was a dame, in retro-speak.

Samantha was also the same as New Nun, a disguise that perhaps she forgot she was wearing, like a mask. New Nun knows. Rhodes > Roads.

The Colona man formerly had a herb shop over in Cassandra City. The private, trench coated investigator now has his office *in this very spot*. He’s trying to complete a triangle, just like the A.Team did in this very same town before him. Scarlet Triangle. It was all there in black and blue. Somewhere.

The Man About Time raised himself up from the ground. The portal looked bigger from the outside

Typical. There would be no safe passage to the Amazon this night, but he knew that was death anyway. Speaking of which… 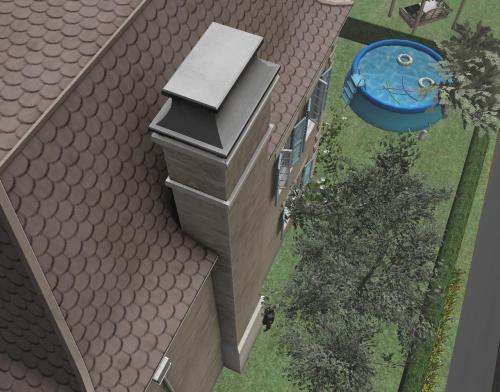 Just later the Man About Time deduced it also had something to do with this chimney, a Big Chimney indeed. He would have to take it apart brick by brick soon to find out what makes it tick. Clock? Bomb? (another one?)

“So tell me about this Colona,” he requested mildly a bit more later to the man with the orange firebird burning in front of the hearth fire. “I know that Teepot use to be the twin city of Pietmond, long since destroyed, but now it seems to be this one.” He stared at the green geode on the mantlepiece, knowing Jeffrie Phillips hadn’t arrived yet. He should be due any moment. Or any century.

“Different,” uttered the man opposite him in a deeper, less mild voice. “Somewhat,” he amended. “Reason,” he spoke about the overlap, meaning there was a reason for it. “Absorption — *assimilation*.” MAT knew that New Nun had also been assimilated. 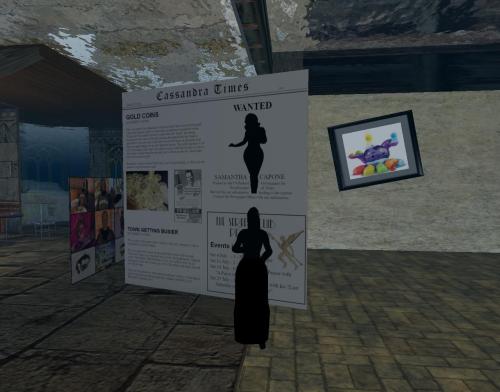 “Could be that the next photo-novel will be all about (the) Nautilus (continent), Hucka Doobie.”

“Good. That is fine.” She pauses. “Speaking of which, we need to get over to Rooster’s Peninsula and wake up Jacob I. He’s due for a return as well.”

So they traveled about as far across the continent as you can get until they reached the Progressive Rock Museum at the neck of Rooster’s Peninsula, so named because a dude named Rooster once lived there in a giant castle called Rust Never Sleeps, enigmatically enough. Rumor has it he was part of the Lemon Conspiracy against the Blimey Linden overlords. Nautilus was riddled with ’em. But much of their work and their ways has already gone the path of the dodo. The Prog Rock Museum keeps on progging, thankfully. It’s the way we can bring Jacob I. back and get more of his story — why he came to Collagesity in the first place. 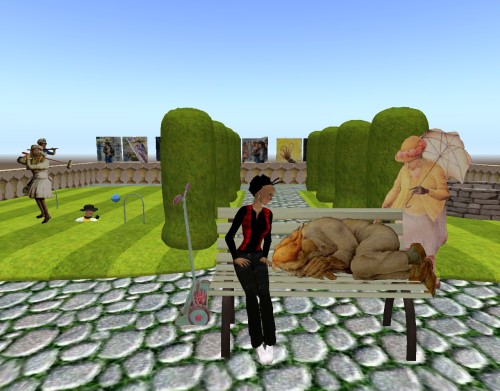 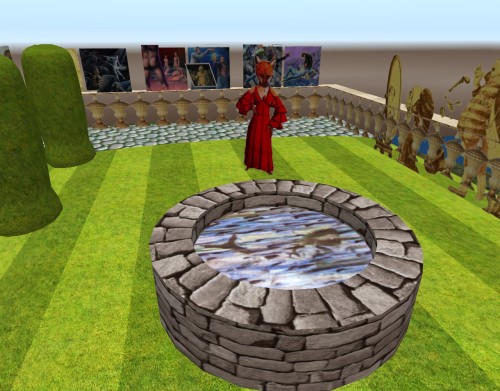 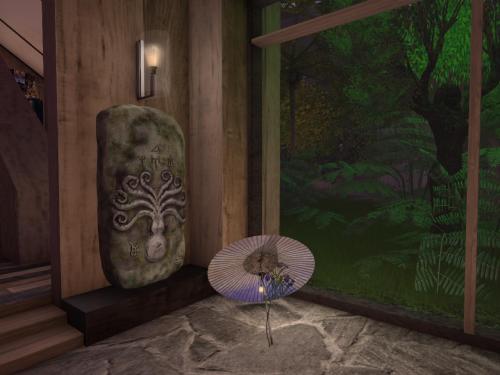 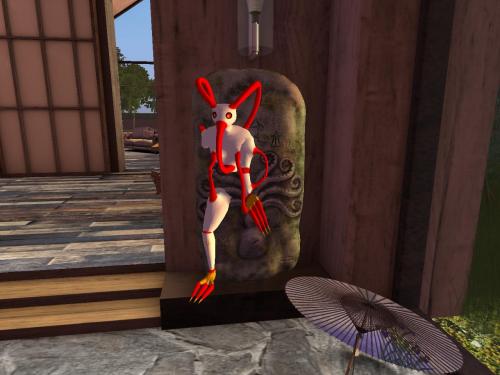 “They’ve been out there a long time, Golden Joe. I wonder if the deal will go through?”

“Have you ever thought about traveling to the center of the sun, Marion,” she deviated in her deep, metallic voice. “It’s actually quite nice.”

“I remember Philip mentioning that concept once. Philip something.” 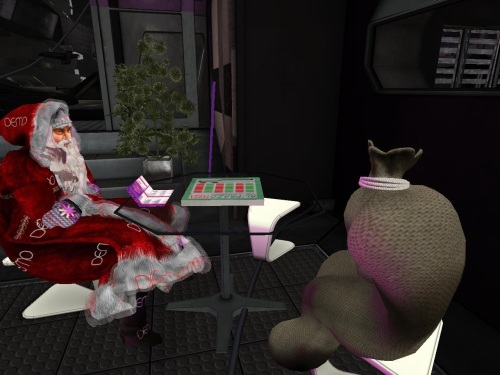 “Alright, I won’t split hairs any more, Cooper. We’re both tired; 50,000 lindens it is. Now spill your contents on the table here and let’s count it out.” 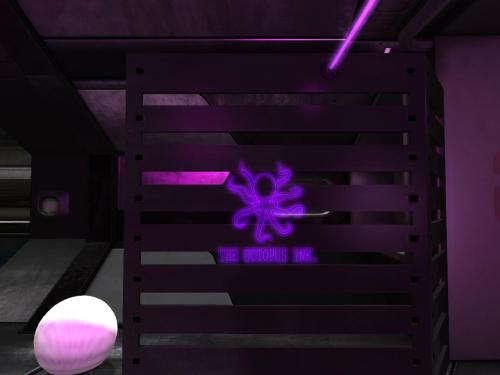 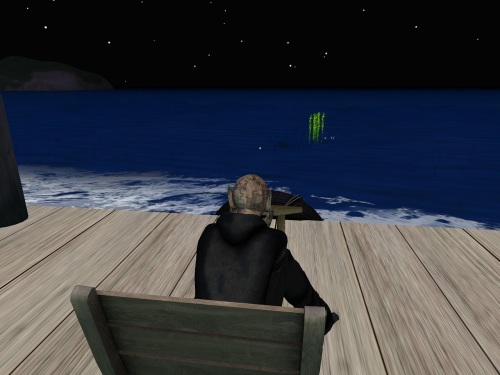 Roger Pine Ridge kept looking at the flickering white glow beneath the water that he knew was Anton. Shoes stolen; mission accomplished. Like finding the ruby slippers of Oz, he thought. Anorexia’s gonna be pissed off as hell.

He looked over at the green robed woman beside him, face harshly illuminated by the glare of the flashlight she held. Scars. “I’m just waiting for the significant other to finish up inside,” he explained from his chair. “How about you?” 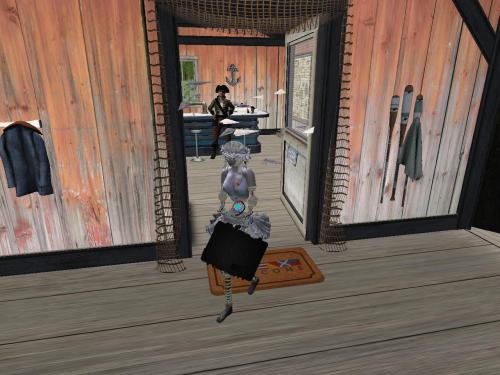 Cyberpaperdoll walks out of Fae’s Boat House with 50,000 lindens in hand.

“Come on, Biker,” she said just above a whisper toward the closest Pine Ridge chair. “Time to go.”

“Don’t forgot to sign the guestbook out there!” Jim the Pirate Bartender called from within, a request they most definitely ignored while leaving. 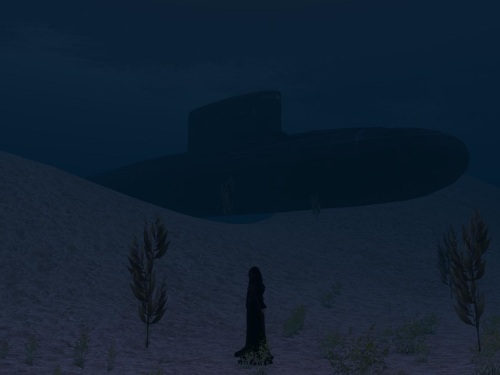 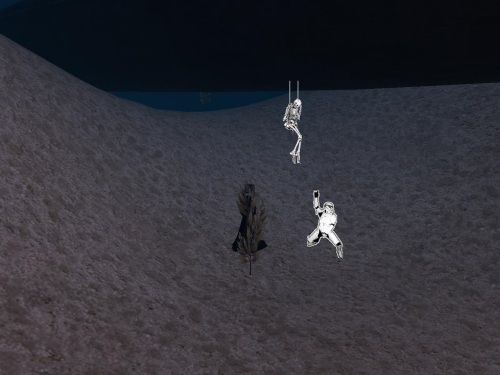 the evolution of the ring

“I’m just waiting for the significant other to finish up inside,” spoke Roger Pine Ridge from his *self named* chair. “How about you?”

But metallic green robed Junbug said nothing and kept reading her book of spooky stories. There were codes inside. 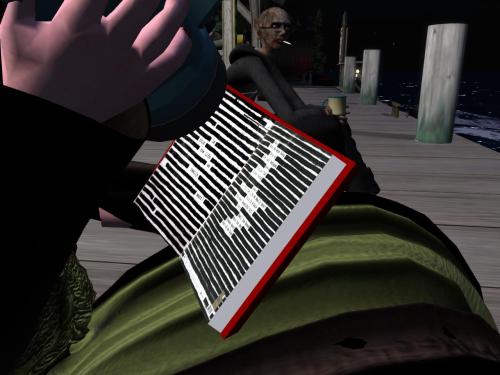 “I’m glad the Floyd Man is gone, Owlshead, because my book is now not full of glitches.” 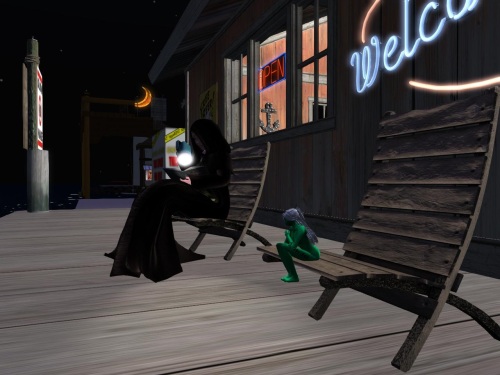 “Do you have *any* clothes around here that’ll fit me?” the small green being now seated opposite her replied, “because I’m f-ing cold as old mold, *shiver*.”

“Okay,” Junbug relented. “Hop on back up and let’s go see how Anton is holding out. This was just a test anyway.”

“Well? How’d it go?” asked Jim the Pirate Bartender about Marion’s exploration of Anson. He was nosey that way. Regular customers usually liked it. Strangers sometimes put off. Like Marion Harding. But he relented, wanting to abate rumors while telling the real, *checkable* facts as much as possible.

“Nothing much there except a hull,” he tested. “No autos within now for certain.”

“We *know* that, Mr. Hardware,” Jim said, speaking for the bar collective he felt he presently represented.

“Harding,” Marion corrected about his name.

“What about Anton? What’s he look like these days? Use to come in here you know. Alternated between a bloody bucket of nails and a naily bucket of blood. Rough drinks both. Usually dove back into the sea pretty wasted. Surprised he didn’t actually drown he was so sloshed.”

“You know that’s impossible,” Marion corrected again. “You know we can all breathe under the water. Above the atmosphere, under the water. Survive fire and flood — although there is that rumor about a volcano on the Old Continent where avatars could actually perish.”

“But look at your friend Stinky Brinkman you spoke about earlier. Riddled with bullet holes. You said you were there at the funeral and another gunfight erupted, with three more dead. Then at *their* funerals nine more dead. What was the total at the end?”

“138,” replies Marion in a level tone. “138 avatars killed so far. Chain reaction, yeah.” He shook his head, thinking about Stinky more than any of the others. “But they aren’t really dead, see. The *core* remains to rise another day. Actually,” he then reconsidered, “there is another way to truly die. You can deactivate yourself — obliterate the core. I’ve been told it’s possible but I’ve never known anyone to actually do it. The problem might be: when you deactivate yourself that way you rub yourself out of existence, so no one remembers anything about you, past or present. It’s as if you never existed in the first place. Working theory mind you.” He took another sip of his Brewmeister’s Quarterly, still being careful not to drink too much. Because that’s when he gets in trouble with the revealing.

“Well I never,” Jim replied, wanting to get back to Anton. He wiped the counter in front of him a bit and collected his thoughts again. “I’ve heard he’s only a beard these days. Anton, I mean.”

Close, Marion thinks. But then utters: “I didn’t see him. No autos, no Anton.”

“Impossible,” returns Jim. “There’s a green dot on the map up there. It’s usually there. It’s gotta be Anton. We’ve had ships pass over the wreck and examined their NAR (Nearby Avatars Radar). Anton: usually the culprit. In fact — let me check my own map right now (Jim’s face went blank for a moment) — well he’s not there now, but *usually* is. Sometimes, anyway.

A cyberwoman walks into the bar and settles into a stool two down from Marion, paper airplanes whirling ’round and ’round her head. Spy? he considers. Jim keeps talking about Anton. Marion wishes he would really shut his yapper now.

“Maybe he’s totally invisible. He use to be whole, like when he came in here. But then there were reports of just a beard and a coat, just a hat and some pants. Maybe he really is gone, man. Dead even.”

“Is this Anton a boy of about 10 years old,” Cyberpaperdoll then inserted.

“Well, never mind, then. Paper plane cocktail if you will.”

Shoes buried in the sand — uncovered. And the left one holding something small and green and almost priceless he soon found out. About $500,000 lindens worth of almost priceless. Enough to leave Second Lyfe altogether if he wished. But, truth be told, he only wanted to get back to that ice fishing shack over in Horizons-Spica. He dreamed about it almost every night.

“I’m afraid we have no power to control the theft of the haunted VW, town owner Baker Bloch,” responds Keat Owens Librarian beside the marked up Nautilus City map. “The Oracle has spoken; it will continue to be X-ed out.” 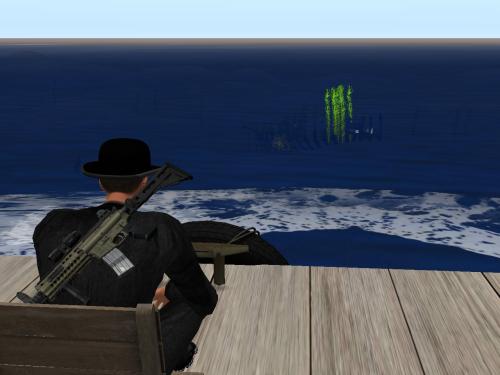