Those black, white (yellow) and red ladies said I didn’t have to stay here that long and that’s probably a good thing. A little too grown up here, in that things are too *big* for me… like this chair. Can hardly see over the edge of the table!

But those flowers are nice in front of me, although they make me do weird things when “touched,” like touch my toes — touch for touch. Maybe I don’t want to touch my toes, I say back. And then they quickly relent — they always do — returning me to my sitting position in the chair. Strange also that they don’t have a vase.

And certainly the *butterflies* all around are a perk-me-up in these dark dark times. I lost Carolin! I lost Mabel and now I’ve lost my next best friend, the one that remained behind and helped me through the first dark times. Robert! she remembered. I totally forgot about Mabel’s lime green robot stored away after her — not *demise*: disappearance. Carolin said he would be too hard to take care of now that Mabel is gone, thus the dismantling, the storage. But, oh Robert, I *do* need you now. You were the third best friend, after second, Carolin, and first, Mabel. But do I want to put you in the same jeopardy that they, unbeknownst to me, were in — just by association? How hard would it be to put him back together? Carolin said: near impossible, when she brought it up every now and then, especially when she remembered the most times small sometimes not as small difference between a second best friend (Carolin) and a first (Mabel). Third could help fill the gap and more. Why *not* try now — what’s to lose (except a 3rd best friend)? So when the black, white (yellow) and red ladies come back I’ll tell them. Maybe they can help with the reactivation, come to think of it. They do seem to feel genuinely sorry for my plight — kicked out of Green Yarn, a thought of *new* home, and then turning into a wanderer again, first at the End of Time caves like before, and then — kicked out again. The black, white (yellow) and red swooped down in their spaceship: set down the cow they had in their tractor beam and latched onto me instead; brought me up in their ship. I wasn’t scared, strangely, like I was use to it. I had nothing to lose. They offered me — hope.

Thus the stay in the treehouse. “You’ll be safe here — for a time,” they collectively said before whisking away back into space.

Back in her own camping spot in the caves, just up the tracks from Carolin’s, Tessa was reading a biography of 19th Century German composer Robert Schumann before turning in, and had reached the part where the author was discussing his first major work called “Papillons”, which means butterflies. Tessa recalls the dream again with the snow-as-butterflies, her *last* at Green Yarn, pheh. Kicked out! Just because Jeffrie Phillips slept too long in the 1898 room with his safe, comforting tv static. “This is not a homeless shelter!” she could hear the owner or owners of the sim say upon seeing him in bed. “Banned! And the girl with you.” Another biographer I am, she thinks here. The story of the Blue Rose Thorn.

Oh well, Tessa considers. It’s not too awfully bad in the caves if you have some good books to read to pass the time. And good friends — like Carolin. Too bad about Mabel. Tessa tries not to think back to that awful day in early May when… but she couldn’t help herself. Let them eat cake: she’ll never forget. Mabel saw the passageway and she didn’t. Then: gone. Darn heartless dummies!

Tessa wakes up at 2:01 am with an epiphany. “Q”, she whispers, open Schumann book still in hand. “Curly Q. The island down the tracks!” She couldn’t wait to tell Carolin; morning was too late.

Groggy Carolin didn’t think much of the idea at first but when checking Santa’s list on the blackboard the next day came to understand the significance of it all. We’re going back to New York, she thinks while packing her knapsack for the journey. I’m going… home. 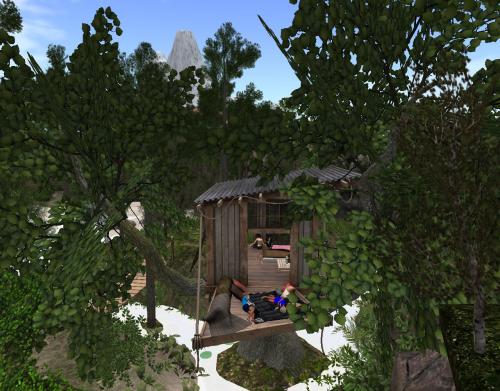 “We’ll have to stay in the caves tonight, Tessa. They’re having some kind of party over on Crow Island in the treehouse.”

“But… I need a new home! I’ve been kicked out of Heaven!”

“That wasn’t heaven, that Green Yarn. Change the name, change the attitude. They don’t deserve you.”

“I’m *not* staying in these caves again. Cold!” Tessa shivers here exagerratedly in her sleeveless shirt.

“It’s not forever.” Carolin stares down the tracks, wishing she saw a ballerina figure instead of a heartless dummy. 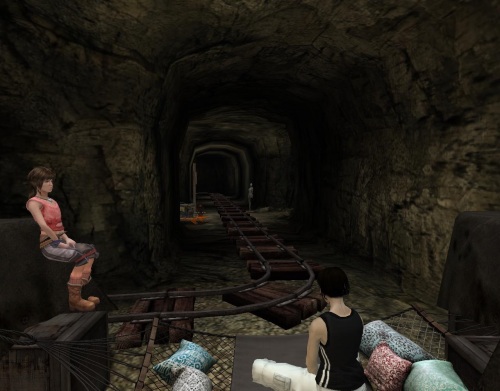 Then she was gone.

I dreamed the snow was butterflies. 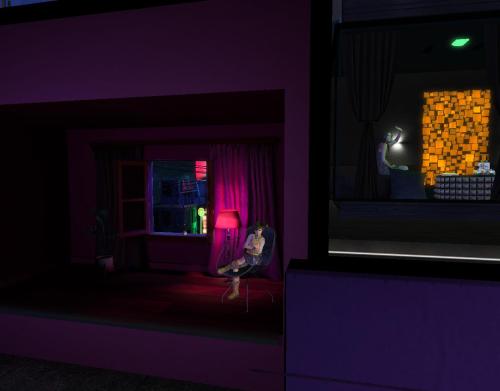 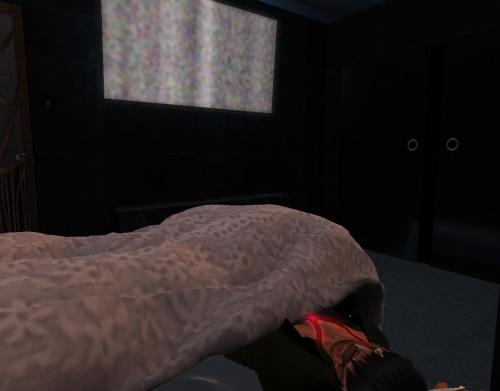 “Hi Tessa!” Carolin called from above while waving. “Ready to go back in the cave?” 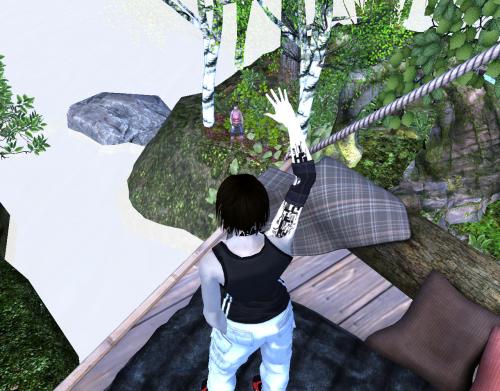 Was she ready? Then she remembered the blackboard, the missing center of the equation. Q. Someone named Q.

She recites what she knows in her head. She is on Crow Island at End of Time. Crow Mountain is above her, the Climax. Meditating Freddie — yes. Bakersworks. They are in a Baker B. work. But… someone is missing. Man – About – T…

“Time,” Carolin finished for her later at the blackboard, writing out three identical numbers in a row, the number of the beast from The Bible. “Now… if we extend this infinitely, what do we have? We have a *7*. So we might as well say it with a 7 instead of a 6 for that third. 667,” she finalized, and wrote it on the board. “Who is…”

“Sepisexton,” Tessa answers, getting smarter all the time, and she was pretty sharp from the beginning. She recalled the capital of Olive, the one before Tin separated and became its own principality, the 7 from the 6. Boy we are really ranging far and wide in time now. But I sometimes write that as far and yd. The man comes out from behind the curtain (4th wall). He is a Woo Woo. He believes in ghosts, cracker jacks, and cereal circles with a prize inside. Q.

“Q.” Carolin points. Red Point. Buick. Boss who is green like Bixby. Canada. They are traveling across the frozen Heartland, trying to reach…”

And that’s the one thing she couldn’t remember that Man of Time did. We are done now.

It all started again with the formation of Thornwood. Thornwood exists: I exist, the Rose be damned. But that was the problem. I couldn’t find the roses again because of the thorns. This was an existential dilemma. Rosehaven also did not exist now. Instead: Rose Heaven. Witch Hazel *must* be suppressed (!). She could destroy this queendom-kingdom with a single, steely glance of those evil, dead white eyes. Powerful. 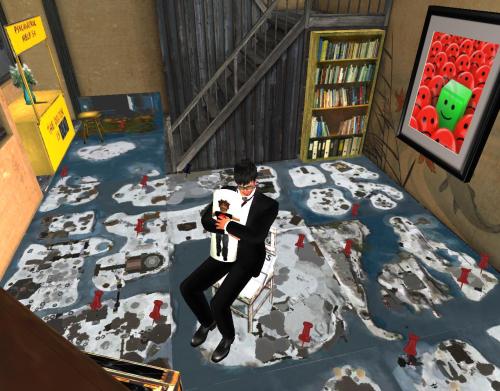 I clutch my Philip Linden doll even tighter. I miss my daddy, *sigh*.

“Don’t you think,” I can hear Tessa in my head (if not in reality, at least currently), “that the truth lies in the ruined village now partially in Thornwood?” I realized this was just me reflecting back to me, but it helped.

The background sound of static. I knew I was back in Room 1898, sleeping in that oh so comfy bed of ours. Tilists — always with the static at night. I wake up (let’s say). Who is beside me? Charlene the Punk? Probably not — (she was) several girls ago. Probably that girl Gigi who hangs around the bar all the time. Just like me. Whatever’s handy at the moment. But I mustn’t wake up, must dream a little longer. I unclutch the doll pillow and turn its face toward me. “What would Philip Linden do?” I ask it. Slot Mountain! came the answer in my own enlarged skull.  I hadn’t thought of that slitted peak and attached haunted castle in a long time. Not since…

Time is all mixed up for me now. I know I’m dreaming but it’s even worse than that, because when I wake up, it will still be all wonky, like Willa. Hey, I could use that (expression) in my memoirs: Wonky like Willa. Slip in some more comments about chocolate and sweets in general to balance things out. Maybe delete that section about arsenic; too much of a downer, like the barbiturate section I eliminated previously. But here I am, wasting precious dream time on my memoir planning. I try to see who is in the bed with me. I’m clutching my Philip doll again, still in the dream.

Behind me, the square piece of land representing Illyria slides up and Thornwood appears in the gap, but brown instead of white like the others. Winter hasn’t come yet, at least not here in the yarn shop. Yarn Shop! Rosehaven? How did I get here?

Wormholes. Must — control — the — wormholes. 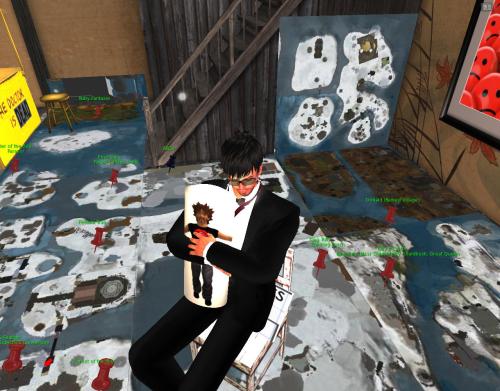 I can’t see Green at all now.

end of the tale

“I was still just a young guy at the time. Young Kane young guy.”

“They called you Kane?” Tessa tried to clarify about Jeffrie Phillips’ past. He’d regained the ability to talk and she wanted to try to get as much info as possible out of him before a potential recurrence.

“They called me many names. Sometimes Kane, sometimes Old Kane, even though I wasn’t — as stated — and then…”

“No, never that. Odd in retrospect. Then Kane yielded to Spankey yielded to Michael yielded to Clark yielded to Woody. It was a whole county full of names, really. And, yes, now I recall about the Kane name. It was short for Hurricane. My actual name was Rainey, and I had a stormy personality.”

Tessa looked at her watch, felt the back of her tired neck. “We better get to the Borderlands again.”

“Right, so I was standing there, in my tuxedo which I always wore in my younger days, clutching my Philip doll — as always, or as usual.”

“We might get into that later on. About the trail…”

“You said something about the Blue Rose,” Tessa said, trying to speed things up. “About *that* particular name.”

“The carrots led right by them. I was on my way.”

“The Bunny Trail leads…” He suddenly ground to a halt. Someone was preventing him from speaking further about this subject!

He remembered, but he couldn’t say. 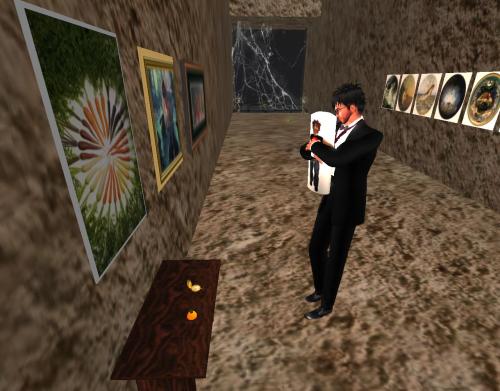 “Like being stuck on the 4th side of a mid-70s art rock concept album, yeah. I get it.”

“‘What would Peter do?’ And that kind of thing.” 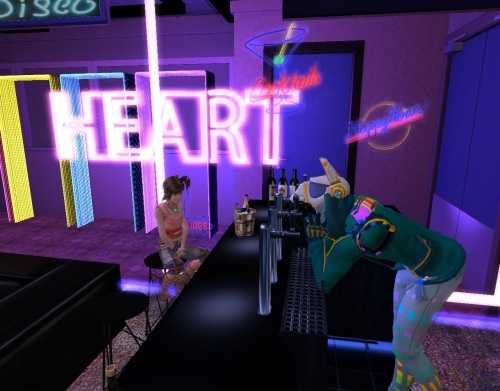 “Sorry. Just raising my elbows out from inside the counter. Right. Here’s my advice.”