“South YANKTON!” Eraserhead Man shouted toward the bleached face Norris. “We need INFORMATION! A man named PHILIP STREVOR has returned from there! Listen and this is IMPORTANT! There’s a giant BEAVER there!”

“Don’t look at me,” Norris demanded in a normal register. “Are you looking at me? Because you’re suppose to be looking straight ahead and not at me. Don’t look at me!”

“I WON’T! I’m NOT!” Eraserhead Man rummaged around in his pockets and procured a cigarette, lit it, and proceeded to smoke.  “You don’t mind if I SMOKE, do you?!” he asked while emitting his first puff.

Norris didn’t answer, remained motionless. Eraserhead Man continued his grilling. “He goes by the name of CASEY here! Sometimes Casey the ALIEN! Last seen in GAETA V — get this — like GTA V! GTA I Said! Grand Theft AUTO! One of our INFORMANTS tipped us off! KEDAR! Use to live over in NAUTILUS!” He stopped there.

“I may have heard of him. We may have shared a drink!” Norris piped up.

“Had a GOLF club! MOTIONLESS FACE. Said, ‘I’m yrev very happy to SEE you old friend.’! I don’t have to tell you what color ROSE we’re talking about here!”

“You should leave now,” Norris suddenly demanded. “The holiday entities could be up and roaming about by now. There’s a chance they may come to this lower plane… just a chance but not worth taking it.”

“CHANTS?!” shouted the hard of hearing Eraserhead Man. Norris forgot to pipe up at the end this time. “What KIND of chants?!” 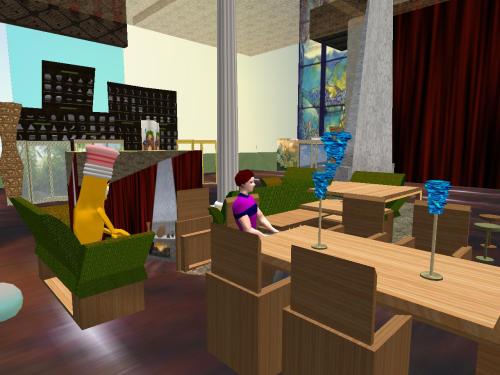