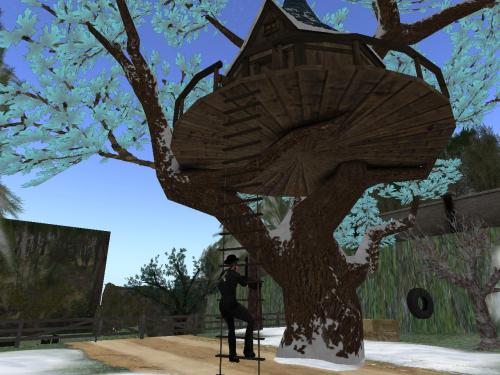 Marion Harding openly admitted to having a thing about trees. Here we see him climbing up the ladder into a treehouse he’s fancied recently. The owners of the main house on the property were never around, it seemed. And there was a gas station nearby which provided a small bathroom and also a bed for his more basic needs. Then there was the nice view of *the* tree. 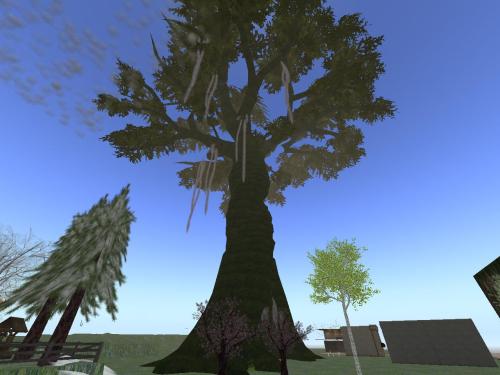 Most Old Ancient (MOA)  was the most impressive thing in Capitol City to Marion. “Nothing like this in your South Yankton,” he told Philip Strevor the other day while petting its massive trunk. This is Gaeta V, *not* GTA V. And while bland and boring overall yes, there are still advantages.” He started to mention Heidi as well, but didn’t want to get Philip thinking along those lines again — about “retirement” in this Muff-Bermingham run by that tall, pale dame he’s described. The heist should be the main focus now. That’s what they were meeting about at the tree’s base. For even Philip knew the huge old growth had authentic power. Power to expose and power to hide. Whatever was in the hearts of men at the moment. And, through knowledge gleaned from his wacky weed and attached fantasy friends, Marion understood how to harness it.

They’d left the kid at the playground in the snowier part of town. George was looking after her. George swears up and down that he’s 13 and not the 10 or so he appears to be. And, anyway, both Marion and Philip knew that Heidi Hunt Ives could take care of herself for sure. It’s just the *impression* of caretakers they were after. Part of the cover.

Anson. He’d received the name from The Oracle that is The Tree. An auto, a *bug*, stolen and then stolen again. Formerly buried in the sand at the wrecked ship just north of Fae’s Boat House by Tom the Booker — Tom Booker — now deceased and buried himself somewhere in the eastern reaches of Corsica Prime. Car thieving was his livelihood. But this theft was special. Because there was something stashed in the exhaust system he didn’t know about. A 50,000 linden reward issued by the Purple Gang of the Black Lake District alerted him to the situation. Then the kid plugged her own ultra valuable information into the equation. This is *the bug* she stated more than once she was working on, beyond the old and middle aged women, beyond even the poodle. Not an insect, but at the same time, yes an insect, she cryptically claimed. A philosopher’s stone she termed it for him.

This is why he decided to bring her into their fold in the first place. The bug. And she claimed to have the power to know exactly where it was at any one time. And it would continue to get stolen, again and again. The money would keep roll’n in. 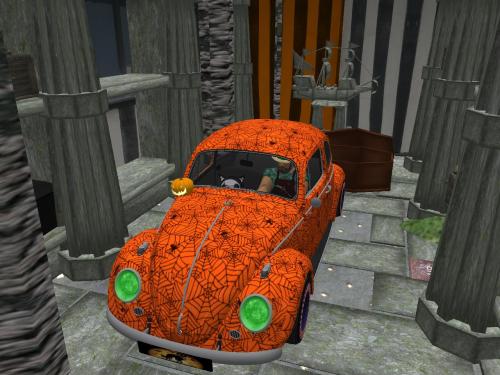 “We’re gonna drive this car all the way to ‘Pumpkintwisters’ this time, Jackie.”

“Shut up and get starting.”