But Ruby (Fantasie) had already left the Borderlands and entered Rosehaven proper with the true coming of spring. She has emerged from between the tigers’ tails which are actually Tiger Tail. This was the true meaning of Eraserhead Man’s vision of the Tigrett in Vineyard Cafe, for they are one and the same, tiger tales both now. 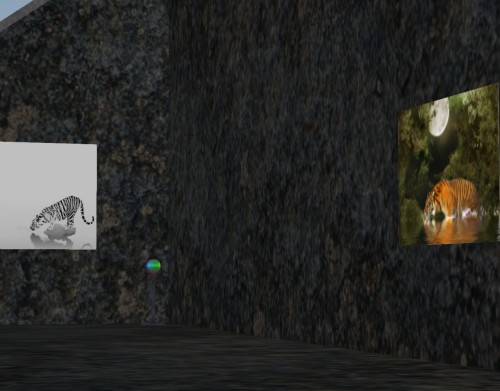 The Borderlands Oracle, the *Mother*, is currently stuck on the figure of Morgaine, an ambivalent character from Arthurian legend who can take on both negative and positive roles. Red and blue if you will. Surrounded by 12 rounded rocks, this border also signals the end of our yarn or weaving, or as far as we can take it currently. Our 12th Collagesity novel.

Borderlands has greenly homogenized with Rosehaven as a whole. There’s no need for a tale now within. We are done with it. Same with Fruity Islands, End of Time, The Waste. All put away in the creative closet, perhaps pulled out later for further play. 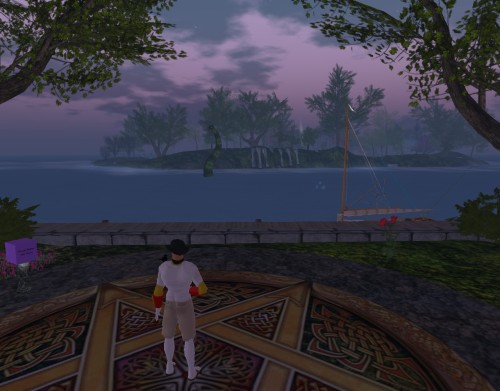 The Brachiosaurus which doubles as a sea monster here seems to be telling Baker B(loch) goodbye.

But what of Mssr. Gold and wife April Mae Flowers of Snowlands? Herbert Gold will keep dreaming of these lands for certain — he is stuck as well. April Mae will keep seeing the gardener Steve on the side and visiting her ex’s grave over on the Omega continent. The mysterious Bauerbridge dune will remain an obstacle in her way. 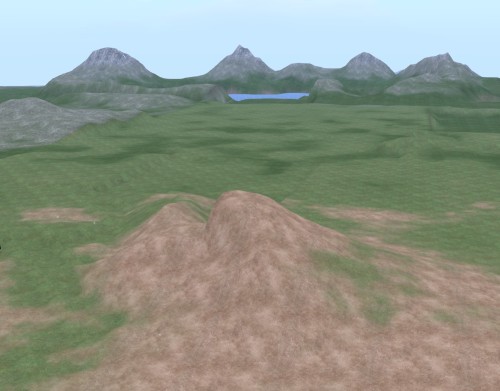 Despite the end of perhaps a cycle of Collagesity novels, Collagesity itself also goes onward, up and away and beyond the effects of any storyline. For this is home. The anchor. From here I can enter any world I dare to penetrate with a certain style of wizardry: Stonethwaite, Tugaske, Avebury. All the “satellite” realms. But one has to have a center to return to.

So I, Baker B., Baker Blinker and Baker Bloch both, will say goodbye to you my loyal reader while sitting at home sipping on my Starbucks 4 shot latte and enjoying the relative warmth of an early spring night.