Rock Ramby sure knows about trees and plants, thought Allen Y., listening in for the second hour now as the muscular dude babbled on. “The redwoods are a hybrid clone,” he was currently saying. “I got dwarves as well. I created all and everything on this sim,” he reinforced again. “Horses too.”

“Tricksy?” Allen ventured while scratching his chin, testing the water.

“That a horse name?” he came back. “Doesn’t sound like one.”

“Yeah, that’s the one I mentioned meeting on the way over here. All the way back at the first of our, er, conversation.” A long, long way back, he thought to himself. And he hasn’t mentioned this mysterious Hitchcock in a long time either.

“Mirabel,” corrected Rock. “A transer, yeah. Tricksy could have been it.”

“That’s what she said,” Allen held firm. Blasted know-it-all. In truth, Allen Y. had become weary of the chatter about 20 minutes in. He’d heard enough blowhards back on his home planet of Elven.

Just then, what appeared to be jingle bells sounded outside the cabin, breaking the banter. “Cool,” Rock Ramby then beamed. “Sven’s back. Runs a packing industry over in Misty Mountain, you know. Let’s take a look.” Rock springs up from the chair on his powerful legs and moves toward the front door. He draws his knife just in case. Less spry Allen Y. stands and follows; peers through the opening behind him.

“More veins and arteries for your boy, Rock,” called Sven merrily, landing just behind the circular train track. He threw a bowed package in his direction, which Rock deftly caught, knife still in hand. “Schweet,” he yelped. “Thanks Santa!”

“Sven, please. Merry, um, Something!” he shouted as his jingling reindeer lifted him and his heavily packed sleigh back into the sky. “Merry Something to All!”

Shuffling behind Allen Y. as he watched the sleigh recede. He turned. “I heard my name,” issued a Zeus-like voice. 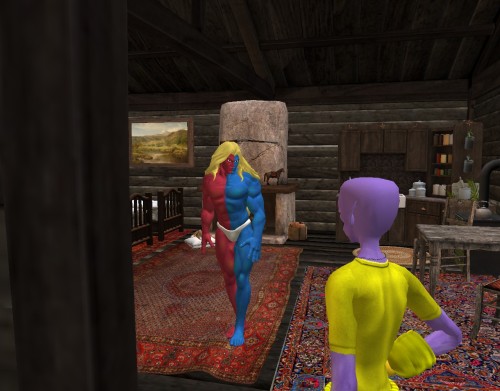 Where the hell have *you* been hiding,” the yellow alien thought.