Kevin had a nosy neighbor with the initials SCP who liked to peer through his windows at times. So he covered them with clouds.

Like many residents of Horns, Kevin A. had a strange, nay compelling fascination with chickens. He often slept at the dinner table so that he could more easily enter their fowl dreams and frolic amongst them at times. He thought the eating of cocks was borderline cockamamie and often mentioned this to his “Kevin brothers” C. and E., munching and crunching away on either side of him. He sometimes arranged the carcasses in ritual poses also learned from witches to more interestingly translate between fair wake and fowl sleep (Fairmount and Fowlerton).

Which reminds me that he must fill up with gas and air today across the street at Wolfy’s, fuel and tires running low on his new 1955 Porche 550 Spyder Convertible purchased from Marcus Fox Smartville day before Tuesday on what he considered a sucker of a deal, curses be damned. Only 50,000 lindens plus 5,000 for shipping. Stamp it: BARGAIN.

He is established here; he really cannot go back to Regaltown. I’m not so sure about Space Ghost, however.

“I wonder what happened to Kevin, Space Ghost?” 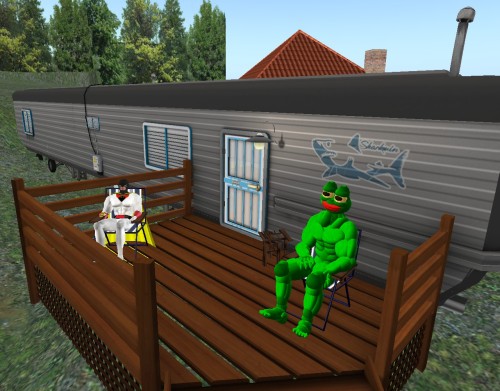