But then he changed his mind, Bellisaria’s Wheelhouse sim popping into his head again. Wheelhouse… Wheeler. Wheeler’s House, he realized. He heads to the Blue Feather instead. Roger Pine Ridge wasn’t home so no loss there anyway.

Inside the Blue Feather, in the Table Room on floor 2 still attached to the Perch Restaurant, just like in Collagesity, another secret meeting was taking place. Hucka Doobie was demonstrating the oddity of Polk County for Baker Bloch. Although Wheeler Wilson still technically owned the Blue Feather, she had always let members of the same named club have access to the 2nd floor. And the first and the third if they wish, but there was less reason to do so, or at least to *linger* there. The Blue Feather (Club) was designed to be an establishment of lemony persuasion, and the roundabout 1-3-2 way of traveling through it was part of this heritage. Its development is traced way back in novel 2, when Wheeler took over the reigns of Collagesity from one-eyed, giant chartreuse alien Carrcassonne in a coup. But now The Man About Time (Pierre) is pondering a return for the deposed former ruler. In some form — he hasn’t decided what or how yet. He’s currently set aside “Floydadada” to study up on how Jacob I. tried to take over the town back in novel 7. It may be handy to track down the similarly one-eyed deity who failed. Last seen in the Gaston estate sim as far as anyone’s best guess goes. But The Man About Time actually checked there earlier today: no luck. Maybe his pet or companion Broken Heart Jackie. Hmmm. Hmmm, again. Many wheels spinning in his head.

“‘Goodnight Violet.’ Like I said goodnight to gallery exhibits in general after that time.”

“She liked me, you know. Violet I mean.”

“Well. Let’s head over to Fal Mouth Moon, then. See the related work.” 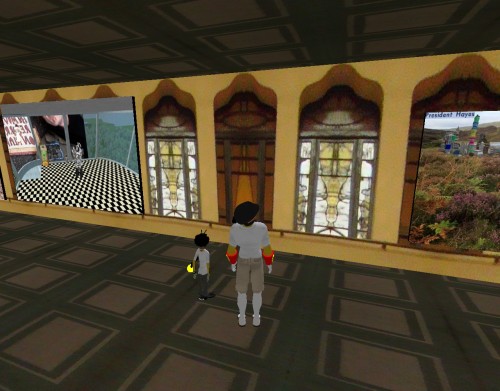