Late Friday evening reports of The Mists rolling through the Realm trickled in, and in the morning of Saturday, the explorers of Rosehaven confirmed that the region known as Rosehaven Serenity had up and moved to where Rosehaven Anodyne was. The whereabouts of Rosehaven Anodyne is anyone’s guess, perhaps it needed a holiday and set off to waters unknown. Please update your personal charts and maps to reflect this change. An officially updated map is being drawn up as we speak.

Donald was disappointed that his whisky drink he so enjoyed last winter had, in the meantime, disappeared from the extensive list of alcohols offered here at The Cup and Harp. 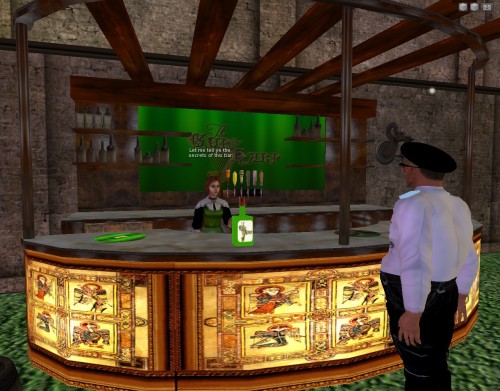 “I”ll have a, er, bourbon,” he said. “Some kind of bourbon; any kind.” He couldn’t quite mask his disappointment to the bar maid, one Felicia McApplebaum from Rosehaven Serenity. They’re still getting over the mysterious disappearance of a whole sim called Rosehaven Anodyne over there, she relayed to the still sober Donald Farr when he returned for a second. The alcoholic content of the Kentucky bourbon seemed to not be matching that of the Pennsylvania whiskey he loved. “Make it a double this time,” he requested, determined to get some kind of decent buzz off the stuff. And it was here that Donald learned the first name of the bar maid and learned where her home was in the kingdom/queendom and the queer story of the disappearance of a whole, neighboring sim back in May as he downed the drink in two long draws. Rosehaven Anodyne was, then, present when Donald visited last year for his annual winter vacation. “The mist, eh?” he spoke about the claimed culprit, deciding to stay at the bar a while instead of returning to his lonely booth. He began wondering if Felicia had a husband or boyfriend or significant other. Maybe *he* could fill this role if not. It was also then he realized the alcohol was sneaking up on him from behind, a surprise rush to the head. Kentucky is not Pennsylvania. Alcoholic drinks affect one in different ways. Much like flowers of the world, some bloom later than others. Such is the case with Bee McCabe’s Special Stock distilled in 1919, a good year for such, and coming just before Prohibition in the Blue Grass State, a year earlier than the country’s Prohibition, explained Felicia McApplebaum to the swimmy eyed Donald only a minute later, his pupils now big as a 1920 Kentucky Anti-Prohibition Alcohol Token. “Marry me, Felicia,” he blurted out before losing his balance against the counter and collapsing onto the Irish Green floor.

McCabe’s Kentucky bourbon would be his drink of choice from now on. But never a double again and always sipping slooooly.