“Okay, don’t tell me Bird Brain,” he requested to his apparent friend at the main drag. “Okay, *there’s* the main door, the Yang and the Yin. I, er, have just erupted from the Flea Market which is my home. My *work* home — ahem, I do not *live* underwater, see, heh heh. I am not a fish myself, har.”

“So we’re lost.” Parasol was thinking she could do better than this by herself. Perhaps the old man is senile. How would someone with even a slight case of dementia cope in this maze of a town. They couldn’t!

The fish butcher licks his index finger, then holds it in the air, as if testing the wind. The same finger then points toward where they just came from. “*That* way,” he exclaimed confidently, and began to walk. Parasol obviously didn’t follow. And, actually, he didn’t expect her to. The butcher knew the flea market and his included underwater work spot well enough. That was his world. On a regular basis, he would come out and ask Bird Brain (limited to his own world around this particular leaning pole) directions to this or that place. It was a routine they shared. And always the closer: “Go tell it to the bartender.”

The butcher indeed lived in the flea market. He existed underwater. And, by this point, was probably a fish himself. But he likes to forget this every once in a while and come up for air (but not for long).

Parasol was on her own again. 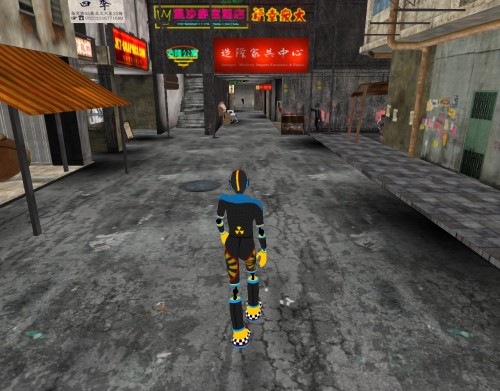 She was indeed underwater but not in the right place. Damn confusing town! she cussed to herself. “Excuse me sir,” she requested to the fish butcher who was working down here. A larger fish swam between Parasol and him, eclipsing the man for a moment. Then she continued.

“Loco?” the man tried back between chops. He was very fast, and was almost ready for a second gutting as they spoke.

“No — *Kuck*- koo. Kuckoo Kuail.” Her red and blue eyes burned brightly into the man. She wanted him to understand but saw he probably didn’t. She rechecked the psychological photograph taken earlier and tried again, using a different landmark. “How about the, um, Palace Hotel.” The first name of the hotel was cut off in the photograph. Hopefully this will provide enough information.

The butcher slung another fish in front of him and dropped the just gutted one in a metal bucket at his foot. “That one is for supper later,” he said, pausing for a smile, red chopper still for a moment. “No tell, no tell!”

“Ah, yes. So, I, ah, know that place you are talking about. You are looking for someone in particular? But not, ahem, *Loco*.”

“No. Loco doesn’t exist. I was looking for Kuckoo…”

“I don’t know about that. I’m just looking for her house.” She was actually looking for the whiteyes Axis found earlier but of course didn’t mention this. It was on top of a barrel only a couple yards from Kuckoo’s front door, which she knew from the photo.

“I will take you there,” the butcher said, setting down the tool of his trade. “You will walk with me…”

“That’s not –” but then Parasol stopped her protest, knowing she would never find the place without his help. Another fish swam between them. “Thank you.”