“Where are you again, Toddles? I can see the green (right) and the gray (left) but you’re nowhere to be found. I need you to be *somewhere* — and just not in my head.” 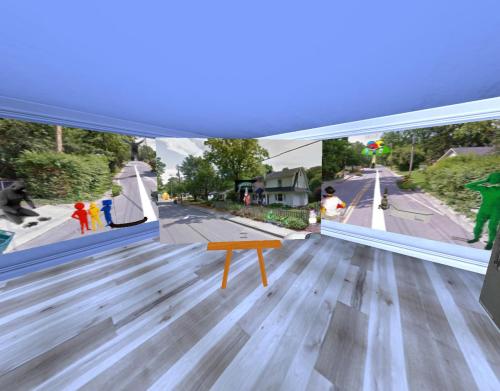 “Behind the UFO,” the small child spouted in her cute-as-a-button voice. So wise for someone so little, but that’s the psychic part working its way in. She can also see into the 4th dimension and bend her vision around things.

Alice Farrowheart finally understood that her grandchild, speaking directly into her mind at the time, was behind the saucer centered collage in the middle of the room on the easel. She decides to move around it to examine the bigger collage more, framed by the green and gray figures she mentioned earlier and spanning two of the 4 walls. But — right or left?

“Choose right,” uttered the magical child, sensing her thoughts and spacial placement again. “Then left till you get to the umbrella. She wanted to emphasize green over gray for a particular reason. She had already told Alice the Pooh (bear) holding a red parasol and pulling a blue cart with a honey pot was exactly halfway between (Phil!).

“*There* you are, child. And there’s the umbrella tucked snug in the corner, just like you said. Not surprising of course.”

“Right between the two,” Toddles reinforced, into her sight and out of her mind, to Alice Farrowheart’s relief. The prescient toddler pointed to the doubly displaced green “T” at the bottom of a Telephone pole and elaborated the connection with Colona, the twin city of Teepot in the Confederation. A graphic representation of what she said to her grandma for now; more later:

We end with a front pic of the Red Umbrella gallery itself, returned to NWES City as of yesterday: 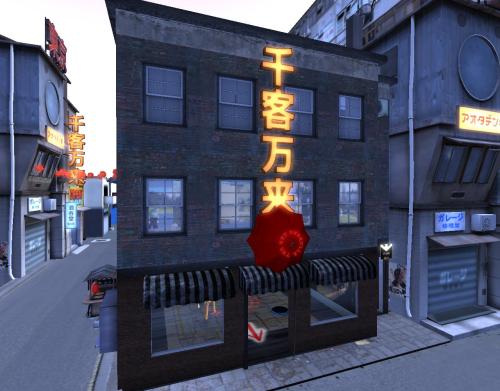