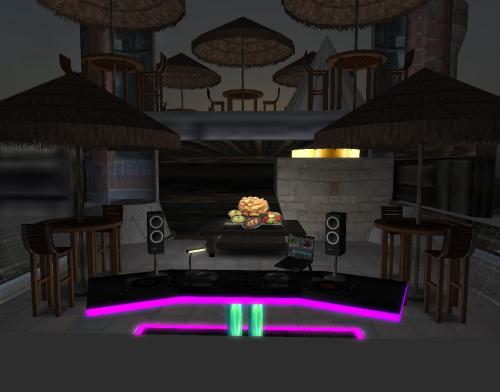 The buffet was already laid out on the serving table at The Cones, my latest local eating and drinking establishment but this time for core avatars only, where they can let down their hair and be themselves and mingle amongst their other selves without the need for masks and separate identities. Take silhouetted Andy Warhole here on the upper deck, waiting for his date Marilyn to show up. But actually they were one core avatar and each knew the other knew this. In the moment. So while he waited, he was actually waiting for the single user of both, the single core used by this user, to simply change his costume to Marilyn’s, switch chairs, and then combine snapshots of each into one composite photo to make it seem the two were on a date. This happens over and over in the outside world, with little recognition by the avatars themselves. But here, at Sunklands Institute in the great Iris waterlands — swamp some derisively call it, like Roger Pine Ridge back in the days — separation could be relaxed and examined more from a distance, a perspective. Photo-novel 13, in fact, is all about getting back to core — that could be a subtitle.

The sun had just set when Warhole switched chairs and the collaging process mentioned above took place.

“It’s purrr-fect here,” she cooed while staring out at the spot where the sun had just set, seeing no aftereffects commonly known as twilight, or the refraction and scattering of the sun’s rays caused by the atmosphere. Strange — this wouldn’t happen in the real world. Real Life. She decided to ask about this.

After Andy Warhole uttered the almost obligatory 5 or 6 repeats of her name, all in the same monotone, he responded properly. “No this isn’t real for certain, this — *world*.” But not being very philosophical he had no more to say about this. The DJ for the night showed up, and he mumbled, “About time.” It was Hilter, Chancellor of all of Germany by this point in time but not the all encompassing evil dude we know and despise by a slightly different name. So: 1939. Twenty years after the publication of the infamous Red Book.

Actually I have to bring in another core avatar to play Hilter, since Baker Bloch doesn’t have that costume or what’s more commonly called, in Our Second Lyfe terms, an “outfit”. So Bracket Jupiter is logged on since he does — two core avatars here are logged on simultaneously, which is common and even necessary in my work. He takes his position while I make another collage of Marilyn and Andy in the background. I add facelights to both to help highlight their position. Hilter waits calmly for it to be over before starting his first tune. And what would that tune be, you might ask? 1939… lemme check. INSERT PHOTO HERE 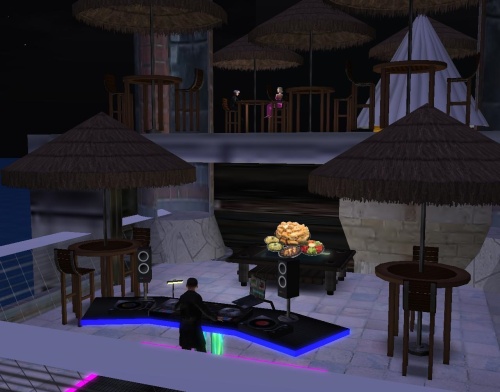 I believe it was Pink Floyd’s “On the Run” combined with Judy Garland’s “Over the Rainbow,” but difficult to say definitively because of the confusing effects of yet another collage.