Deep into the night, far past supper, the person formerly known as Amber and several other names decides to go into the city. She sits on the subway, wishing the town council would vote to get it up and running. But they have so much else on their plate! She’d have to walk. 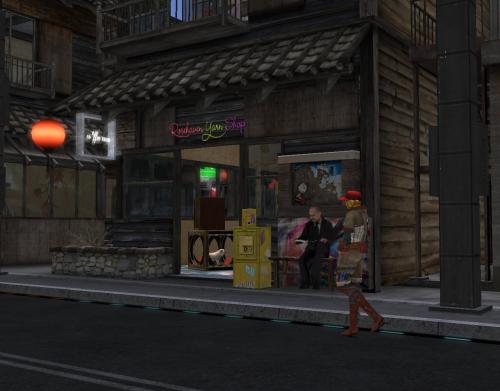 But she didn’t have time to investigate tonight. She had to get back home to the Deep South of Black Ice by sunrise or else be found out by the parents. She was a man. She was a woman. Onward to the Red Rose owned by a Peet Aries who she’d never met but Dr. Baumbeer, the current renter, spoke glowingly about. Dr. Baumbeer: another changer, she thought as she passed the yarn store and kept in a straight line northward.

She had to stop to look at a map…

… then she recalled the Red Rose wasn’t actually in the Neptune sim she was currently passing through. Instead: Apple’s Orchard. Where she or he had his or her earliest memories of the city. Good times. She remembers something about a neck. Neck City it was called back them, but that was a faulty implant, pheh. Much like… here she reached up with her left hand and felt something that had changed in the meantime. She recalled Sandy Beech doing the same. Or was it Herbert Dune. She looked around, feeling people watching her — cameras. But no one spotted.

Like any urban area worth its salt, the city was changing.

She couldn’t go down this road any further — blocked in this direction. She checked her watch. 4:15. Time to be heading down to the lower side of Black Ice and crawl back in bed. The Red Rose must wait, she realized. For tonight at least, she would remain a woman.