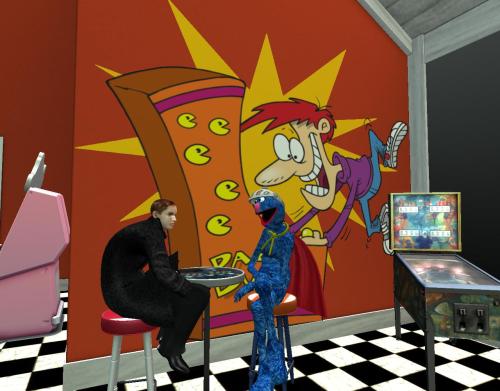 “I don’t know, Groover,” he put it mildly but seriously. “I’m just not feeling it yet in…” He considered the name of the place, the village. But not a village. A community. Centered around Blues. He stared at his blue companion; decided to ask him about a name. “What do you locals call this, um, neighborhood?”

Groover stared back, also considering a name. He hadn’t thought of it before. A list developed in his mind, Thirteensboro at the top. Unlucky Village? But 13 is a good number according to TILE tarot reader Marsha Slot, due to arrive at quarter past the hour to start her shift in the next room over. We should wait for her, Groover realized. He told this to Man About Time (MAT).

The front door opened and closed. A woman’s footsteps were heard going into the other room. “There she is,” MAT said over in his soft tone with raised eyebrows, and they got up to go get her first reading of the day. MAT had 50 lindens. He hoped that was enough, because he knew Groover never carried around cash with him. No pockets.