The unique chord progression for “I Walk the Line” was inspired by the backwards playback of guitar runs on Cash’s tape recorder[4] while he was stationed in Germany as a member of the United States Air Force. Later in a telephone interview, Cash stated, “I wrote the song backstage one night in 1956 in Gladewater, Texas. I was newly married at the time, and I suppose I was laying out my pledge of devotion.”

“One has strings, the other doesn’t, these HARDR pools, the only HARDR sims in Our Second Lyfe currently (Hardrada and Hardrock Island).” 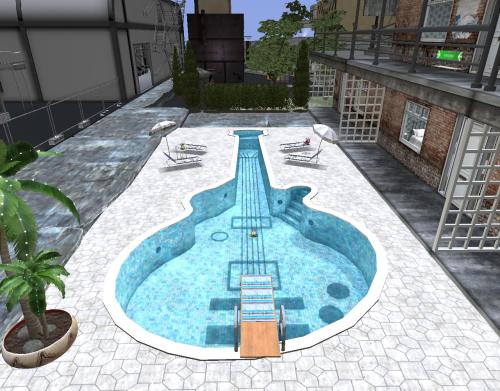 “Obviously the same creation besides that, Hucka (Hucka!). The unstringed one, useless for playing, see, merely points to the stringed one, the useful one. This is the same as Franklin’s guitar she was playing backwards in respect to Apples’, which is the same as Johnny Cash’s guitar, or at least the one he played backwards as inspiration for perhaps his seminal song ‘I Walk the Line.’ We can understand this through Franklin KY.”

“Sting is a line,” added Hucka. He’s just warming up perhaps. Been in storage for a while. “I meant string.”

“Gotta run.” And he was gone — oh well; not even time for a snapshot. Plus I couldn’t get to the stringless one since it was on banned property (I continued on my own). I think back to the 2 pools, banned and unbanned, on Owl Island, and how we also found doubles of those in Eveningwood. Back in novel 26, which is becoming more and more relevant to our current novel, 36…

Along with 35 of course. Photo-novel 36 seems to be more of a direct continuation of its predecessor than ever. See, for example, here (post/riddle from likewise section 01 of 35 unraveled/resolved):