Looks like people down there at the red lighthouse but aren’t. Man and woman. 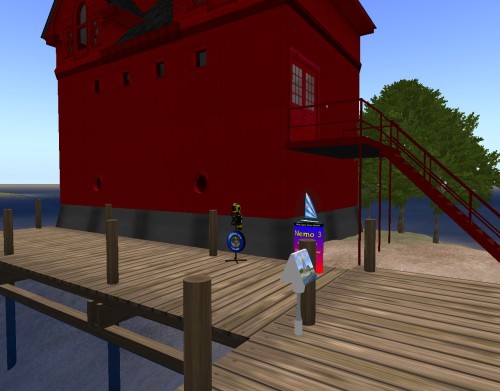 Red has come up a lot lately. And the shape of the lake this island lies within — L —  is symbolic of red via TILE. Will Karoz return to energize his college?

Now where are those itty bitty bugs. Down below that empty house over there? 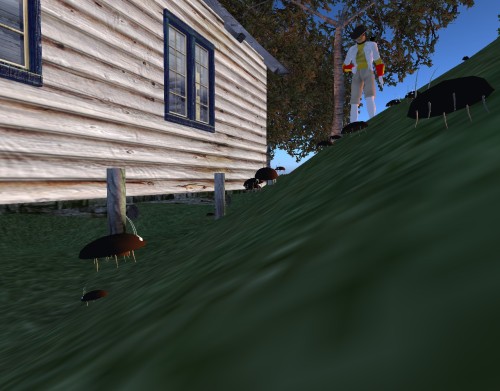 I believe that the Mossmen, perhaps including this Gene Fade but perhaps not, are behind the recent phenomenon of black holes in Our Second Lyfe’s sky at dusk and dawn. This is Moss Island. In the middle of an L shaped lake. Moss (character) wears an L shaped tie in the Red Umbrella (Stonethrow) collage Hucka Doobie was found recently studying (“Whiteyes”). L within Moss instead of visa versa.

It’s all leading to the red door. And what’s inside. Moss(men) guarded the door and made sure it was tight and secure until April 2015. Then when it was opened the game was set. The WIS maps all center around it. Just northeast of fabled Whitehead Crossing where Spongeberg Resident seems to live now in his open teepee.

There’s nothing else, really, on this Moss Island in the L shaped lake. It is just another stepping stone on the path of truth, another pointer in the direction of fate. 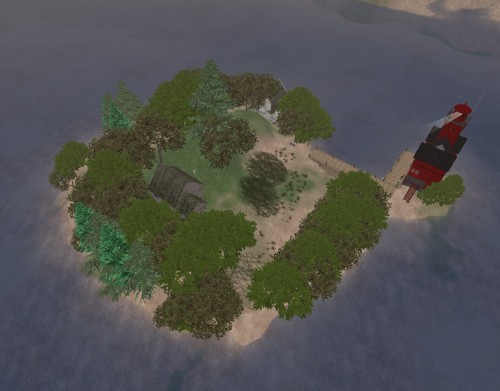 Up or down? Hucka Doobie asks herself.

A new batch of toy avatars now make their  home at Red Head, near its South Rock. I bought these at the Mythopolis flea market for 5 bucks total. I think it was a sweet deal. And now I have yet another batch bought from the same dealer since. Nice. But they might have to wait until the fall to join their brothers and sisters already stationed here.

Knotty tree on the hillside west of Whitehead Crossing proper.

Brick in the stream here. There are a number of bricks in or around Green Stream as it flows through Red Head.

The Red Head Path again, this time leading to North Rock at the upper extent of the main body of cascades. 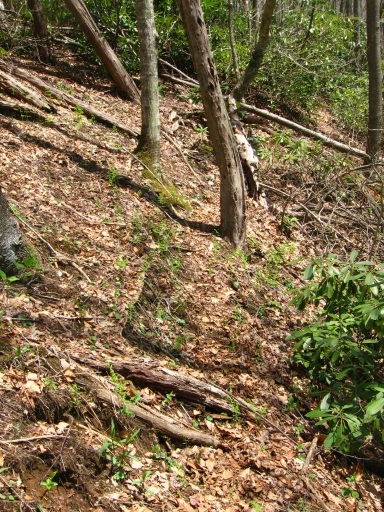 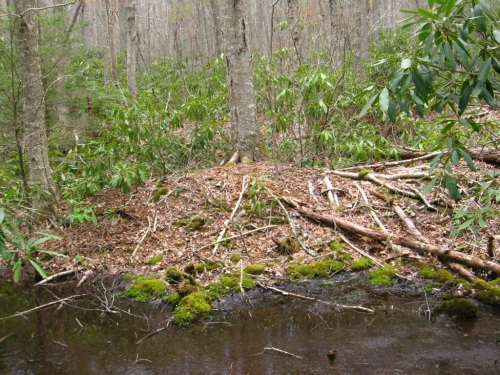 And *this* is the projected site of a cabin (etc.) just beside South Rock. It represents the new heart of Red Head, appropriately near its geographic center as well. It won’t be this summer that I’ll start the project, and perhaps not even the following summer or two. But: soon (projected, once more).

What will the construction of a “cabin” mean to this region and the mythology of Frank and Herman Park as a whole? Hucka D. has indicated to me that the cabin already exists there in hypertime, and I can draw on its energy. Hmm. 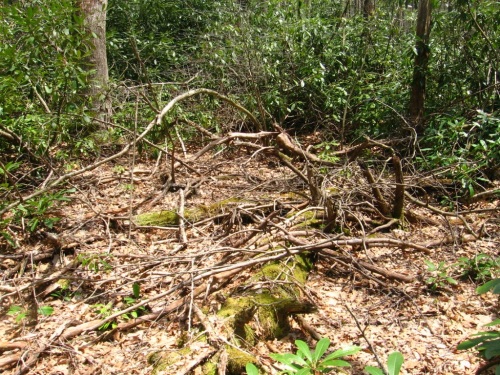 Twinned carolina hemlocks of Whitehead Crossing, near the new teepee there.

Another prominent rock in or near Red Head, a bit south of Green Stream. Another no named rock as well.

Here we’re back in familiar blog terrritory in Whitehead Crossing proper, with its two dead hemlocks marking a southern entrance to the Straightaway.

4 Sticks region, sighting what might possibly be another Bee Line LINK formation… 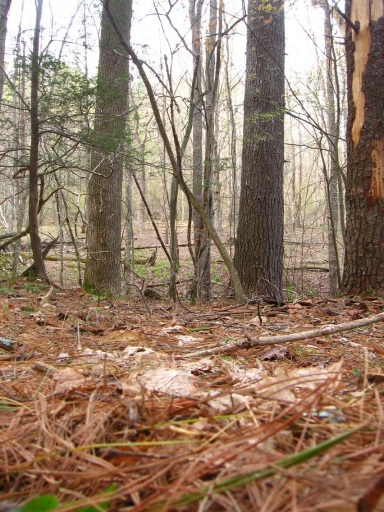 Orange Hill, former (present?) home to Falmouth or Dundee Castle, is eroding away. Won’t be around too many more summers. Should I even take steps to preserve it? 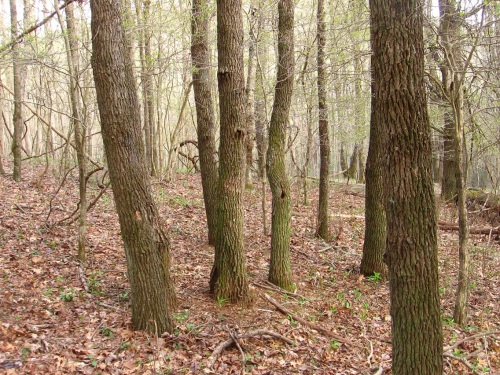 Green Turtle and The Emerald. 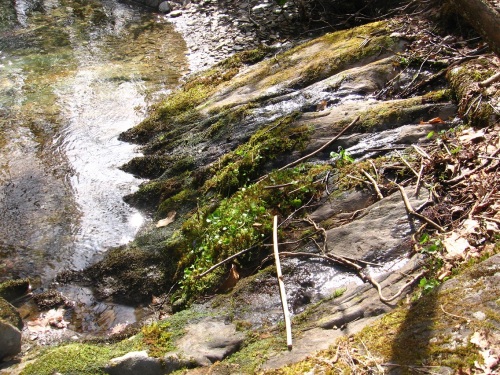 Red Head (main) path. Fairly complicated system here. I haven’t yet created a map. Will I this spring now that it’s probably sealed off from me until autumn? 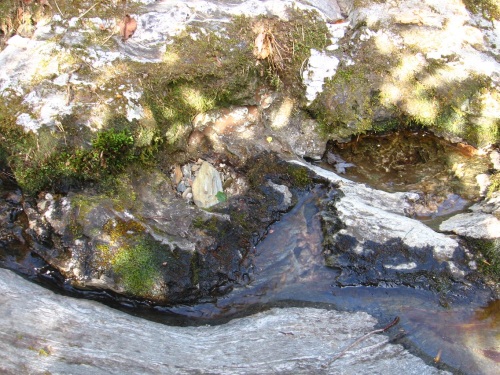 Looking up Green Stream from the bottom of the main run of cascades. They’re low but still exciting. 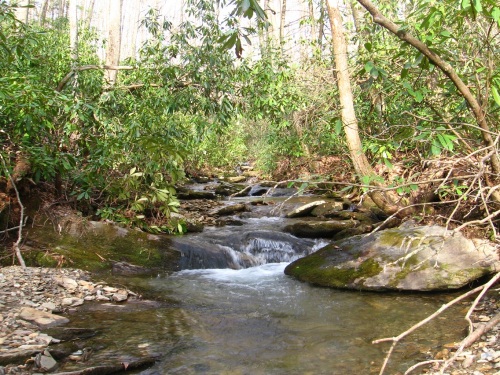 Larger rock at bottom of cascades, with South Rock just beyond. This seems to be a mini-center of energy within Red Head. I believe now that a cabin (etc.) will be built just above here. 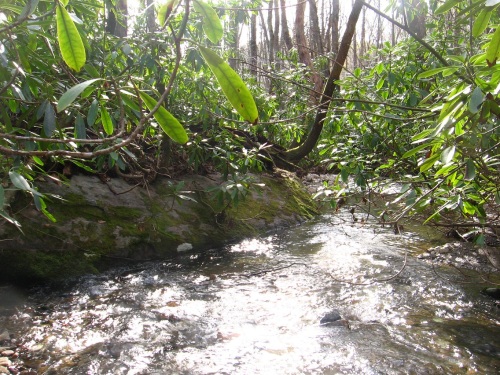 On one of Green Stream’s rocky beaches just below Red Head proper, I found a piece of blue glass. I decided to take a picture because a similar shard of glass was found just downstream on the upper limits of Whitehead Crossing several years back. Comparison picture here. LINK Since water doesn’t flow backwards I’m going to assume it’s not the same piece of glass. Could be from the same bottle, etc., obviously.

Red Head’s shallow but substantial pool, once more. Must get a name for it. Shallow Pool isn’t good enough. 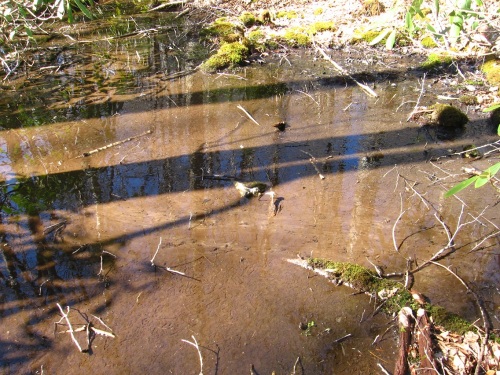 Partially moss covered rock at the top of the cascades region, near the biggest rock. Again — names.

A newly discovered, larger rock on this great day of hiking, in a general uphill direction from the rock pictured above. It’s large enough to have its own type of microcosm on top, as I tried to capture a bit in the second photo below.

A smaller rock beside it with slates of rock on top. Looks like they were almost laid out there in a purposeful manner.

The top cascade, once more. 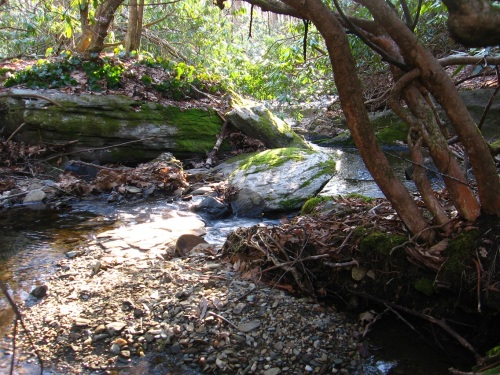 Interesting stack of tree trunks that can be seen from parts of Red Head — a landmark.

A Red Head side stream in its lower part. I believe this flows directly into that shallow pool mentioned above. 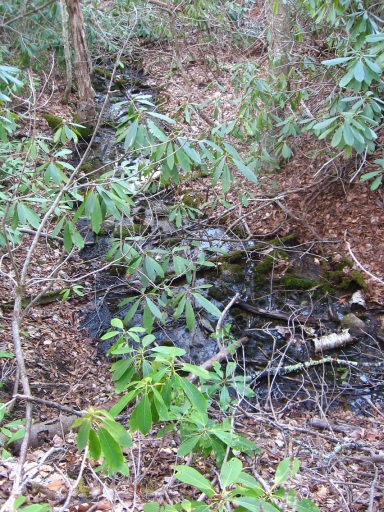 Heading uphill and out of Red Head, I came across this animal skull of presently unknown species. I’ll have to take a better picture when there’s more light, and compare with online resources.

A more interesting rock on the slowly developing path back. I’m not sure I’ll enter Red Head enough to make a stable trail, but, then again, there’s only one feasible way in basically and it goes through here.

As I’ve spoken about before, the problem with the name Red Head is that it lies on (and near the source or head of) *Green* Stream, while it is Greenhead instead positioned on the smaller tributary of Green Stream named Red, probably Red Brook or Red Spring. Obviously there’s a bit of a switcheroo happening here. I think of color-blind people who can’t differentiate the colors green and red.

According to Whitehead X-ing mythology, Red Head was named for Leaf Erik’son’s father’s red hair. In the real world, the source of of these 2 Whitehead X-ing figures are famed Norse explorers Leif Ericson and his own carrot topped father Erik The Red.

Thorvald Asvaldsson [Erik the Red] was banished from Norway for manslaughter and went into exile in Iceland accompanied by young Erik [Leif]. When Erik was himself banished from Iceland, he traveled further west to an area he named Greenland, where he established the first permanent settlement in 986….

Erikson and his crew travelled from Greenland to Norway in 999. Blown off course to the Hebrides and staying for much of the summer, he arrived in Norway and became a hirdman of King Olaf Tryggvason. He also converted to Christianity and was given the mission of introducing the religion to Greenland.[13][17] The Saga of Erik the Red and the Saga of the Greenlanders, both thought to have been written around 1200,[18] contain different accounts of the voyages to Vinland.[19][20] The two only known strictly historical mentions of Vinland are found in the work of Adam of Bremen c. 1075 and in the Book of Icelanders compiled c. 1122 by Ari the Wise.[21] According to the Saga of Erik the Red, Leif apparently saw Vinland for the first time after being blown off course on his way to introduce Christianity to Greenland.

First person — perhaps a Mossman — to visit The Crossing was Leaf [Erik’son]. His father was Red who became the Redhead Father of All. Father God that is. Leaf came from the east — Greene Knob, which we may now call Greenland Knob (still working on that name). All the land to the east, after that, became known as Redhead, however, after The Father. Whitehead was named for the white headed God the “Christians” of the region worshipped, and perhaps Leaf himself per the history of his real life double Lief Erickson. Then the Bees inexplicably had a Greenhead, perhaps just a joke to balance out Whitehead and Redhead. Perhaps something to do with Washington Co., Fla. and its Red Head, Greenhead, Whitehead Crossing, Poplar Head, and Orange Hill and Norum.

WH X-ing also has a Vinland region bounded on the “west” by No Title Spring, the “south” by Weed, the “east” by Five Points/Mall area, and the “north” by [Markland perhaps?].

It is fairly clear, I think, that Greenland represents the mountain known as Greene Knob south of Allen Knob. Both of these lie on the western edge of Frank Park, and are of similar elevation. Green Stream runs between the two.

Leaf Erik’son established himself at least temporarily at Vinland in what was later to become WH X-ing. This would be the ancient past. A time blind person could not differentiate past from present and future, however. At any rate a monolith remains, telling us of his presence (presents?) there. 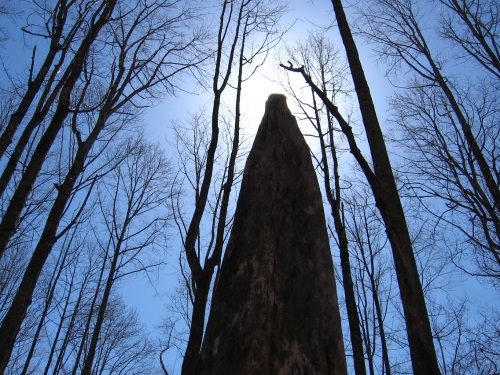 “You got it. Leaf was blown into [and through] Whitehead Crossing a number of time.”

The sadness of sophistication has come to the boy. With a little gasp he sees himself as merely a leaf blown by the wind through the streets of his village.

When the moment of sophistication came to George Willard his mind turned to Helen White, the Winesburg banker’s daughter. Always he had been conscious of the girl growing into womanhood as he grew into manhood.

A snapshot from land above the cascades, where Green Stream flattens out and collects a number of side flows in the process, like the one pictured below. I know — I’ll get some better pictures soon. Just wanted to chronicle the exploration for today’s post.

I wandered through this more constricted area quite a ways before turning back. Complicated! I can’t wait to map it all out. So this flatter area is above the 2 blocks of cascades we’re talking about. And then there’s flatter land below them, which would border Whitehead Crossing proper to the west and south.

The second section of cascades represents a somewhat steeper descent of Green Stream through Red Head. It also marks the place where Green Stream experiences its steepest elevation change anywhere along its approx. 1 1/2 to 2 mile long route, most likely. The topmost of the cascades is here; again we’re dealing with some very interesting looking rocks…

… such as pictured here in an earlier blog post…

And this stone I dubbed South Rock on my initial hike in the area did indeed turn out to be at the bottom of this stretch of cascades before the stream flattens out again. It is the southernmost of the larger rocks, and perhaps makes a nice balance to the rock at the top of the first cascades above it (the “Billrock parallel”), which I might call North Rock, then. But don’t commit me to that.