Bill Mtn. to much of rest of Frank and (esp.) Herman Parks 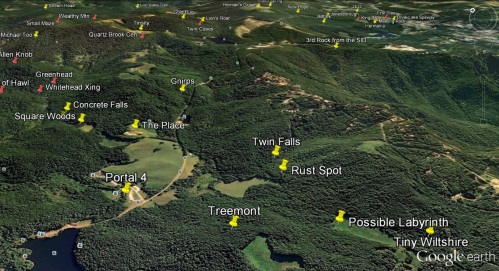 Since I’ve gotten around to writing the text for this post, the appellations for the lakes pictured below have changed. Head Lake in the map has “reverted” back to Heart Lake, and the actual Head Lake appears to instead be the larger body of water at the bottom of the map, here called Heart Lake. So the two names have been reversed in the meantime. Drink Lake, to the left, will probably be still known as this in future posts, although it is understood that behind-the-scenes planning had it at some point as Hand or Hands Lake. Instead, at some stage in the development, the “Hands” part was moved to the opposite side of the stream in effect, or made the *source* of the stream, hence Hand Spring, which begins with “hands” as well (upper center of map). The implications for this move are quite enormous for the Frank Herman Einstein blog.

And now Bass Ackwards Lake (map’s left) is now called or implied to be Health Lake, completing the 4H analogy. And all this is now directly assoc. with the state of Arkansas through its own, strong 4H resonance, including containing the only US Heath and Heart population centers. Health Lake also could be different from the other 3 named Herman Park lakes in that it might be spinning in an opposite direction from the others, whatever that means. One clue to this is the removal of “Wright” from old 3 leaf clover emblems of the 4H club when a 4th “H” is added, which might mean that the one *left*, the 4th (Health), is spinning in the opposite direction (or opposite of (W)right). But what is this spinning if so? Could it be the direction of time itself?