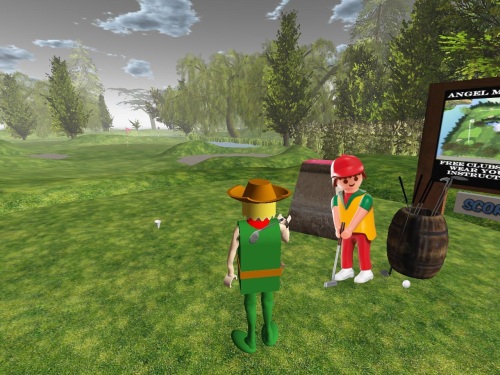 “Have you heard, the news, Douglas? “‘Daily Toilet’ says Picturetown is back on the map and humming.”

“Distractions,” offers Douglas Blue Feather, the local sheriff ’round these parts. “Us Angels should stick to what’s good for us. *Dreaming*.”

“But reality beckons!” Douglas hated when Yellow Purse Kimball shouted during a game. And this is the first hole (!). What will the 8th, the 11th, the 16th bring? A noisy snack of Big 60 cookies in assorted vanilla, chocolate, strawberry packed away deep in his golf bag? Gum chewing; finger snapping; whistling; singing, even: “Singin’ in the Rain”? Weatherman Fox Stet, a professor of biology over at Camden Yards, forecasts a good chance of storms this afternoon. Per usual in early May or June or whenever the f-ck it is now. Along with the wind of course, the constant evening billowing.

“Better finish by 2,” Douglas says, looking up in the skies. Clear sailing so far. He glances over at his golfing partner already swatting away. “Maybe, Yellow, we should save the putting for the actual green and not the tee.”

“Hey, I’m just practicing!” The shouting again. Oh looky, there goes the first piece of gum into his mouth. It was going to be a long round of golf. The only reason he’s doing this in the first place is get the scoop on Picturetown, because Yellow Purse Kimball has inside stuff. But he mustn’t be too obvious about the prying, the digging, the scooping. “Vanilla and chocolate,” he imagines saying to Don the ice cream vendor between front and back nines. “And top it off with, let’s see…”

“Strawberry?” guesses Don, still 9 holes away in dream-reality but already scooping away at the brown and and then white filled buckets below him in his imagination.

“This is absolutely the longest f-cking round of golf I’ve ever played, Douglas thinks after 2 pieces of gum, 5 whistles, and 15 hums by his count. And we’re only 1/3 the way through! Don and his delicious, home made ice cream, sorbet and sherbet is still 3 holes away. Can he hold out for his just reward? But he’s already got some scoops, so to speak. Information, that is. White Palace, Toddles the precious precocious child stuck exactly halfway between 23 22 and 22 23. Male and female. This information definitely didn’t come from the “Daily Toilet”. Inside stuff indeed. He looks over: at least Yellow Purse is on the green while putting now. Can you take any longer to make a shot? Oh, there’s goes the humming again, the stalling. He’s recalculating his line. Might as well dream about ice cream again, pheh.

“Mabel, I mean *Ruby*,” Jay Woodhull suddenly uttered after Ruby got off the line with Shirley Boot (the API visit was on for tonight!). She was just about to teleport down and out of here. “We, Marty and I, have had a talk and we’ve decided to show you who we really are. Deep down beneath.”

Please don’t do that guys, Ruby thought to herself. Please please don’t.

“So deep,” Marty added, out of breath from all the moving about apparently, “that we almost *forgot.*”

He changed in mid rock, Jay along with him. 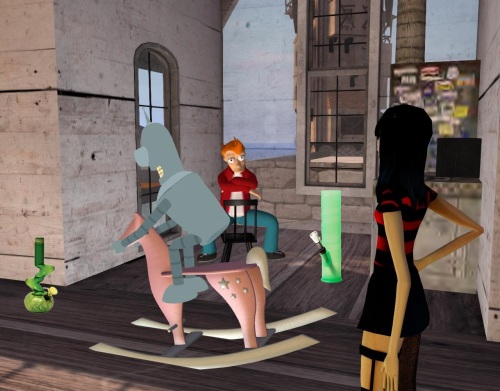 Young Ruby had fallen asleep at the dining table while reading Mabel’s Diary No. 3 again. Such fascinating stuff: Fishers Island and New Island are one! “3 palms and the truth,” Mabel kept repeating as a mantra within. And she *must* visit this Artist Point Interactive, where she left off reading before cutting the z’s. Maybe, perhaps… tonight? But Mabel also warned never EVER go in there alone. What were those two potheads thinking when promoting it as a so-called up and coming New Island art gallery, hmph? Didn’t they understand who was secretly the center of it all, this Hazel or Mrs. Hazelhurst or Mid Hazel? A powerful witch, and one not to be f-ck with according to the book by any means. That’s yet another reason this place should be named Fisher or perhaps Fishers Island overall. Ruby was the chosen namer of Queen Mabel. She and she alone had that power, that ability. But when to affect it?

Ruby checked the clock on the wall: 11:46. I wonder if that interesting tomboy lady Shirley Boot I met this morning when she came over here to see the potheads might want to accompanying me? Maybe I’ll give her a ring. Yes, a ring. 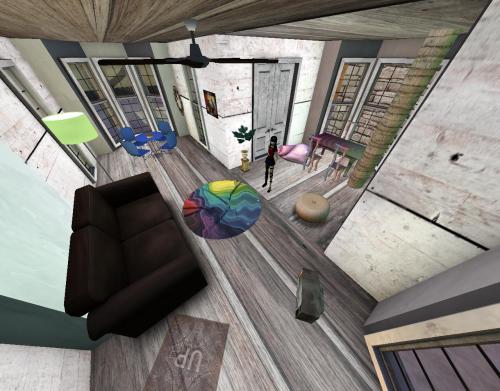 Now where was Mabel’s phone in this place? Oh yeah, she remembered. Upstairs now. With the potheads — their new business line until they set up something on their own, out of *our* house, pheh. She hated going up there…

Annie spotted the phone. A quick call and she’s out of this madhouse.

Shirley Boot returned to Yd Bay on Wednesday, ostensibly to sail her FB Lollygagger Raft 2.0 around the northern shore of New Island again. Secretly she was hoping to see the nice nude man again which caused such a different kind of itch in her the week before. But to her amazement, little Yd Isle out in the bay where the man had been standing was on fire today!

Shirley pondered calling the island’s fire department but then decided against it. Yd Isle was surrounded by water, of course — the fire would not spread beyond. And the 3 linden palms, the only things growing upon it as far as she knew, were obviously already goners. So she just sat on the shore and watched, but the flames never seemed to die down. Eventually she became bored and went back to her house on the other side of Mt. Sondra. She didn’t mention the spectacle to her parents for fear of getting in trouble.

Today Shirley scanned the morning edition of the “New Island Gazette” for any news of the fire. Nothing. Did anyone even *notice*? she wondered, sipping on Earl Grey tea and taking another bite of one of those fresh cheddar biscuits brought down by nice neighbor Ms. Frame last night. She read the paper more carefully, front to back and then back to front. Still nada on the fire, but the blurb about New Island Studios she kept running across then began to strike her as kind of queer in itself. 3 palms again  — did these stoner guys Marty and Jay get the inspiration for their blurb’s isle from Yd Isle itself? Maybe *they* would be upset that the trees had burned down.

So on a whim, Shirley Boot decided to give fledgling New Island Studios a ring, since the number was right in front of her. 709-576-8220. Leaving off the area code since the call was local (in fact, all of New Island belonged to 709) she pecked the number into her smart phone.

“Hello, ‘New Island Gazette’,” a friendly female voice on the other side of the line spoke. Shirley hung up. “Stupid stoners,” she muttered. “Gave the number of the paper in their blurb and not their own business.” She decided to make a hike of it this morning and go directly to their office, since she knew the physical location. Behind Bumpy’s Ice Cream Village, near the center of the island; not more than a 15 minute walk from here. That way she could pick up more pot spliffs from that Corsican gal Laverne Glam who should be working at the Village today, and also thinking a, um, business warming gift, ha ha, might be appropriate for the likes of two self professed stoners. Then Shirley considered:  Maybe it was just the pot the day before making the bay isle burn, hmm. But she was pretty sure it wasn’t. Pretty sure… 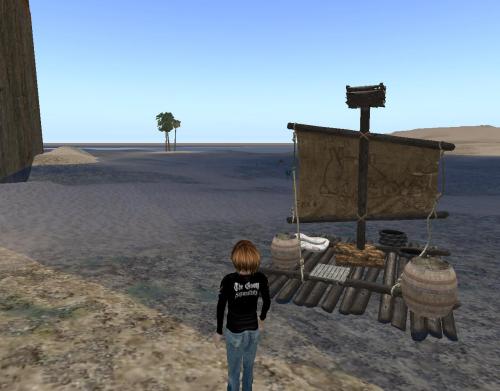 … until she revisited Yd Bay on her way over. The 3 palms still stand! It’s as if nothing had happened, nothing at all. And perhaps, she decided, it hadn’t.

Still, a visit to Bumpy’s Ice Cream Village and then New Island Studios seemed to be in order since she was already about halfway there.  And Shirley needed Laverne’s spliffs more than ever now!

Why did the graphic artist we hired — this Hazel or Mid Hazel or sumtin — turn Fisher Island into New Island, Jay Woodhull thinks later while enjoying his nightcap spliff and staring at Wednesday’s edition of the “New Island Gazette”. He looks at the inside curve of his left metal hand, spilling some pot ashes on the blurb below. “But they got the palms left, um, wrong — three instead of four, hmm.” The palms began to smolder, and Jay gathers enough sense to snuff them out with his other hand.

“What you writing there b-b-boss?” asks Marty Claflin, formerly known as Pot Head.

“Oh just some ideas about our business,” replies Jay Woodhull, formerly Sheriff. The Sheriff. But his law upholding days are over for now.

“Oh, I doubt it. She has to sing at the Cult of Oo’d in Collagesity tomorrow. She told me she’d most likely be staying over there tonight to save prep time in the morning.”

Jay puts down his pen and stares at Marty. “Why’d your studder come back? Hey, look over there… out the bay windows,” he says suddenly while pointing. “Someone’s coming.”

While Marty’s head was turned, Jay took the opportunity to knock the crap out of it with his metallic left hand. “OW!” he yelled, but with no studder. Jay’s quick remedy had worked.

“Thanks,” Marty managed after a moment of rubbing. “I think.”

“No problem, Marty.” He began writing on his notepad again. “Now about that business plan…”

Meanwhile in Mabel’s duplicate (and original) Scarlet Creative Sylvia House in Collagesity, she sits on her DaD Design knitted pouf freebie and stares out the front window into the woods, trying to spot Unch, an old game. It’s good to be home, she thinks while continuing to peer and squint. Too bad I can’t stay. 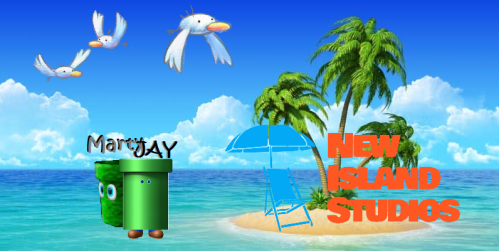 Encouraged by up and coming studios like Swanson’s Gallery and Artist Point Interactive (API), Marty Claflin and Jay Woodhull, two self confessed potheads, have decided to start a parent enterprise for New Island studios as a whole. You buy into the company — NEW ISLAND STUDIOS — you get promoted in the biggest and most popular Second Lyfe art venues, plus even off-world platforms like Grand Theft Auto, Mortal Kombat, and Minecraft. Way to go Marty and Jay! Here’s wishing you guys the best of luck in your new (island!) business venture. We’re sure to be hearing a lot more from these two wacky stoners in the coming months and years. Decades! Call 709-576-8220 for details.

It’s time for Improvio to strike out on his own. 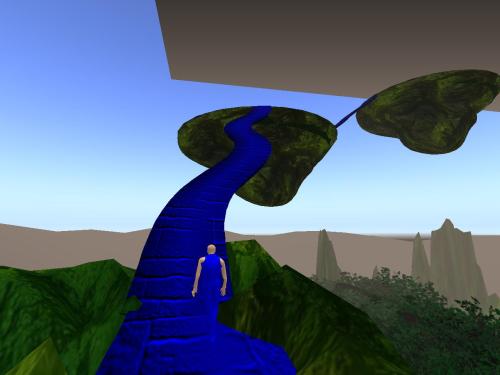 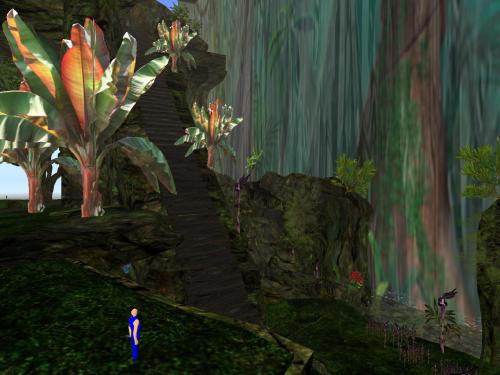 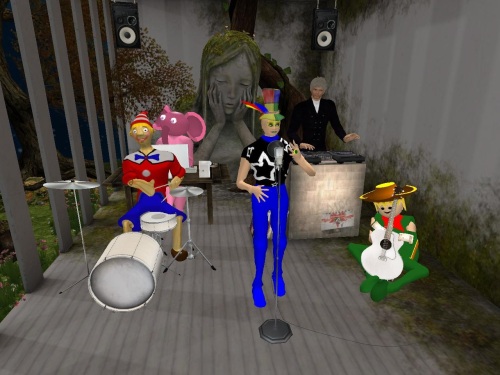 “Giant Jiff,” Buster commands, “this morning we need to dismantle this block of houses and attached tiny village. Location change — other colorful houses used for the set, you see. Also: phone Bettie up and tell her we need to start preparing to get the heck out of Dodge. I have to take a shower.”

“Shoot,” exclaims the overhearing sheriff down at Tiny Towne.

Teebestia sits on the southern edge of Olde Lapara Towne, just beyond the Magill House, and looks out from whence she came: the Atoll Sea. Will she return now to life beneath the waves? “There’s always Story Room,” she says to herself, trying to stay. Teebestia ponders some more. “Yes, I’ll go in that direction next.”

“So long for now, Omikron City.”