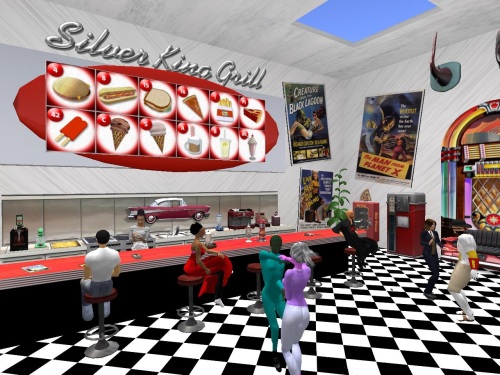 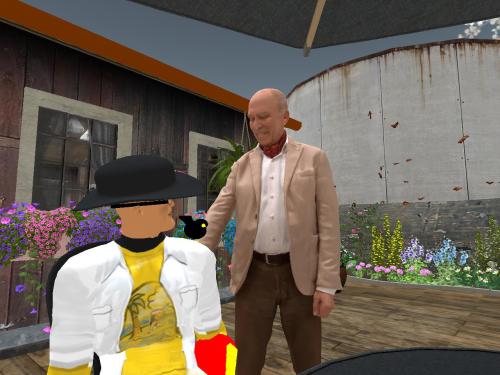 “That’s not a bird,” old man Fred said, standing uncomfortably close to me, creepily close even. “That’s a *caricature* of a bird, like a cartoon.” He leans down and speaks to the cartoon directly. “Aren’t you Blackey!” as if the bird perched on my shoulder was hard of hearing. Quite the opposite! He’s scolded me many a time for talking too loud to him when he’s right there, not 6 inches from my mouth at any moment. What would he do to Fred now? Peck his eyes out? Finally fly away and never come back? What a fine mess that would put me in, because I’d have to go out and find a *proper* looking bird to take his spot. Because I doubt that such cartoon birds were still available — on the marketplace or anywhere else. Just like my dear old pops Spaced Ghost, the outfit of which was retired long ago. So: 1/2 of me. And probably the other half — originally Linden Boy Next Door in some version — as well. We’re all antiquated. Maybe we should *all* fly away somewhere over the rainbow or something. Wait: tried that already. Hucka D.’s White Place in De Skies; the equivalent. Yet here we are again, talking to Fred, listening to his criticisms of Blackey’s looks, and, by extension, mine. Yes, Blackey and me will never part ways. I’ll see to that. And Hucka’s back too, but more woman and less bee than ever. No antennae now, even. 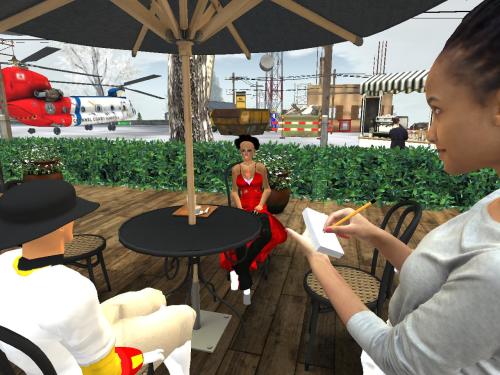 And Tulsa is waiting on us, not Omaha. “How’d we get over here, Hucka?” I ask her across the way.

“Define ‘here’,” she replied, and ordered a salad with no lettuce and extra ketchup.

“Just nuts,” I complained, and then they brought an assortment. Tasty! But it still didn’t answer my question. Hucka D. spooned a big bite of red looking salad into her mouth. STOP

GO Creepy Fred was gone. Hucka D. spooned a big heap of green salad into her mouth to my left. Omaha spilled coffee in my lap after I politely asked for it, ow ow ow! Point made. There was a reason we were there instead of here, I get it.

“I get it,” I said aloud to Hucka, still holding my groin.

I sit down, trying to gather some local color. I brighten up the place (smoky blue sky).

Tulsa was taking orders from a white couple nearer the front door. I could tell there was some tension — a bit, but noticeable, at least to me. Peggy and Wanda played with their cell phones at the table nearest me, not engaged in conversation at the moment. I tried to glance at what they were looking at, Peggy at least, who had her back to me. Some site about jobs — they were looking for jobs in this town. They were tense. No: just more focused. The other white couple in the room: well, they were all just kind of normal.

I decided to manufacture a friend for Wanda and Peggy and have him sit at their table with them. Let’s go with Chet. Chet was dressed to the hilt for the holiday season, anticipating December 1st like it was his birthday or something. Wanda had known Chet since college. Peggy was Chet’s girlfriend for the moment, at least until he dumped her for Phyllis. But that was in the future — no more going forward into the future which is also the past. We are *here*. Chet walks up. Ah, another core — not me. I can stay seated; I can still listen in.

Wanda giggled in Peggy’s direction after he sat down. “Isn’t he so cute with his mask and all.” Of course I’m wearing a mask, thought Chet. There’s an f-ing pandemic going on. He had the urge to leave. He wasn’t being respected, like he was some kind of Christmas dupe instead of their friend. He decided then and there: he was going to start dating that girl Phyllis he’s had his eyes on as soon as possible, as soon as he gets out of here. He’ll give it 30 minutes. Peggy didn’t say anything back to Wanda’s little remark. She kept playing on her phone. She wished she’d brought a mask herself now. She didn’t want to get sick just before the holidays (!). Chet was thinking about the holidays, in contrast — all along. I’m going to celebrate it like it’s f-ing Halloween, Christmas and Easter rolled into one (!), he decided on Thanksgiving Day, watching Uncle Bert come down with it afterwards. Then Aunt Jermima. Then Cousin Lute. And with a new baby’s sex to be decided — they weren’t up for it! Uncle Bert never got back up. He was 82 and more susceptible than the rest, having married beyond his age. He went to the emergency room; said his cat bit him. Infection spread; virus weakened the immune system. Gone in 2 days. There was a wake but Chet didn’t go. Instead he went upstairs in his house and decided to wear Christmas garb for, I don’t know, until Arbor Day maybe. Yeah, he got the tree out as his mother demanded, but he got a lot more out of that closet. I can’t really say he snapped, because about a 1/3rd of our great country is bonkers now and at least he wears a mask in public places. Tulsa was uncomfortable with the white couple she was serving because they also weren’t wearing masks in a public place and it put pressure on the owner to say, “don’t wear masks,” while serving them; “makes them uncomfortable and put-off,” he decided. He’s gone over to the dark side, Tulsa thought. She has about 30 minutes on her shift. Won’t be coming back, she punctuates the post. 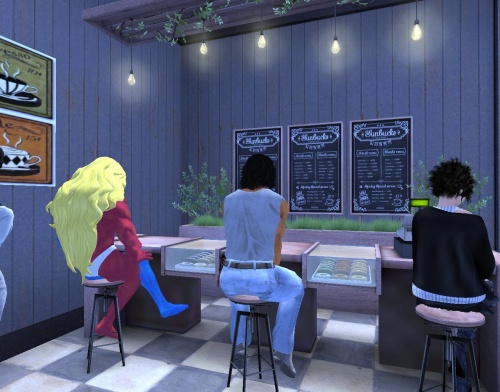 I am both the contrary motions of male and female in one body,” he spoke over to his brother-lover Rock Ramby, who was sure to go everywhere Gill Alex went. What a lamb. They were on vacation from Misty MO, like last year around this same time. “Always hurricane season for a coastal town,” Gill Alex groused about the location choice again. “Can’t go to the beach. Can’t lay out this gorgeous body on a sun towel for every passing boy and/or girl to ogle at.” He reflexively flexed his blue toned arm muscle with this for Rock. “Hard as *you*,” he added while patting it, making his significant other grin. “Shut up,” he waved Gill off.  He knew he had to take certain kinds of pills now to be a serviceable lover. And Gill Alex liked to rub it in every now and then — when the opening occurred. They were playful and carefree like that. “*This* one,” — he flexed the muscle in his red arm now — “not as strong. Weak. Limp, even.” “Alright, knock it off Gill. Or should I call you… Alex.” Gill Alex shut up, then. He didn’t like his first and last names switched with each other, not one bite. He took another bit of his butterscotch topped doughnut in front of him so he could bite his tongue. He knew he deserved the come back. Then he got over it. Just that quickly. They were… well they were who they were. More Popeyes.

Speaking of which, Rocky Ramby was about to reveal to brother-lover Gill Alex why they were *actually* here.

Tulsa behind them was taking notes all the time. 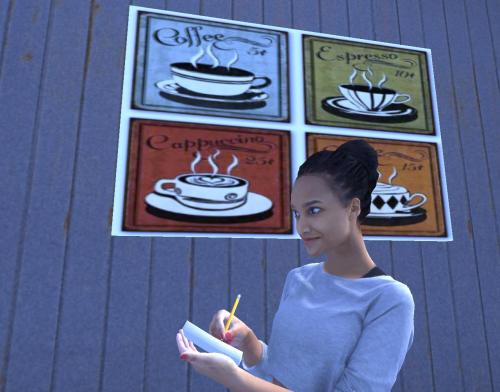 “Oklahoma,” he started. “Oklahoma, then Olive.”

“Confederation?” expressed Gill Alex reflexively. When was the last time he’d thought about *that*.

They were here for the *eye*.