House 39 just up the hill, up the stairs.

Heading south on Cherry Avenue away from John Lynndon. He’s swiftly becoming a blast from the past. He’s one shot from slipping around the bend and out of sight (man)…

… and at the same time the very tip of Cherry Avenue’s first “island” comes into view from the opposite direction. 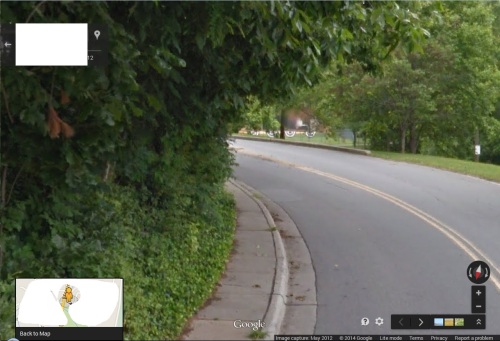 One snapshot closer: island in plain view. John Lynndon now totally gone in the other direction. Two boys playing basketball in Earl Weaver Park also first come into focus, also our first good glimpse into the park from this direction. Like I’ve said, House 39 is directly associated with EWP, and the owners of the house probably also owned this land in the first part of the last century at least.

Basically we’ve exchanged John Lynndon for these basketball players in our trek south on Cherry Avenue in Google Maps Street View. As the former goes out of sight, these two come into sight, along with the island.

We are already seeing parallels with what happens at the *southern* end of this same avenue, reviewed in the “Found Art Event (!) 02” post below. This is, in fact, the start what can probably be seen as the *second* such art event of Cherry Ave., north mirroring south.

After being hidden for one photograph, the basketball players come back into view just as we pass the northernmost traffic island of the avenue. More islands appear down the street now. 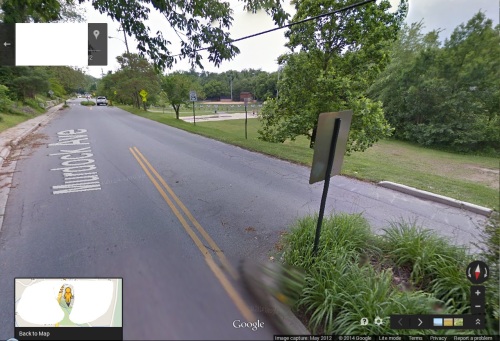 Next photo: the boys unknowingly pose below the lower right corner of a speed limit sign.

2 photos south: boys entangled in a second road sign. Are they the occupants of the seesaw? They are at least similar players in the park to these abstracted seesawers. Speed limit has lowered from 25 to 20. 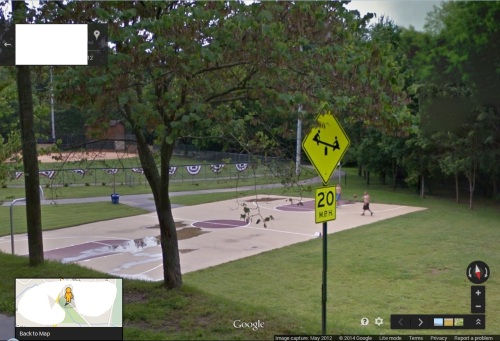 As we pass 2nd large traffic island of Cherry Avenue still heading south, the players disappear, just as they appeared when we passed the first large island.

We see them fairly clearly one last time several photos down. The man in the darker trunks has now moved off the court and into the edge of the woods for some reason. Is he retreating back into the shadows? 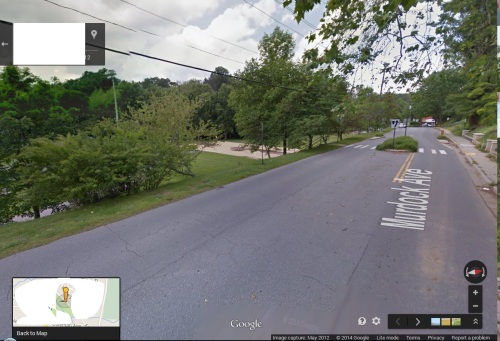 In the same 360 degree photo, 1 of 2 paired runners first appears clearly to the south. Another exchange has seemingly taken place.

I’m still analyzing the motion of the 2 runners, moving backwards as we go against the grain of time in continuing to head south down Cherry Avenue. At one point, they seem to frame the edges of the last large traffic island in the northern part of this street.

And then they first appear in Google Earth Street View as we enter Cherry Avenue from Norwegian Wood Avenue to the north.

But if we just head down Cherry Avenue without this small detour, the runners seem to vanish as we pass the second to last large traffic island (of 4). I’ll have to go into details about the islands in another post.

My initial theory is that with this disappearance the art event has also ended. All that’s left is to figure out what’s going on with it, and how and why north mirrors south.