We come to “Comparative Heights” now, number 24 in the Boos series. Just in terms of pure aesthetics, I believe this is one of the more successful Boos works, although I don’t think it’s quite as deep as the previous, “uglier” collage (“Goodwater Goodland 03”). Let’s dive into an interpretation and we’ll see.

At the center of the work is Waving Truman again, having appeared in a Boos miniature already. Here he stands at the end of a row of historic Tungaske baseball players, 12 in number and lined up in terms of relative heights. Truman is at the high end, and the only one that can be said to actually stand the road itself (Tungaske’s Q Street) and not in the grass off the road. He is the 13th, relating him to the Christ figure. On the opposite end from him appears the smallest and darkest of the figures, perhaps in shadow. He could be Judas Iscariot, betrayer of Jesus, in this scenario. In reality, he was probably the baseball team’s manager or coach. Waving Truman is also set apart from the others because he appears in his true colors, the rest being sepia toned. In the road to his right is a miniature version of the likewise sepia colored Fal Mouth Moon Gallery, not in correct proportion at all relative to him, in seeming opposition to the collage’s title. Above him is another sepia character, and also one we’ve seen before in a Boos miniature: “Falling Dorothy” from an early Kansas scene in “The Wizard of Oz”. Here she points to mysterious smoke or cloud writing in the sky that appears to spell out the word “fag” in capital letters, at least according to blog spirit Hucka D.

And speaking of Hucka, we also find him in the present collage beside Truman in his true Second Life form (“Hucka Doobie”), and not as a doll as we’ve seen before in Boos collages 11 and 19. We are moving into something truer — Truman. And in the background, standing in the grounds of the old Tungaske church and school we’ll see more of in coming collages, are two giant green, alien type figures both removing their heads. Hucka Doobie appears to be staring toward them. We know from the Falmouth series that these are 2 “Beemen” who show up in a Whitehead related collage here: 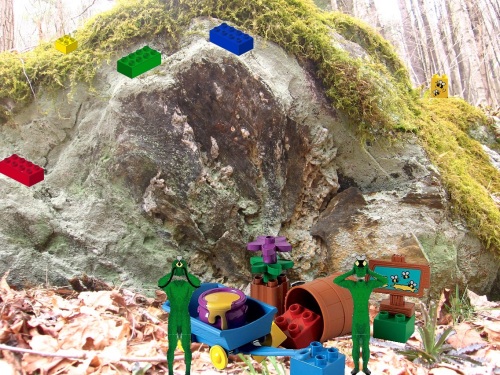 More bee imagery, then. The mirroring “fat” and “thin” figures also hark back to the 2 Roger Pine Ridges of Sam Parr 03 that also reappear in the final Falmouth work. LINK

So to an interpretation: The setting is Tungaske’s Q Street, right beyond where it meets the top end of Atlantic Avenue coming from the south. Maybe the north-south line of baseballs players relates to this avenue, then, and by association Pacific Avenue running parallel to it. I’m remembering that Waving Truman appears in a miniature featuring a Pacific Avenue location. And Hucka Doobie below him is a miniature himself in comparison to other imagery in “Comparative Heights”.

“Comparative” contains the same number of letters as “Collagesity”, or 11. 18 total, then, for both “Comparative Heights” and “Collagesity Heights”. We may return to that.

The “World of Collage” gallery is now finished in its initial stage.

Added vegetation all around the town’s circular and partially buried rr. Only 1 prim. Thanks Aley!

Then I’m experimenting around with changing out the Town Hall with the old Collagesity Diner, which would double as a museum. At the same time I started filling in the bottom of Castle Jack with mainly flat figures…

… but I’m thinking now that the *castle* may instead be the town museum, and so the town hall might reappear. And I believe I have a sign. I think it’s a go.

I’ll finish up the Boos Interpretation posts in about a week. I should have time to create one or two of those tomorrow.

Diner may be able to stay — moved Baker’s house west about 2 meters so the two wouldn’t interpenetrate each other. We’ll see. 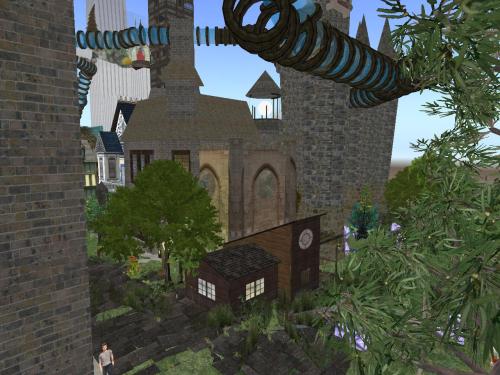