Let’s temporarily skip further discussion of “Comparative Heights” to move to the 25th Boos collage, called “Bitter Rivals”. To me this seems to be an even simpler work, not far in spirit from the miniature but larger in overall scale. The scene is clear. We have an old Tungaske baseball team returning to the right, although I’m not sure we have the same people represented. To the left we have the same picture of the team blotted out by red-violet flowers that appear to be pansies. These are the “bitter rivals” of the title, fronting a beautiful Tungaske sunset seen from approximately the same location as that of collage 14 (“The Unloading of Bigfoot”), or on the western edge of the town very near the artist’s house depicted in collage 11 as well. I believe those are even some of the same trees represented.

We’ve already associated this artist with Lisa Simpson or “Lisa the Vegetarian” through evidence gleaned in collages 19 through 23. Appropriately, we have the return of Lisa Simpson for the present collage, appearing in outline form between the two “rivals”. But, importantly, the outlined is doubled through inversion. Lisa cannot side with either team but, like the setting sun behind her, has to remain neutral. As Lisa has also been directly associated with a setting (or rising) sun in collage 22, we must assume the same here. What are the rivals? Since the flowers are culled from an advertisement for the Tungaske cemetery, they represent the dead of the town. And since all the players to the right are in all likelihood deceased now, the collage weaves a tale of past (living) colliding with present (dead). Tungaske is a dying town in that the population slowly seems to be trickling away. Again, the dead threaten to rule, vanquishing or “blotting out” a modern rival, perhaps perceived as johnnies-come-lately. The fight is between past and present, with Lisa standing between the two.

The heroine of our story does not appear in “Comparative Heights”, but her image is the last I edited out of a final draft for that collage. I decided to include an excerpt from this penultimate version as collage 25.5 of the Boos series which I call “Q Girl”, bringing Lisa to the forefront at last and not hidden. Her signature lemon tags along. 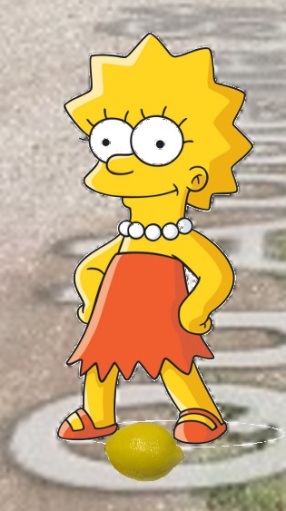 Per the title, she stands in the “Q” of the delineated “Q Street” from Google Maps’ Streetview. Given that Dorothy’s upraised arm in the overall collage points directly at mystery writing in the sky that seems to spell out a more derogatory word for “queer”, we can also assume that “Q” stands for the same. This may be a kind of coming out moment for the girl, or a realization at least of her gay or, more likely, bisexual nature. This has antecedents in “The Simpsons” show, where several times it is hinted that Lisa is a lesbian.

In the episode “Holidays of Future Passed”, a montage of photos were featured to show a glimpse of whats to come for the Simpsons family. Lisa is shown intimately holding hands with two women in one photo, then with a different woman in another photo.

I’m also reminded that the flowers in “Bitter Rivals” are pansies, which is another slang word for “gays”.

In alchemy, androgyny is a symbol of immortality, transcendence and totality. It is the triumph over the deceptive duality resulting from the creation of the universe. It also stands for the merging of the selves, the triumph over mind and ego, and the accord between sameness and diversity, particularly duality.

“Q Girl” provides a summary point for the floor 3 collages of the virtual Boos gallery in Collagesity now, a period to their sentence. But we still have one more, smaller floor to examine. Lisa leads us upwards. 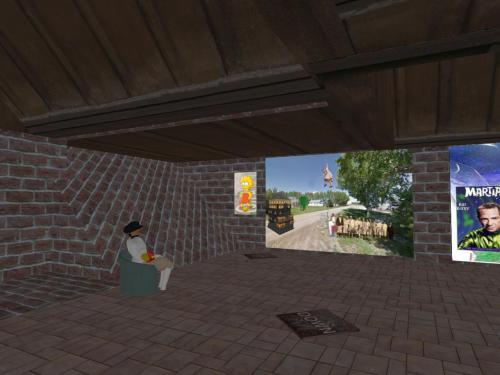