After talking with Space Ghost for an hour, Baker Blinker decides she really needs a quick swallow of a strong drink before heading up to see about that stupid Ancient again. She was hoping he was snoozing away, although that means he’ll be awake and cranky — *crankier* — in an hour or two. Best he’s still watching tv, she rationalizes. She’ll pop up there and then pop back down here to finish her drink if all is well.

In walking into the bar just around the corner from her house (formerly Baker Bloch’s house, of course), she was surprised to see Furry Karl behind the counter. 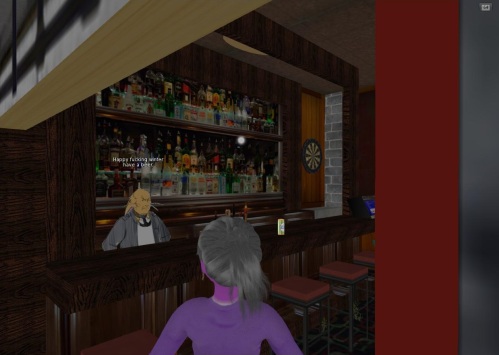 “Karl, I thought you went away on an extended vacation. I was just about to help myself to some booze on the house, hee hee. Your vacation got cut short? And there’s Karoz. Hi Karoz.” 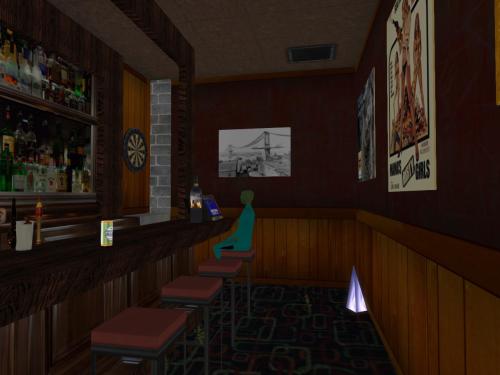 “Hey Dream Boy,” prompts Karl, “a pretty girl just stepped into the bar. Say hello to her. You loser.”

“Wha-what?” Karoz pivots his head. A dream appears at the door. “Baker Blinker,” he thinks. “Why haven’t I noticed you in this way before?” He manages a weak “hi to you” back at her. 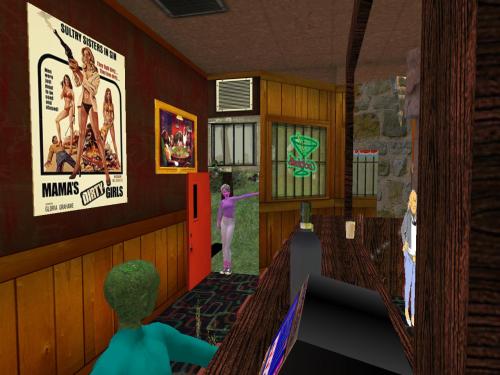 Turns out Karl never went on a vacation. He doesn’t have a full furry cousin named Crash. “*Second Life* crashed last night,” he explains to Baker Blinker, almost halfway through her gin and tonic now. “We *all* winked out for a bit, then came back. I remember going to the white place again, the place that baker b. and Hucka D. talk in a lot of times. You know what I’m talking about. The Palace. The Nothing Zone. That’s where I went. How about you?”

Baker Blinker had to think hard. She wasn’t in Second Life much at all any more, although that’s rapidly changing. “I honestly don’t know. How about you Karoz? What effect did the crash have on you?”

Karoz was tongue-tied. I mean, she was directly talking to him but all he could do was look at beauty. 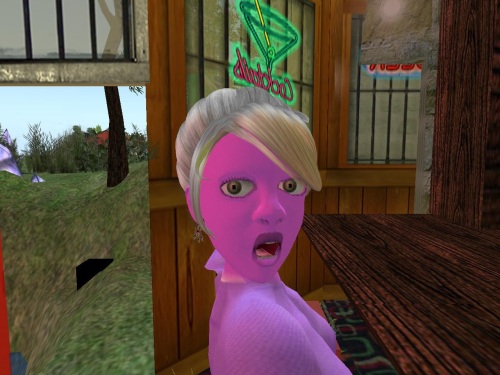 Venus de Milo kind of stuff we’re talking about here. She could have been asking him to go fuck yourself for all he cared. He just focused on the movements of the mouth, the hair, those eyes. “I’ve got to get myself back home,” he thought. “I’m in a state!”

“Tennessee or Kentucky,” he blurted, and then fell off the bar stool.

He was in a cast for two days, which is a long time for Second Life. Baker Blinker tended to him while he was laid up. They shared nightime stories about the old days of Jeogeot. As he could, he helped her with work The Master always had lined up in a queue. There was the “Uncle Meatwad” list to deal with one day. I’ll get to that soon, perhaps in the next post.

One response to “Dreams”