Writer/director/producer Baker Bloch of the Collagesity Blog Series filming a test scene where newcomer Lockfry (played by Devil Dave of Crabwoo, etc.) is about to enter an enlarged version of the magical Blue Feather Cube bordering Central Stream, never to be heard from again in the town. The scene was later cut in favor of… 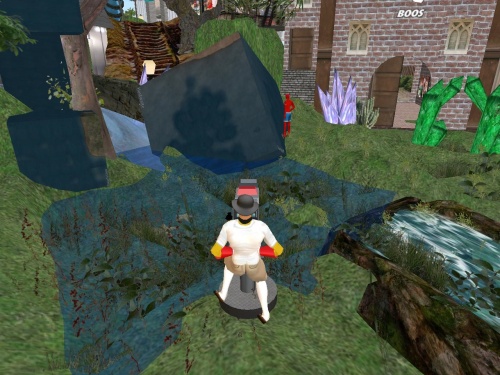 … Lockfry taking Karoz’s place in Castle Jack under the red lights (his favorite color, after all) and allowing the latter to return to his 2nd floor Bodega market apartment and take back stuff formerly stored in Furry Karl’s bar (such as pictures of his parents, his now empty parrot cage, and so on).

Baker Bloch envisions Lockfry working part time in the bar, gradually saving up his money so that he could buy this travel trailer and set it up on the extreme western edge of town above Confluence Pool. This way he could stay close to Baker Blinker — Bloch wants to keep the romantic triangle between Lockfry, Ms. Blinker, and Karoz strong in future installments of the series.

Eventually, Lockfry might build a house like the below one in the berg, complete with a galloping porch horse.

Bloch even tested out the idea of the red being constructing a whole castle where the Toxic Art Gallery presently sits. He could use a steampunk balloon ship to travel about, careful to avoid colliding with Collagesity’s network of sky tunnels.

But the most practical and believable of the end options, for now, seems to be the travel trailer. Baker Bloch revises the script to say it just mysteriously shows up one day, stocked to the hilt with Krings beer and sporting a tv that picks up all the local cable channels.