No one was at the Blue Ant bar so Baker decided to wait in a booth there for Old Mabel to hopefully show up soon. While doing so he took some distant pictures of the nearby Club Aftermath. Especially note the triangular design on part of the dance floor. Later this would mysteriously vanish.

When he returned his focus to the booth, Old Mabel was there opposite him, making a kind of disturbing slurping sound with her mouth. She was quite green all over, including the helmet, which he’d learn the story of a little later. Short of stature; younger appearing than expected. He waited for her to talk, but she just sat there, nursing a screwdriver apparently purchased at the bar while Baker’s attention was elsewhere. 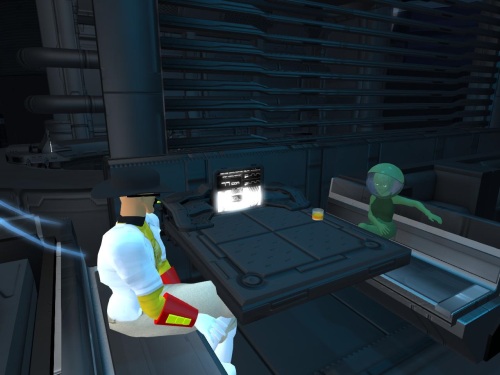 Baker withheld his tongue. A minute later she started, and the pace was rapid. “Not much time sir,” she blurted, and took two quick breaths. “Listen quickly. 32 is the place. I know that now. Got caught dancing in the other apartment. Only two. Stark chuckled because I was a pretty girl. Disguise worked, but no book, no table. Don’t dare look in other yet. Let memory die away. Pretty girl vision fading, fading….” She tailed off, and started to look disinterested again. Was she waiting for a reply?

“Who’s Stark?” Baker ventured, but no answer. And then she was gone — teleported out. Baker subsequently heard steady footsteps behind him, approaching from the right. Dare I say: threatening? When he spotted the person and his long sword, he teleported away as well to a supposedly safer place. Returning about 2 minutes later at the same location, the tall, long haired man was now on the walkway across the bridge from him, pausing to peer into Club Aftermath. He then continued to walk past the club and neighboring red hued establishment (ReaktOr, seemingly another dance club) and then across a second bridge back to the same walkway as the Blue Ant was on. But instead of turning toward the Blue Ant again, he went the opposite direction. Baker took a snapshot of him after he had scuttled down the stairs. Is he some kind of guard? Baker didn’t expect such a vigilante style presence in the dying town.

After he had stopped distant-following the man with the sword, Baker reviewed what Old Mabel had said. 2 apartments? 32? He’d seen no Roman numerals adorning any door or structure in INSCO. Yet there was that place on the west side of INSCO Central with a white design over the front door resembling a house number. He’d actually landmarked a point in front of the door earlier during his roamings. He returned. 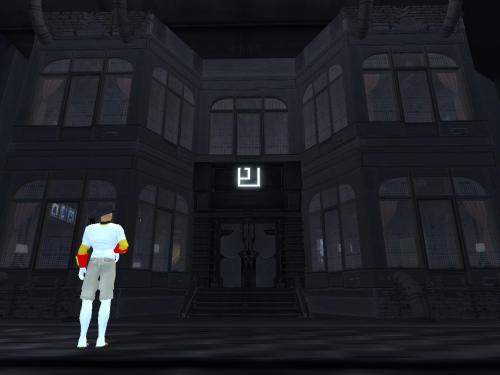 Could this be Old Mabel’s 32? There was only one way to find out.