Baker restudies Boos collages 07 and 08 for more clues about Wheeler and her Table. 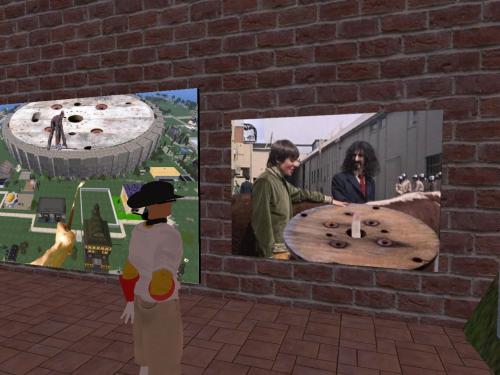 “That finger is pointing right at Zappa,” he murmurs. “12:01. Davy Jones is the pre-marriage David Bowie, too white noise and needing more black ties. Like Zappa (also) said to him in this collage, ‘you need to work on your music more, Davy Jones’. And he could add here now (understanding that Jones is Bowie): stop focusing on what other people want from you and turn to what *you* want. Develop the music itself. You have that leeway now. You do not need money. We’re not only it in for the money.” He smiles… 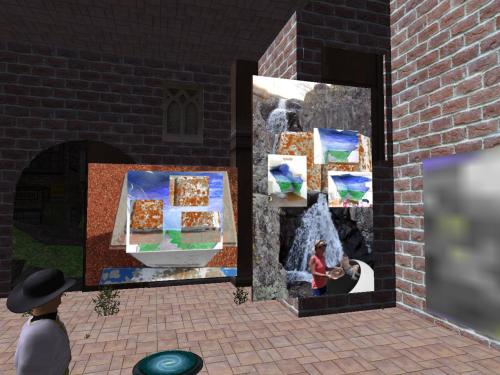 … glances at the last two collages on this floor… 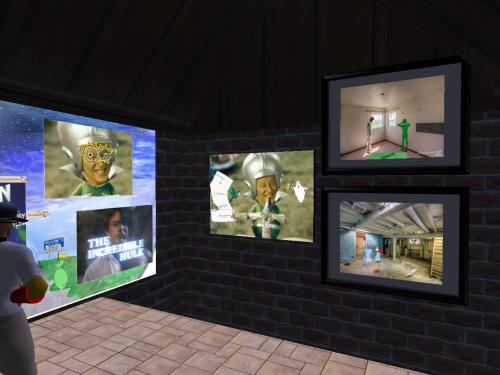 … and teleports two floors up to examine another collage he had in mind. Boos 22. “There’s Hummie,” he begins again. “The Dart… that ran into The Mouse. Drug. Gas.” He was free associating. “Digesting Boos (fish) like I’ve been trying to digest [the Boos] collages. Martian. I suppose I’m a bit Martian now because of my visit. Things rub off on you. And now I have *Old* Mabel… must remember not to call her plain old Mabel any more. That’s in the past. She’s all grown up now. The equivalent of being 13? Not 12 Oz Mouse any more? Carrcassonnee is shrunk. I need to visit her.”

And then up another floor to the final Boos gallery room with the last 4 collages. “The polarity displayed within is still important and relative,” he says to himself. ‘The Big Book of Rust’ in two halves.”

There’s no solving it tonight. He needs to talk to Hucka Doobie. He meets her at Perch again.

“He was just here,” Hucka Doobie says upon manifesting, then sees the teleport offer to her left. “There he is.”

“Look Baker Bloch,” she starts, “that ball representing me is the same size as my hand.”

“Well let’s just twirl around the table so it’s positioned right in front of you. Then we can maybe finger this out better.”

“Right. Hold on. I forgot that Baker Blinker rezzed some of the objects so I’ll have to whirl ourselves around instead in these chairs.”

“Okay, so tell me more of how this works, Hucka Doobie.”

“Well… I’m SID’s 1st Oz at The Table. What I mean is that I represent older audiovisual synchs that culminate in SID, all the Oz/Floyd Paradox stuff. The line that began at Dark Side of the Rainbow and, of course, also The Rainbow Sphere and extended forward. SID’s 1st Oz is their baby, their child. But Billfork is as well. And that’s where Wheeler takes over. She is indeed The Bill.”

“She’s reinforced that repeatedly,” states Baker Bloch. “So what is your job at The Table? Why is Salad Bar Jack positioned opposite you?”

“Yes, that would be you (in his position),” she states.

“Yeah. You guys were buds in the discourse of the old Baker Blinker Blog.”

“I suppose all that’s going to come out in Table speak. The whole war of toys against Second Lyfe avatars — your ancient rivalry.”

“It could,” Hucka Doobie considered. Then she corrected something Baker Bloch and everyone else in town had been repeatedly getting wrong. “It’s not Salad Bar Jack, of course, but Grassy Noll. Unless the character has become one with the actor.”

“Interesting,” Baker Bloch says. “Has he?”

“But, whatever, *Grassy Noll* has now melded with Lemon The Beetle. What’s that say about you relative to him?”

“That he is part of The Bill as well. He drew The Bill into the audiovisual synching realm. He liked their humor. They are the Comedy Beatles.”

“Of course. That’s the finger entering the picture. The Bill. The Center. SID’s 1st Oz didn’t really have this center, although there’s a center involved. Just not some organizing principle that could carry us forward into the platinum beyond the gold. SID is gold. Solid gold. Platinum is beyond. That’s Billfork, that’s Head Trip. That’s 4orrin1. Especially 4orrin1. Later it becomes Pretty Bunnies, Waits 4 No 1, Peewee Big, 1 Pink, Empire Strikes Brak, Uncle Meatwad. That’s the first time in your blog I’ve been allowed to say all those. That’s The Bill. Pay The Bill.”