Just then: “Greetings Sikul! It’s Lou. Your old landlord. Come on up the bank. I want to show you this place.”

“Lou?” He recognized the voice but the figure on the foundation platform of the cottage above him seemed different from a distance. “Sure. Just walk up the bank toward you?” 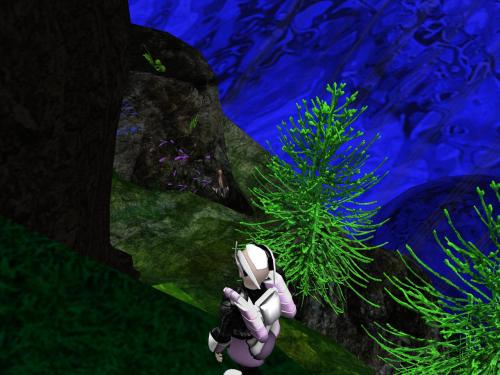 “Yeah, that’s it.” She kept talking while he and Scotty ascended the cliff. “Just cleaning up some industrial waste around this rental. Plane crash up in the hills above here. I suspect griefers. Found the tail part of the fuselage and deleted it but the front remains missing. But you know about crashes. Debris fields.”

He was upon her now. “And before you say anything else, yeah, I’m not green any longer obviously. Spent a lot of time in a cave while you’ve been gone. Photosynthesis powers lost. Might as well be a ‘shroom now.” She laughed liltingly. 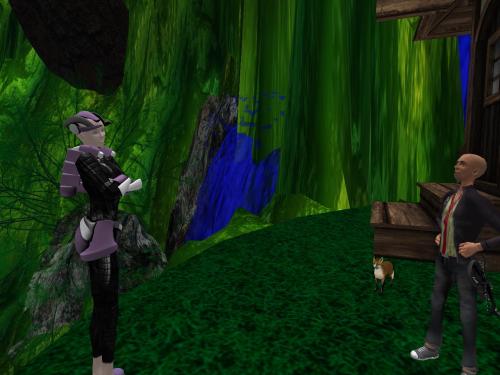 “Well, it’s good to see you whatever. But I must ask right off…”

“Yeah. I haven’t read Ellie’s notecard thoroughly she provided me just a minute ago but: something about damage? Is this related to the plane wreck?”

“No. I decided to move the village,” replied the albino fairy being. “Created a whole doppleganger forest, in fact. Just out of boredom, you understand. Things have got to grow or else: stagnation. You know how it is.”

“I suppose,” replies Sikul, who remained disappointed that the village was no longer *here*. Where does Mrs. Fabershire shop for food now? How about Duncan Avocado just down the river? He makes a mental note to stop by Duncan’s treehouse after this. If it’s still there.”

“Well?…” She waves her hands around. “What do you think about the cottage? Go on inside. Check it out.”

They go inside. “Front steps are a little high,” Sikul complained good-naturedly after walking in. In truth, he didn’t think he wanted to rent this place since the village was no longer accessible above it. What was the point?”

“I’ll work on that,” Lou replied, not offended.

“Nice fireplace,” Sikul then offered, trying to see the positives as well. He looks out at the view through the several paneled windows in the house. “I prefer my window panes not to be as frosted.” He rubs one with forearm to make sure it wasn’t just dirt.

“Again… no problem. We can switch those out. Give you somewhat bigger windows if you wish. Go on upstairs.”

But Sikul was studying a picture on the wall next to the window he had just been rubbing. “That looks like my old home here.”

“It is, actually,” said Lou, happy he didn’t miss the bait. But the comment about the windows lured him over. Lou made sure this one had some extra frosting. “It’s moved along with the village. Need to work on the landscaping over at the new spot, but it’s coming around.” She stopped herself there. “Come on, let’s go upstairs.” The seed has been planted, she thought. 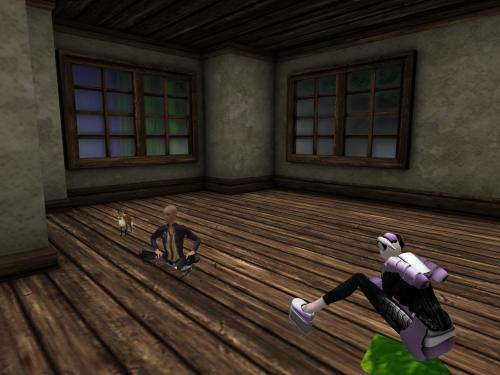 “Well I’m sorry you don’t like the house,” Lou said, sitting on the downstairs floor along with Sikul after they had finished upstairs.

“It’s not that I don’t *like* it. I’m just not ready to commit myself to anything at this early date. I just *arrived* back.”

“These places are hotcakes, in that they sell quickly. You see one empty that you like, you better grab it. But I’ve also made a decision. In looking around this cottage with you, realize how much I like the location myself. I don’t wish to be next to the village and all the hubbub that’s coming with it. I like peace and quiet. Besides… you’re going to need someone to take care of Scotty.” Hearing his name Scotty runs up to Lou and lets her pet him. “We actually go back quite a ways, don’t we Scotty?” He barks, reaffirming this. “Neither of us care too much for caves.”

She raises up off the floor. “So it’s a done deal. You wish to go to the village to be amongst more old friends. I don’t desire to go to the village. Scotty *can’t* go to the village with you through the portal, else you’ll just be sent back to that old arid skybox with Morris and your new friend Wheeler. So he stays here with me. At my new place. He can play with Smile any time he wishes. Duncan’s over there at the new village as well. And more special friends you’ll run into. It’s settled,” she repeated.

Sikul was taken aback by this barrage of ideas/decisions. But he saw the truth in all of it. He regretted leaving Scotty behind most of all, his old friend. They would meet up again, but it would not be for many more months.

The next day he passed through the gateway separating the two forests old and new sans portal dog.