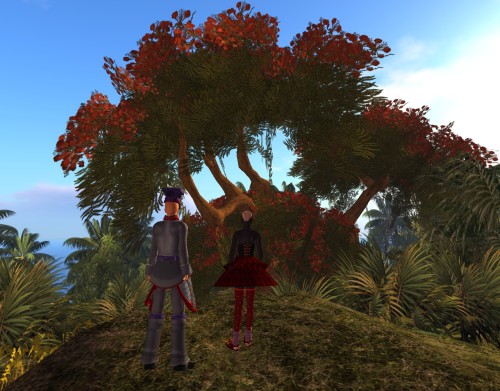 “I’m telling you, Baker. This trees has eyes (!).” Ruby Fantasie turns. “And what is that ridiculous outfit of yours suppose to be?”

“I… I haven’t got any underwear beneath it.” Baker blushes slightly.

“Well. I’ll turn my head until you find another outfit. We must talk!”

“You scared Bob, Baker. That’s not a good sign.”

“Maybe I just took too long to change and he got bored.”

“No, there’s something more. I have other things to show you now.” She points down the clearing. “Geraldine. Counterpart to Bob. Let’s see what she does with you.”

“But she’s not heading toward you still. Sideways at best.”

“What does that mean?”

“Let’s go to the waterfall,” Ruby Fantasie then declares. “Beyond the pool which is sort of a decoy, I suppose. You think: there can’t be another, hidden pool this close to an exposed pool. That kind of thing.”

“We have to backtrack a bit.”

There she is, Baker thinks. I feared I lost her again.”

“The exposed pool,” Ruby Fantasie explains. She turns. “Then over there, behind some rocks: the hidden one.”