Cathy A., natural mate to Marcus Fox Smartville and also a DJ like Grey Scale Kimball, had long dug Elvis White but didn’t know about Elvis Black until he showed up at one of her pretend gigs in Kensington’s Serenityville day before Wednesday. Always with the primmy rose she was, thus couldn’t spin the other record, the dark side this time. Like the South — but they were *barely* in the North now. North side of the middle that is (Hills of Bill/Neutral Zone). But, perhaps: close enough. 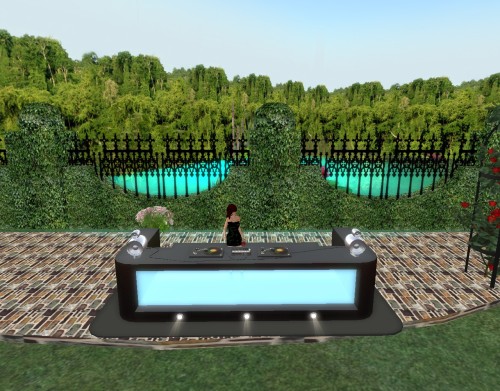 Elvis Black, who of course is our Duncan Avocado in disguise once more, just sat on the wooden bench on the far side of the lawn, letting his presence be known. He didn’t want to seem threatening at all, just seen. Here was a keeper of the portal, he thought from within. Like Marcus before her. Maybe they’re even one and the same, or at least soulmates. I think with the common rose it’s obvious. Is it the *same* rose?

Day after Thursday he stands before Cathy, turning Grey in the process. Exactly east from this spot on the day between Sunday and Tuesday of the previous week, Gabby Truth saw it coming.

“You have lost the West but gained the East,” he spoke, seeing visions in his scrying ball once again. “But, at the same time, you have lost the South, but gained — yes — the North.” He draws back his white, pancaked face from the glow. “Interesting.” He looked over at Elvis Black — black Elvis. “All the 4 directions at once, blabber de blah…”

But they weren’t “all at once,” as Gabby proclaimed. He had himself lost separation of time in his chatty mannerisms. Elvis’ — Duncan’s — losses were 2, the latter nested inside the former. This was not seen today, this between day.

Duncan becomes fully Grey on a day of the week further down from Friday. “I have lost the South but gained the North,” he said in DJ character, staring at the 2 records, spun and un-spun.

Gabby Truth finally remembers to turn off the light in his crystal ball.

One response to “The New Truth”