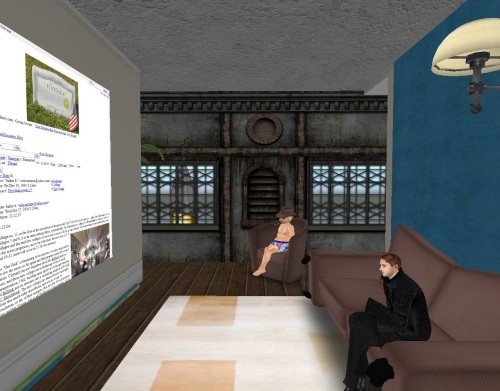 “All (sections) named after fruit?”

“That is correct my fine neighbor.” His voice was mild and youthful; his neighbor’s gruff and aged, countering the babyface appearance.

“Well… if you’re Pierre, as you say, then this town is in for a lot of turning upside down soon. Do you plan to bring back Carr?” Carr was short for Carrcassonnee, the former, alien ruler of Collagesity/7 Stones before the 2016 coup.

“It all depends,” he replies to the babyface man with the gruff, aged voice. “Tell me all about this Wheeler.”

“Damn eyesore it is,” Mr. Babyface suddenly declared, pausing in his spiel about present town ruler Wheeler. “Look at that thing looming up in the air.” He indicated out the window at the boxy Edwardston Station Gallery, the skybox everyone in town is voting on whether to keep. We have two naysayers in the matter sitting here in Mr. Babyface’s lower floor of his Kidd Tower apartment. Mr. Babyface decided “no” the minute he set eyes on the cube; The Man About Time’s choice came a little later. And now he had “Floydada.”

“There’s also a ‘Floydadada’, Mr. Babyface. That’s the one I want next — might even be in SoSo. When I find that I’ll tell the townspeople who I really am, and that I wasn’t killed atall in that giant Lake District gash known as Piers Gill. Instead: Gills Pier. Michigan. 2052.”

But Mr. Babyface knew all about the legend of Pierre Schaeffer. It had been taught in his schools since he was a babyfaced lad.

“Let me show you something, neighbor. *Confidant*.” He scrolls the page down just a bit. “This is me.”