It’s the first artwork he encountered when entering House Greenup. Lemons and limes again, staring him right in the face. And eyes… The Man About Time is reminded that a sim called Residentia exists beside the Humansville one he just examined today. Our Second Lyfe, which now includes the newest continent of Bellisaria with its Humansville, Residentia, and many more sims, is inhabited by Residents according to Linden definitions. *The* Residents are an experimental rock group who disguise their identity through giant eyeball masks. One wonders if Philip Rosedale, creator of Our Second Lyfe, had them in mind when applying this specific name to the inhabitants of his realm. After all, both hail from the streets of San Francisco. But I digress… 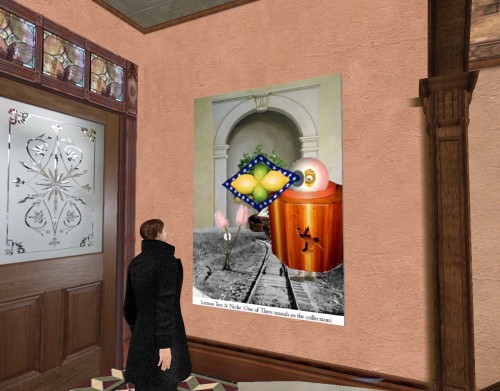 7 Stones townspeople have a decision to make soon. Whether to keep the separated groundside galleries of House Greenup, SoSo, and Gallery Jack holding the entire “Art 10×10” of 100 collages baker b. produced between 2004 and 2009, or whether to combine the 3 galleries into a skybox (literally in this case: a box in the sky) traditionally called the Edwardston Station Gallery, dating back to 2009 and the end of the series. The Man About Time has an important vote in the matter. He doesn’t take citizenship — *residency* — in the virtual village lightly. It’s an honor to be here, he says to town owners Baker Bloch and Baker Blinker the next Wednesday after the third Monday of the month, when he paid his first rent for a Kidd Tower apartment. Almost at the very top: how lucky was he? Only [delete name] lives above him and [delete name] is rarely at home. But, then again, the Man About Time is out and about a lot as well. Best to cast his vote today, before something else comes up in Bellisaria, etc., that demands his immediate attention, past present or future. Thus the visit to House Greenup today, and, afterwards, Gallery Jack, SoSo, and then up in the sky to see the whole displayed in ESG. 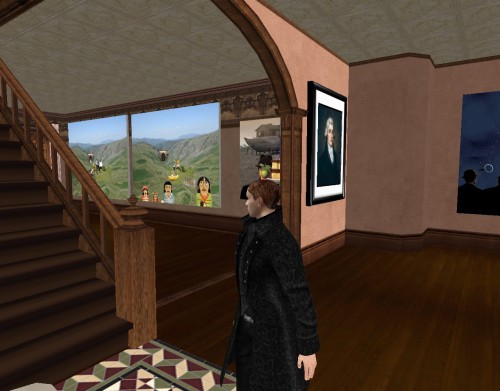 But in staring around at the other collages hanging in the lower floor of House Greenup after ungluing his eyes from the first (which is actually the last: Greenup 20 instead of Greenup 01, although they make an animation with each other and The Man About Time is not the first visitor to make this last-for-first mistake), he’s already made up his mind basically. This house should stay, which means, domino effect, that SoSo must stay which means that Gallery Jack must stay.

“Ahh. ‘Floydada’,” coos The Man About Time after walking around the stairs. “What I’ve been looking for.” 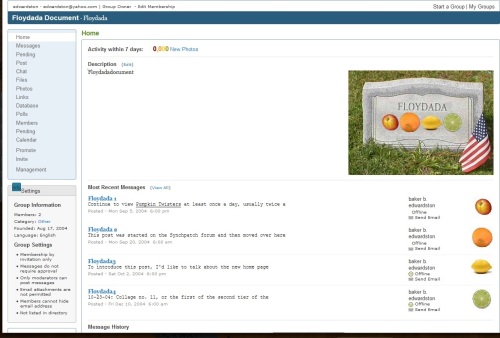